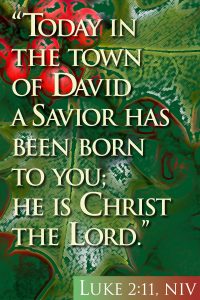 God sent his Son for you. In the fullness of time, God sent Christ. God reveals himself as the sovereign Lord of history, working out even the smallest details. The historical setting was ready for the incarnation. The Greek language was almost universal. Roman roads and peace made travel easier. Caesar Augustus sent out his decree at exactly the right time. You see God’s sovereignty in the Servant passages of Isaiah 40-48. As Isaiah prophesies and celebrates the ending of Israel’s (yet future) exile, he describes Cyrus, by name 100 years before his time, as God’s servant, Isaiah 45:1ff. But in a deeper sense, Israel is God’s servant, Isaiah 43:1; 44:1. Yet neither the people of Israel nor the king of Persia are fully qualified to be the Servant of the Lord. Thus Isaiah sings of a greater Servant, Isaiah 42:1-9 (see Matthew 12:18-29), and Isaiah 53. God does not make last minute adaptations and deal with things in the nick of time. Rather, all is in his control, all is part of his plan. Take comfort in God’s sovereign character as you face the challenges that will come in 2018, the challenges of difficult times which might shake your trust in God, the challenges of good times, which might make you complacent.

More importantly, the old time was full. “[H]istory has awaited the arrival of this Son, because no prior son had put or had even been able to put an end to the law’s condemning curse. . . . This Son-sending, as the New Testament underscores, happens according to divine orchestration: God appointed the right timing of his birth, life, death resurrection, and exaltation (cf. Rom. 5:6).” (David B. Gardner, Sons in the Son: The Riches and Reach of Adoption in Christ, pages 91−92.). An eon came to completion with the coming of Christ. He came to rescue you from the present evil age, Galatians 1:4. The old time, and its accompanying rules and regulations, has been fulfilled and done away. The details of the ceremonial regulations, having served their purpose, no longer bind you. The focus here is on Israel. Understand how the different elements in Israel’s story prepared for the coming of the great Prophet, Priest, and King. You are no longer under the law as a tutor. Picture the death of a father and the custodianship of a minor heir.

God sent his own Son. The eternal Son was sent by the Father. He did not begin to be in Bethlehem! He is Son from all eternity. He is Creator, John 1:1-3. He is fully God, Romans 9:5. Yet, he was born of a woman. God sent his own Son. The persons of the Trinity cooperate in the incarnation. His birth was like your birth, like any human birth. Paul did believe in the virgin birth, but his focus here is on the similarity of Christ’s birth to yours. The Word became flesh.

Why did God do this? God sent his Son to redeem those under the law. Christ was made under the law. The incarnation involves humiliation. This would have been true even without the fall, so great is the distinction between Creator and creature. How much more true when it is the flesh of sinful man that Christ takes upon himself (without himself being contaminated by sin)! Christ submitted to the law. For Christ, the eternal Son of God, the giver of the law, to be subject to the requirements of the law was humiliation. But Christ also came under the penalty of the law. Christ was under law, “born under law,” in order to suffer its penalty—death. The humiliation of Christ is not only the humble circumstances of his birth. Its focus is his death, Philippians 2:5-8. “[W]e are not looking for a teacher and example. We are looking for a Saviour. And a purely human, a merely natural, as distinguished from a supernatural, Christ can never be our Savior. . . . We have such a Saviour presented to us in the Gospels, a Saviour who is not merely man but God. The really difficult thing is to believe that such a Saviour really entered into this world. It is a very blessed thing, but it is certainly not a trivial thing. It is not one of those trivial things that are so easy to believe because they occur every day. It is certainly not a thing that can be believed without a mighty revolution in all a man’s thinking and all a man’s life.” (J. Gresham Machen, The Christian Faith in the Modern World, p. 190).

Christ came to redeem. You need redemption. You are under law, not only in the sense of being obligated to keep God’s commands, but, because you don’t do that perfectly, but you were under the curse of the law. The wages of sin is death, and that is what each of your sins has earned. Sin had you in its powerful grip. You cannot remedy the situation yourself. Only the coming of the God-man could deliver. A man must bear the penalty man incurred. Yet, only God can deliver. Only the infinite sacrifice of the God-man, Jesus Christ, could satisfy God’s justice. Because he did this, you have all the rights of sonship. You have been adopted into God’s family. No longer are you a stranger or a minor. You have the right to all the privileges of God’s children. God sent his Son so that you might be God’s child, Romans 8:14-17. The incarnation summons you to put on Christ, to trust in him, to worship your Redeemer. “Any one who reads the New Testament with the humility of believing devotion and therefore with the reverence begotten of faith must be overcome again and again with the mystery that surrounds the person and work of the Lord and Savior Jesus Christ. As understanding expands and as reverent inquiry seeks to push further and deeper there grows upon the believer the marvel of the Saviour’s person and work.” (“The Redeemer of God’s Elect,” Collected Writings of John Murray, Vol. 1, p. 30).

How unspeakable is the love of God. It’s seen in the incarnation, but that cannot be separated from any of Christ’s work, especially from his death. The Lord who sovereignly created time, who controls all things, said, “It is time!” and sent his Son so that you might be his child. That’s the good news of Christmas!