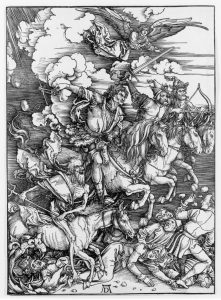 Ask the right questions. Understand where you fit in the grand drama that the Lamb unfolds. The seven churches of Revelation 2 and 3 have been reminded of their sufferings and warned of more trials to come. But along with that is the assurance that in Christ they overcome. John writes, not just for those seven churches, but for the church of all time, for you today as well. We may be curious about the future, but John does not write simply to satisfy curiosity. He is not writing future history in puzzle form to be deciphered by those who are smart enough. He writes to encourage the church. He uses word pictures to show the unfolding of God’s plan and to show you how you are connected with it—where you fit in the story.

Ask “why?” Dennis Johnson, in Triumph of the Lamb, reminds us that we, like the disciples, have a tendency to ask the wrong questions: When? What will be the signs? (Matthew 24:3; Acts 1:6). In both situations Jesus points the disciples away from the “when” question and calls them to be busy about the work he is giving them to do (Matthew 24:36; Acts 1:7). The “why” goes much further in calling you to live in fellowship with your Lord and simple trust in him. “We infer that God’s secret plan for history lies hidden in the sealed scroll; so when the Lamb takes the scroll from his hand and begins to break its seals, we look though John’s eyes for answers to our questions, When? and What? and How long? Instead of answering our questions, the prolonged process of preparing to unroll the scroll presents a series of portraits that answer the question, Why, if the Lion-Lamb has conquered, does the world continue to be a place of evil, violence, and misery?” (Dennis E. Johnson, Triumph of the Lamb, page 117).

The Lamb sends judgment on the earth-dwellers. From heaven four horsemen are sent out on the earth. As the Lamb breaks the seals he is sending messages to his suffering church. It may not be the message they had hoped for or expected. We, like them, would like to see things go smoothly and easily for the church. As each of the first four seals are broken, a thunderous voice from each of the four living creatures around the throne summons a horseman. The four horsemen are dramatic and disturbing. They go out into the earth wreaking destruction. Albrecht Dürer’s famous woodcut, published 520 years ago, catches the drama and destruction. Once again Revelation draws on Old Testament imagery. Zechariah 1 begins with a mysterious figure with colored horse behind him (Zechariah 1:8ff.). That is expanded in the vision of Zechariah 6, where chariots pulled by these colored horses represent the spirits of heaven going out through the earth. They bring rest for God’s people, but judgment for the nations in rebellion against him. In Revelation 6, the white horse is parallel with the other horses of judgment (don’t identify this with the appearance of Christ in Revelation 19). The rider goes out conquering. Not unexpectedly, at the breaking of the second seal, a rider on a red horse goes out waging war. The rider on a black horse carries a set of scales, and a voice from among the living creatures describes famine conditions, in which a day’s wages pay for a daily allotment of wheat or a little more barley. Yet the oli and wine are untouched. Some, it seems, perhaps the rich and powerful, are unaffected by the famine. The fourth horseman is mounted on a pale (literally “green”) horse, representing death with Hades, the realm of the dead in his wake.

The Lamb is in control—even when calamities come. At first glance the tumultuous ride of the four horsemen may seem like small comfort to a suffering church—whether in the first or the 21st century. But notice where the four horsemen bring their destruction: on the earth. Revelation contrasts those in rebellion against God, whom it describes as dwelling on the earth, with the followers of the Lamb, whose proper residence is heaven. The horsemen are going out with power over the earth. They are a beginning of the judgment that the Lion-Lamb will bring against those who oppose him. Note also the limitation—they are given power over a quarter of the earth. This is not full destruction. It is not the final judgment—not yet. Both Matthew 24 and Luke 17 warn against premature expectations of the end. Be cautious about assuming that the wickedness you see means that the end is at hand. The events described in Matthew 24 and Luke 19 are things that God’s people in every age can look at and think he is coming soon. They are given, not for us to predict dates, but to call us to live in expectation of Christ’s return. Judgment on the earth may seem like small comfort, because God’s people often suffer along with those who are being judged. Judah deserved the exile, but godly people like Daniel and his friends were carried into captivity as well. But take comfort in the knowledge that the Lamb has not forgotten his people. He is bringing in his kingdom. And even in this age he brings judgments against those who oppose him and his people.

The martyrs cry out, “How long?” The souls of the martyrs cry for justice. The fifth seal draws your eyes from the earth to the heavenly temple. There stands an altar, taking the place of both the altars of the tabernacle and temple, where there was one for sacrifice, another for offering incense. Under this altar are the souls of the martyrs, those who have been faithful. Their cry reflects the longing, not only of martyrs, but of all of God’s people. How long? How long until the Lamb comes? How long until the Lord’s return. Their cry for judgment is not one of personal vengeance, but rather is a longing to see the kingdom of God triumph. We reflect that prayer when we pray, “Thy kingdom come.” Look at the suffering of God’s people in the world today and echo that cry. Understand the depth of your own struggle against sin, and join in their prayer.

The response is “Wait!” First, they are given white robes, a sign of victory, like the overcomers in Sardis, Revelation 3:5. They may have been trodden down by the world, but the perspective of heaven is that they are the victors. You might expect the words of Jesus in response to promise a speedy end to their waiting. Instead, they are told to wait. They are to wait until the full number of their brothers who will be martyred like them is fulfilled. That seems like a strange reason for delay. We are more comfortable with waiting while the gospel is preached throughout the world, Matthew 24:14. We understand that God calls us to patience because he is merciful, not willing that any perish, and that is a reason for delay, 2 Peter 3:9. Between the time of the first and second comings, the spread of the gospel is marked by the suffering of the church (not unexpected, since we are united with the one who suffered and died, and then was raised. Johnson puts it graphically: “The days on God’s calendar are marked off, one by one, in the blood of the martyrs.” (Dennis E. Johnson, Triumph of the Lamb, page 126).

The wrath of the Lamb will be revealed. Earth and sky shaking judgment is coming! Delay does not mean that God has forgotten his people nor that he will not come in judgment. Earth shaking marks the presence of God, Psalm 97:1-6; Haggai 2:6, Hebrews 12:26. Joel 2:10–11 marks the day of the Lord with the shaking of the earth. The breaking of the sixth seal takes us to the end of the age. Whatever limitations there have been on God’s anger against wickedness will be retracted. The wrath of the Lamb (never forget that he is also the Lion!) goes out against those who have rebelled against him and persecuted his people. Judgment may not be a popular topic, but Revelation assures you it is coming. John will circle back and describe other events, but he will never let you forget that judgment is coming!

Will you be able to stand in that day? No matter how rich and powerful, great and small, none of the inhabitants of the earth will be able to endure the wrath of the Lamb. Collapsing mountains are a vain hiding place. Revelation 6 pushes you to ask, where do you stand in relationship to the Lamb? Are you one of those for whom he was slain, one of those for whose sins he suffered and died? Or are you in rebellion against him? There is no neutral ground in this drama. You are for or against the Lamb—and the consequences are eternal.

With the saints under the altar, you can cry, How long?! After all, the book ends with a prayer, even so, come, Lord Jesus. But don’t get distracted by the the when question. Instead, rest in hope because of the wisdom of the one who sits on the throne and because of the faithfulness of the Lamb that was slain.