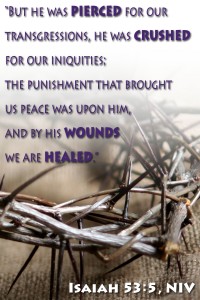 The Apostle John takes you to the foot of the cross. This brief scene, John 19:25-27, is moving, but as important as Mary is, she is not the central figure. In the midst of his suffering, Jesus takes time to speak to his mother and to commit her to the care of the disciple whom he loved (apparently John, who tends to avoid naming himself).

You can imagine the suffering of Mary as she watches the agony of her Son. Yes, Jesus is concerned about her. He prayed for the four soldiers who nailed him to the cross. He spoke with the thief. He entrusts Mary to John. He died, not for a concept or an ideal, not for humanity in the abstract, but for each one of those the Father had given him. You know that he continues to be concerned about you, and each of his people. Yet, if your focus is on Mary, you have missed the heart of John’s scene. And if you see it primarily as a sentimental picture of filial love and concern, you have misread the account.

The Savior is isolated as the sin-bearer. Often relatives are called to death bed. If there is any place we do not want to be alone, it is as the final, great separation takes place. My sister blogs: “In all my years of nursing, I have particularly enjoyed working with cancer patients and often cared for them at death. My goal was to never let anyone die without someone there with them; thus many were the patient’s hands that I held as they neared death.” There is a certain cutting of ties, an isolation in Jesus’ action. He is replacing the mother/son relationship between him and Mary with a mother/son relationship between John and Mary. In a real sense, Jesus is going to face death alone–even though there is a thief on either side, soldiers at the foot of the cross, and not too far distant both the faithful women and the mocking crowds. Yet Jesus is alone as the sin-bearer. Jesus is going to his death isolated, cut off even from family ties, not because of any sin on his part, but because he is bearing your sin and that of all of his covenant people. Yet, because of that isolation, you become part of his family, his people. You are never isolated from him.

Listen to Jesus speaking not just as a Son of Mary but as the Son of Man. He had addressed his Father about those crucifying him, he had spoken words of promise and certain hope to the dying thief. Now he addresses the family member closest to him, his mother. His remaining words will relate directly to himself in his Messianic work, and to is Father in heaven.

What must be going through Mary? There she is at the foot of the cross, witnessing the execution of her son. With her is the disciple Jesus loved, John’s indirect way of identifying himself. By his presence, if not in words, he is saying, “Well, Mary, if you must go and witness this, you are not doing so alone.” Is Mary remembering the words of Gabriel about the throne of his father David being given to her son–and wondering? Is Mary thinking about that day, when her Son was 12, and after frantic searching, she and Joseph found him in the temple, and he had rebuked her for worrying with that enigmatic remark about being about his Father’s business? Is Mary remembering the incident John records at his Gospel’s first mention of her name, when she informed Jesus of the shortage of wine at the wedding in Cana? Jesus had told her that his time had not yet come.

Yes, this is his time, and that is why Jesus entrusts Mary to John. His work of the next few hours and days involves not his family, but his people. He acts, not just as the Son of Mary, but as the Son of Man, the Messiah, the Redeemer. But before he fulfills the remaining portion of his suffering, he says to Mary, perhaps gesturing with his lips or a glance, “Woman, behold your son.” To John, the disciple whom Jesus loved, “Behold, your mother.”

Mary was having to learn a difficult lesson. As much as she loved her Son (and as much as we properly honor her for being the mother of our Lord), she would have to put that relationship in a secondary place. The one who had submitted to her, who had obeyed her, was now the Lord to whom she submitted. The care that a son would provide would now be provided by John. Mary would have to see her Son, as indeed she did, first of all as her Savior. Herman Ridderbos writes: “Mary will from this moment on step back as his mother and uniquely reflect the image of the community that remains behind on earth. The disciple whom Jesus loves no less significantly represents those whom Jesus has bound to himself from the beginning to be his witnesses and to continue his work on earth. . . . It is in this light that we must view Jesus’ final statements to these two and the words with which the Evangelist concludes this passage: ‘And from that hour the disciple took her into his own home.’ This is not merely a historical note pertaining to Mary’s place of residence after Jesus’ death but a salvation-historical reference—in the manner of the Fourth Gospel—to the new ‘family of God’ that from that hour took form as a result of Jesus’ final testamentary disposition.” (The Gospel of John: A Theological Commentary, pp. 613-614)

Jesus had called those who hear God’s Word and put it into practice his mother and brothers, Luke 8:19-21. Because Jesus was dying for you, as you trust him your relationship to Jesus is as close as Mary’s was. In fact, it is even closer than the mother/Son relationship. It is just as close as the sinner/Savior relationship which he had with her, for it is the same relationship.

Stand at the foot of the cross with John. Do you see, not just Mary and the Son of Mary, but the Son of Man. Do you see him concerned about his mother, yes, but also about the thief and about you?