Hear the Voice of the Risen Savior 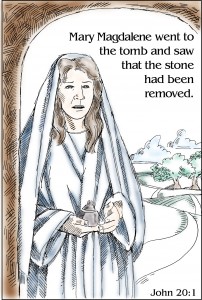 In John 20:10-18, the Gospel of John brings home the reality of the resurrection of Jesus by showing you Mary Magdalene, and her transition from being blinded by fearful grief to coming to joyful trust and service. The chapter opens with an emphasis on darkness, echoing the opening note of John’s Gospel, that Jesus is the light that shined in darkness.

It is to this woman, whom Jesus had delivered from demon possession, that Jesus now reveals himself as the risen Lord. John inserts into the flow of her story the account of Peter and he running to the tomb, and John, as he sees the evidence of the empty tomb with the graveclothes still lying there, comes to believe that Jesus is alive. But Mary, back at the tomb and blinded by grief and her tears, does not even seem to realize that, she is speaking with angels. She asks about the location of the body of her Lord. Then Jesus, unrecognized by her, asks her why she is weeping. It is only when he speaks her name, “Mary,” that she recognizes him.

In John 10:3 Jesus had spoken of himself as the Good Shepherd who calls his sheep by name. He spoke Mary’s name, and brought her to recognize him as her risen Lord. He continues to call his people, not just outwardly by the reading and preaching of the Word, but by speaking their names to their hearts by his powerful Holy Spirit, uniting them to him by faith.

John Calvin comments on Jesus speaking Mary’s name: “That voice of the shepherd, therefore, enters into Mary’s heart, opens her eyes, arouses all her senses, and affects her in such a manner, that she immediately surrenders herself to Christ. Thus in Mary we have a lively image of our calling; for the only way in which we are admitted to the true knowledge of Christ is, when he first knows us, and then familiarly invites us to himself, not by that ordinary voice which sounds indiscriminately in the ears of all, but by that voice with which he especially calls the sheep which the Father hath given to him.”

Mary responds with Rabboni, which means “Teacher.” Now she knows that her Lord is alive. No, she cannot continue to hold onto him, for he is about to ascend. But she joyfully goes to the disciples with the news that the Lord is alive.

If the risen Savior has called you by name, you know him in a real sense, better than the angels do. He is your Redeemer. In him you have become the sons and daughters of God. The Light has shined in the world!