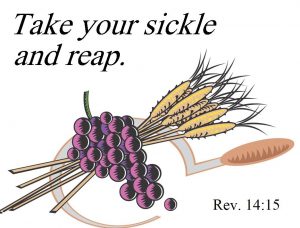 Perhaps the month of May seems like a strange time to talk about a harvest. But you plant, looking forward to the harvest. The Passover (or Feast of Weeks as it was earlier called) celebrated the harvest, and Revelation 14:14–20 takes you to the final harvest at the end of this age.

Rejoice in the final harvest. The glorious Son of man uses his sickle to harvest his crop. Waiting for a harvest may be difficult, but John assures you that the harvest time will come. This last vision in a series that began in Revelation 12 takes you to the end of the age. Look at the one like a son of man, sitting on a cloud, wearing a crown, and compare it to Daniel 7:13–14. Remember Jesus’ most common self-designation. Some have questioned identifying this figure with Christ because of the mention of another angel — but that comparison likely simply is to other angelic figures already mentioned. And while it may seem strange for your Lord to be receiving a message from an angel that now is the time for harvest, remember that the incarnate Lord said that only his Father knew the time. The Son is here carrying out his messianic work to its conclusion. The harvest imagery of Joel 3 is picked up by John as is the language that Jesus uses in his parables in Matthew 13. The grain is brought in safely, while the weed are destroyed.

Though delayed, the time for harvest finally comes. One of the barriers to Jesus’ claim to be the Messiah was the fact that his first coming did not bring in the harvest of the final judgment. Even John the Baptist seemed to wrestle with that issue, Luke 7:18–21. Jesus’ parables about the sower and the harvest make the point that God has his purposes in delay, bu the delay does not mean that the harvest is not coming. The martyred saints under the altar had been crying out, “How long,” and had been told to wait. Now the time of waiting is over, and the Son of man is gathers in his harvest. “The common expectation was that the Messiah would immediately execute the harvest judgment when he appeared, but Jesus’ parables (the sower, the tares among the wheat) taught that he came to inaugurate the long-awaited kingdom of God not as a grim reaper but as a patient sower (Matt. 13:1–30, 36–43). Through sowing the word a seed, apparently so vulnerable to the world’s hostile environment, Jesus would launch a harvest of grace in his first coming and continue it through the church’s gospel witness (John 4:35–38). In the story of the tares Jesus made clear that the final harvest foretold through the prophets, when when weeds are separated from wheat, would come only at ‘the end of the age’ (Matt. 13:40). John now sees this final separation in his vision.” (Dennis E. Johnson, Triumph of the Lamb, p. 209).

Beware of coming judgment. The Lord displays his just anger in the harvest of the grapes. The harvest is blessing for those who trust in the Son of man. But for those who oppose him, for those who have persecuted his people, the harvest imagery turns to wrath and judgment. As Jesus explains the parable of the wheat and the weeds in Matthew 13:39, the harvest is the end of the age, and the harvesters at the angels. But here in Revelation 14, instead of weeds, it is a harvest of grapes (John will return to fire of judgment later in the book). John uses the language of Joel 3 and Isaiah 63:1–6 to describe the Lord crushing his enemies, using the imagery of treading out the grapes in the winepress. The city seems to be the city of God, and outside of it judgment, catastrophic judgment, takes place.

God’s wrath is good! You may cringe at the strong picture that John draws. We may be uncomfortable with God describing himself as being angry, but that is because our anger, even when we are justly angry at some evil, is so easily mixed with sin. But God’s anger is perfect and just:

Anger, just like all things in life, has to begin with God (Genesis 1:1). First, we need to reevaluate how we think about the Lord and his anger. Mostly, we assume that anger is the dark side of God’s character that we need to keep hidden from the world.

Anger is one of God’s most beautiful characteristics – in fact, his anger is a bright hope for the world. Because he is righteously angry, we can rest assured that everything sin has broken will be restored. (Paul Tipp, https://www.paultripp.com/wednesdays-word May 14, 2018)

This judgment is vindication for suffering saints, both in the first century and today. Before you get to the new heavens and earth, before you reach the place where there is no death, pain, mourning, or tears, the blood-thirsty dragon and all his works need to be destroyed. God is both good and just, even in his anger.

Live as a harvest time people. The Spirit makes Pentecost the beginning of a greater harvest. If you grasp the way that the Old Testament Feast of Weeks anticipated harvest, you can appreciate the waiting involved as you look for the Son of man to swing his sickle at the final harvest. Leviticus 23:15–22 (given while Israel was still wandering in the wilderness) called on them to count—after the Passover, from the Firstfruits 50 days, and then to celebrate the Feast of Weeks. Because of the counting of 50 days, it became known as the Feast of Pentecost. Psalm 67 came to be used as part of Israel’s anticipation. And the feast became associated with the giving of the Law at Sinai, because it was 50 days after leaving Egypt that Israel came to the mountain. It was at Pentecost that the Lion of Judah, the Lamb that had been slain as the great Passover lamb, but now had been raised, it was then that the ascended Lord poured out his Spirit on the fledgling church he had established. Before his description of treading the grapes, Joel (at 2:28–29) prophesies the outpouring of the Spirit, the text that Peter chose for his sermon in Acts 2. Pentecost was not simply about giving thanks and praise to God for the barley harvest, as important as that was. It would be about the Son of man beginning to harvest a multitude that no one could number from every tribe and nation. Notice the gift of language tongues which accompanied the pouring out of the Spirit. “[W]hile Pentecost/Weeks had always been a harvest festival, it was only after the events of Acts 2 that the nature of the harvest could be understood. It was not a harvest of wheat and barley that was on God’s mind and heart but rather a celebration of the harvest of redemption that had begun with Christ himself. He broke open the grave on Firstfruits as the ‘firstborn of the dead’—not just of dead bodies, but of what dead bodies evidenced: a dead-in-sin world (Revelation 1:5). And if he was the first sheaf, this fuller harvest was a bin buster, absolutely cosmic in scope.” (John R. Sittema, Meeting Jesus at the Feast: Israel’s Festivals and the Gospel, p. 84).

Be God’s harvest people. Jesus, when crowds from Sychar came to him in response to the testimony of the woman at the well, told his disciples to pray that the Lord of the harvest would send out workers. The Pentecost harvest would come about, not by angels with trumpets proclaiming the resurrection and ascension of Christ, but by the apostles announcing the good news. As Acts traces that harvest, following Stephen’s martyrdom, the believers scattered, while the apostles remained at Jerusalem, but where they went they spoke of the good news. The harvest began, and it continues to go on. God calls you to be a harvest people by expanding the scope of the reaping of the grain. But he also calls you to actually be the harvest that the Son of man reaps and brings in to his Father’s house. He has given you the privilege of being what the Son of man will harvest on that last great day.