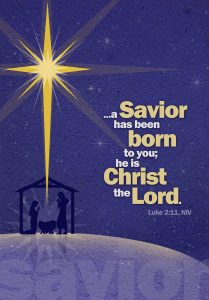 In the familiar story of Luke 2:8-12 an angel comes to shepherds outside of Bethlehem with joyful news. What makes the news good? And is that encouragement spoken to you—who may not happen to be feeling happy?

Good news replaces fear. Stand in awe of the glory of the Lord. An angel of the Lord appeared to the shepherds in the dark, quiet fields outside Bethlehem. These courageous men were terrified by the glory of the Lord which shone around them. This shekinah glory had led the Israelites in the wilderness, had settled on Mt. Sinai as God gave his law to Moses, and then was reflected from Moses’ face. The glory of the Lord filled the Tent of Meeting at its dedication and later the Temple at its opening. This glory had nearly undone Isaiah when he saw it filling the temple. What frightened the shepherds was not simply the brilliance of the light or the unexpectedness of the angel’s appearance. Rather, it was the sudden consciousness that they were sinners, and they were in the presence of a perfectly holy being.

The good news comes to humble people. The angel announces good news (the gospel, or evangel). The description of Bethlehem as “the town of David” recalls God’s covenant promise to David, amplified by Isaiah, and earlier mentioned to Mary, Luke 1:32,33. The glory of the Lord is present, not in judgment, but deliverance. That temporary shining in the fields of Bethlehem reflected the permanent appearance of glory of the Lord in human flesh. You have assembled in the presence of the holy God. His glory may not be evident to your naked eye, but he is holy. And you and I are not only creatures, we are sinful creatures. You have reason to be in awe, but terror is gone as you trust in this Child. This good news comes to ordinary shepherds. The connections with the shepherd-king, David, whose home town had been Bethlehem are evident. But ordinary shepherding had been going on for the past millennium, since the time of David. God is concerned with the poor and humble, as Mary had sung, Luke 1:51-53. The news is for all the people. This swaddling cloth-wrapped child is the fulfillment of the promise made to Abraham two millennia earlier, that in him all the nations of the world would be blessed. No less than the shepherds, we are people who stand in the muck and grime of this world. You face problems in your families, in your work, with your neighbors. But you are the people to whom this good news comes.

Rejoice in the birth of the Savior. This Baby is Savior! The title,“Savior,” is not used extensively in Luke’s Gospel. To his first century readers the word would be familiar as a title appropriated by the Roman emperor and other rulers of the day. Luke’s use of it here challenges you to entrust yourself to this Savior’s protection, to submit to his authority. The Savior is none less than Christ, the Lord. Don’t miss the sweeping nature of this claim. The Baby is both the Messiah (Christ) and Yahweh, God himself. Despite the humble circumstances of his birth, this Baby is God himself. “Mary Did You Know” by Mark Lowry and Buddy Green asks: Mary did you know, “This child that you’ve delivered / Will soon deliver you.” and “When you kiss your little baby / You’ve kissed the face of God.” “The thought of the incarnation is stupendous, for it means the conjunction in one person of all that belongs to Godhead and all that belongs to manhood. It would have been humiliation for the Son of God to have become man under the most ideal conditions, humiliation because of the discrepancy between God and his creation, between the majesty of the Creator on the one hand, and the humble status of the most dignified creature on the other. But it was not such an incarnation that took place. The Son of God was sent and came into this world of sin, of misery, and of death.” (“The Person of Christ,” Collected Writings of John Murray, Vol. 2, p. 133).

Rejoice in his birth. Because of who this Child is, because of what he will do, great joy replaces your fear. God’s holy anger against your sin is satisfied by the Son, whom he sent into the world as your Savior. The joy more than compensates for the distresses of our present life. Part of the reason for our joy is the unexpected way that God continues to touch our lives, for the mysterious way in which he unites us, standing with our feet in the muck and grime of our lives, with the Savior, now no longer in the manger, but seated at the hand of the Father in the glory of heaven. “ By calling it great joy, he shows us, not only that we ought, above all things, to rejoice in the salvation brought us by Christ, but that this blessing is so great and boundless, as fully to compensate for all the pains, distresses, and anxieties of the present life. Let us learn to be so delighted with Christ alone, that the perception of his grace may overcome, and at length remove from us, all the distresses of the flesh.” (John Calvin, Commentary on the Gospels, at Luke 2:10).

Receive the sign the Lord provides. If the appearance of the angel was startling and frightening, the message he had was even more difficult to grasp. Lest the shepherd be put off by the humble circumstances in which they would find the Child, the angel gives them the sign that he will be found in a manger, wrapped in cloth. Lest we doubt the reality of what we can’t see with our eyes, he still gives us signs, particularly the signs of baptism and the Lord’s Supper, which, like the sign given the shepherds, summon us to come and worship the King and assure us of his blessing. The message of the angel motivated the shepherds to go and see what God has done. The good news that God has come is spoken to you as well, calling you also to come worship and serve the King.

This third (and last) visit of an angel recorded by Luke in his narrative of the birth of Christ struck terror in the hearts of the shepherds. But his good news to them has come to your ears as well. The message, including the sign, draws you as well as the shepherds to the King.