Going up to the Feast of Tabernacles–or Not 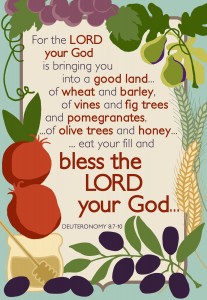 Jesus forces you to make a decision about himself, his words and his works. He calls you to make a right judgment, John 7:24, but that right judgment about Jesus involves the whole direction of your life. It means choosing to do God’s will, John 7:16. Are you going to stand at a distance from him, evaluating him by your standards? Or, will you bow in humble worship and serve him?

To go up to the feast or not? John frames portions of the ministry of Jesus in the context of Jewish feasts. The important teaching on the bread of life is given in connection with the Passover, John 6. Now, about six months later, as John 7 begins, is Sukkoth, the Feast of Booths, or, Tabernacles. That feast (read about it in Leviticus 23:33-44) was a combination of a harvest-thanksgiving celebration and remembering God’s provision during the time that Israel was in the wilderness. Often this was the best attended of the feasts in Jerusalem, and included a week-long celebration. Children joined in shaking lulavim and the etrog or citron was a tasty treat. The people built booths to remember the temporary housing in the wilderness, and celebrated joyfully. Like a Thanksgiving hymn, Psalm 118 ends with a forward tilt, anticipating one coming in the name of the Lord.

The celebrations included a water pouring ceremony, which provided background for Jesus’ gracious invitation to come to him and drink, John 7:37. There was a ceremonial lighting of huge lamps, and Jesus in John 8:12 speaks of himself as having the light of life (then in John 9 that is contrasted with blindness).

The Feast of Tabernacles was rich in recalling the history of God’s care for his people, but many of those celebrating it belonged to the world, rather than to God. Jesus’ brothers, who would not become believers in him until after his resurrection, urged him to go up to the feast. With a politician’s eye for crowds and opportunities, they see the feast at Jerusalem as the place to make up for the followers that had abandoned him in Galilee. But Jesus says, as he had to his mother at the wedding in Cana, that his time had not yet come. Joining the huge procession to Jerusalem could well have triggered something like the (later) triumphal entry–and his death before he had finished what the Father had given him to do. He refuses to go up. You can have all kinds of celebrations and religious ceremonies. However, if they are not done for the right reasons and if they do not focus on Christ, they are worthless. Have Christ consciously at the very center of your life. Otherwise, whether you are religious or not, you really belong to the world.

Jesus does go up to the feast secretly in the middle of the feast, but then begins to teach openly in the Temple. That raises questions about the source of his teaching. He had not received rabbinic training, but taught with wisdom, knowledge, and authority. As questions come up, Jesus gives two basic principles to guide his original hearers and you in your relationship with him.

First, judge justly. Make a righteous judgment, John 7:21-24. Leviticus 19:26 calls for justice in measurements–because Israel belongs to the Lord. The Messiah, the branch from Jesse’s stump, will judge righteously. Jesus points out that the law required circumcision on the eighth day, which was followed, even if that day was a Sabbath. He, instead of performing a minor surgical operation that was part of the ceremonial law, had healed the lame man completely (John 5). Because of this the leaders of Israel were seeking his death.

Judging righteously means putting God’s Word ahead of your own views. Eve not only listened to Satan questioning what God had said, but she made his command more restrictive than it actually was. Resist the compulsion to explain in ways that go beyond Scripture. Learn to walk the fine line of going as far as Scripture does, but no further. When you find yourself saying, God can’t possibly mean something–stop!

Second, learn that the path to understanding leads through obedience. In John 7:16 Jesus reverses the order we might expect. Conventional wisdom might say, first determine whether Jesus’ words come from God, then decide to follow him. But Jesus calls you to chose to obey. In obeying God, you come to the conviction that Jesus is not seeking his own glory, but rather is honoring the Father, who, in his Son, is saving the world. Faith in Christ is not first of all an intellectual decision (though it certainly involves the mind), but a commitment of your heart and will. As you make that commitment you come to realize that you are doing so because the Father has given you to the Son. One of our besetting sins in Reformed circles is making sure that we have our doctrine right and then thinking that God is going to look on us with favor because of that. Doctrine is important, but if your doctrine is true, it starts with obedience.

Herman Ridderbos writes: “He forces them [his hearers] to make a decision with regard to the intent that shows in his words and works. Can they, and dare they, brand them as evidence that he is seeking his own glory? Or must they acknowledge that all his words and works are designed to heighten the glory of him who (in Jesus) loves and seeks out the world and calls it to repentance and faith?” (The Gospel of John: A Theological Commentary, p. 263).

Yes, join in celebrations of thanksgiving and praise. But make sure that you keep Jesus at the center of what you are doing.