Go Outside the Camp 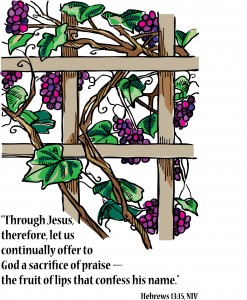 Local geography can be important, even when using a GPS device. Hebrews 13:12-16 focuses on the location of the sacrifices on the Day of Atonement in the Old Testament, and on the geography involved in the crucifixion of Christ.

Go outside the camp. Jesus suffered outside the gate. You have an altar better than that at which the priests served. Many Old Testament sacrifices were meals for those making the offering, and for the priests. Some were completely burned instead of being eaten. Christ’s sacrifice was offered on a spiritual, heavenly, altar. Those who cling to the Old Testament ceremonies are excluded from Christ,but you, who trust him, have the right to share in that altar. Since Christ’s offering there is no place for a physical altar in the New Testament church. (The communion table is not an altar. Archbishop Laud said of the Scottish Presbyterians in 1633: they had “no religion at all that I could see–which grieved me much.”) Christ’s altar is far better than any earthly one ever was. The offering on the Day of Atonement was burned outside the camp. The blood of the animal was used in the Most Holy Place, and its body was burned outside the camp, Hebrews 13:11; Leviticus 16:27. The ceremony pictured God’s judgement on sin. Both the living and the dead goat were removed from the camp.

Christ suffered outside the gate. Christ’s death paralleled the Old Testament sacrifices. The animals were taken outside the camp. Christ was bearing the wrath of God against sin, and thus Golgotha was situated outside Jerusalem, John 19:20. Christ died to make his people holy. The animals which were killed to atone for the sins of the people were types which were fulfilled in Christ. His death actually made his people holy.

Therefore, go to Christ outside the camp. Christ was rejected. To have his messianic claims rejected was a stigma. To be cast out and crucified added to the disgrace. This was the final rejection of the Messiah by the covenant people, Isaiah 53:3. The author may be thinking of Moses pitching the tent of meeting outside the camp, Exodus 33:7. The godly had to leave the camp to go to God. If Christ has been rejected and cast out by the world, you must go to him. Your choice is between Christ and the world that rejected him, John 1:10,11. To go to him should not be hard for a Christian, for to whom else should we go?

There is cost involved. Bear Christ’s disgrace. Crucifixion was a disgraceful, shameful death, reserved for slaves and foreigners. Even the Jews would not let the bodies hang over the Passover. That disgrace now falls on you. Back of all the reproaches and sufferings of God’s people stands Christ, Hebrews 11:26. Look for the city to come. You have been rejected by the world–but your future does not lie with this world. Hebrews fixes your eyes on the consummation of your salvation. To go outside the camp bearing Christ’s reproach means that you are a stranger and pilgrim here, but you are also a citizen of the city whose builder and maker is God.

Offer your own sacrifice. Offer the sacrifice of praise. Bring your offering because Christ offered himself. “Therefore” of verse 15 looks back to Christ’s offering in v.12. The Old Testament fellowship offering showed gratitude for God’s blessings, Leviticus 7:12. You, as a New Testament believer, bring an offering because of the gift of Christ’s work in your place. Bring your offering through Christ. “He reminds us in passing that we cannot honestly call upon God and glorify His name except through Christ as our Mediator. It is He alone who hallows our lips which are otherwise defiled to sing the praises of God,who opens the way for our prayers, who in short performs the office of Priest by standing before God in our name. . . . If we want to sacrifice to God, we must call upon His Name, make known His goodness by giving thanks, and do good to our brethren. These are the true sacrifices with which the Christians should be engaged, and there is neither time nor place for any other.” (John Calvin, Commentary on Hebrews, at 13:15-16). Even the Old Testament recognized the coming end of the system of sacrifices, Psalm 50:12-15. Christ is your intercessor as you come to God for forgiveness and grace, Hebrews 4:15,16, but his intercession is no less necessary as you come with your offering of thanks and praise. The exalted Christ is perfectly equipped for this work. You are called to be a worshiping community. You offer, not an animal along with cakes and oil, but praise, the fruit of your lips, which parallels the language about the first fruits as an offering, Exodus 23:19. You as Christians are called to worship, Hebrews 12:28. The book emphasizes that you are a community a “people of God,” Hebrews 11:25; 2:17; 4:9; 13:12. You have become part of the worshiping community, Hebrews 12:22. Thus, don’t neglect worship, Hebrews 10:25. As you worship, confess his name.

Offer yourself as a sacrifice. Remember to do good. This is sacrificial giving. Doing good and sharing involve giving yourself, v.13. Sacrificial giving is not first of all giving money, but rather, offering yourself to God. It is part of your service to Christ, Matthew 25:40. God is pleased with such sacrifices. The Father’s acceptance of Christ’s offering is proof that he will be pleased with what is truly offered through Christ.

Christ sacrificed himself outside the gate to make you holy. Go to him, bearing his disgrace. Your response of gratitude must be a sacrifice–of praise and worship, and ultimately of yourself.