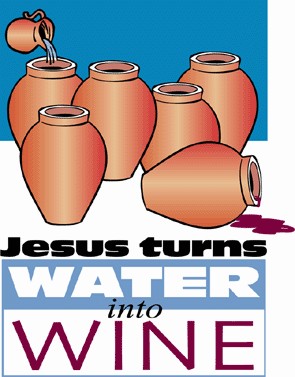 Can you taste a difference between wine that comes out of a plastic lined box and that which comes from a bottle produced at one of Yamhill County’s finer wineries? I am not a wine connoisseur, but even I can distinguish them. The first miracle of Jesus that John records (John 2:1-11) involves Jesus making not some cheap wine, but rich, good, glorious wine–in abundance. And he made it from water!

Jesus and his disciples were invited to a wedding feast in Cana, a small town in Galilee. The mother of Jesus was there, apparently helping with arrangements. Wedding feasts were times of celebration which could last for days, or even a week. But, embarrassingly, at this wedding they had run out of wine.

These were times of expectation, hope for the coming of the Messiah. According to the prophets, that would be a time of abundance of food and good wine, Isaiah 25:1-8. (Although the Bible clearly condemns intoxication, or drunkenness, to use Scripture’s blunt language, the problem lies not with the substance but with its misuse.) Mary comes to her Son and explains the problem. She knows he is the Son of God.. Perhaps this is the time for him to begin his public work.

Jesus’ response to her is not disrespectful, but it is blunt: “Dear woman, why do you involve me? My time has not yet come.” As close as the relationship is between mother and Son, that is going to be replaced with a different one. Mary has to learn to become the disciple of her Son, just as we need to learn not to impose our expectations and demands on him. She does learn that, instructing the servants to do what he says. For Jesus, “my time” refers not to an appointment on his PDA, but to his coming death and resurrection. Yes, Jesus could work a miracle, and was about to do so. But this was not some kind of magic show. Rather, it was the first of a series of signs that would point to his work of suffering and dying for his people.

John tells us that six stone water jars were standing there. Jesus told the servants to fill them with water. The capacity of each was 20 to 30 gallons. John emphasizes that these jars were used for purification ceremonies. Those ceremonies had been required for God’s people. It showed them that sin, rebellion against God, polluted them. Even mores serious than external dirt, sin corrupted from the inside out. Of course, ceremonial washings could never actually remove sin.

Jesus tells the servants to draw some of the water and take it to the master of ceremonies at the wedding. What had been water had become wine, not some cheap beverage, but rich, fine, wine. Without making a show of it, Jesus had provided an overwhelming abundance (120 to 180 gallons) of the finest wine!

Do you have a sense of corruption and pollution in your life? Jesus’ miracle, involving the jars used for purification, makes the point that he, not the symbolic water, provides real purification. His death and resurrection remove the guilt and pollution of all of the sins of those who trust him. He is the real thing, the genuine article.

Some have struggled with this miracle and tried to come up with naturalistic explanations. But if Jesus really is the person this Gospel tells you he is, the Creator of all things who became man to reveal God’s glory to us, this miracle is not to difficult for him. If he formed the galaxies, making abundant wine from water is no too hard!

John identifies this miracle as the first of the signs that Jesus did. A sign points to something. The glory of Jesus is being revealed here. Rich, abundant wine not only bless the wedding party and their guests, it identifies Jesus as the one bringing in the kingdom of God. Quietly in this miracle Jesus transitions from being a guest to the position of host, providing what was needed. This sign looks ahead to another, greater marriage feast described at the end of the Book of Revelation. There Christ has become the bridegroom, and the church, cleansed by the blood of the Lamb, has become the bride, adorned for her husband. There is the invitation to take part in the wedding feast of the Lamb!

Look at what Jesus did at this wedding feast, and ask yourself, am I ready for the real wedding feast? Has this sign led me to Jesus?