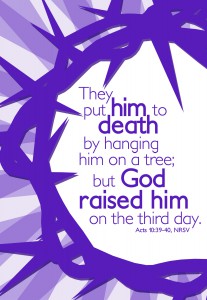 As deep as some of the racial divisions have been in our country, the gulf between Jews and Gentiles in the first century likely ran deeper. Acts 10 describes God breaking down those walls of division.

Be thankful that God does not show favoritism. The separation between Jews and Gentiles was not only ethnic. Although it may have included an element or racial pride, a conviction that Israel was God’s favorite people, it had its origins in the fact that God had chosen his people to be separate from the world around them. The ceremonial regulations, perhaps especially those dealing with diet, kept Israel distinct from their pagan neighbors. The door to the Gentiles coming to Christ had been cracked open with the Samaritans, sort of a half-way people, believing. The Ethiopian had believed and been baptized, but neither had much contact with the Greco-Roman world. Now, through a Roman centurion, a God-fearer, God pushes the door wide open. He prepares Cornelius by sending an angel in a vision, telling him to send for Peter in Joppa. And he prepared Peter, with the vision of the animals and the command to eat. Peter realizes that this repeated vision is about more than food, as that was an important part of the barrier between Jews and Gentiles. Peter had to overcome the feeling that, as an Israelite, he was a favorite of God. But sin is a great equalizer. We all deserve his wrath. Now God graciously reaches across the barriers and calls the nations to himself.

Covenant fellowship has been opened to people from every nation. When God opens the door, he calls his people to enter fellowship with him. That starts with fear, not just terror, but deep-seated reverence, reverence that leads to trust in the Messiah and a life of righteousness. What was expected of Cornelius and his household as they entered the kingdom of God is the same kind of obedient fellowship which God expected of Abraham, Genesis 18:18-19. As those enjoying that covenant relationship with God, you need to reach beyond your comfort zone. “The gospel speaks with power in every culture, to every people under heaven. When the gospel touches a new culture, it does not leave the culture unchanged. Yet God does not demand that people leave their culture in order to hear of his grace in Christ. We who have experienced this grace are the ones who must climb the wall, build the bridges, and suffer the stresses of culture shock. People who know Jesus must pay the price to pierce the barriers between peoples. And as they do, Jesus spread his salvation to the ends of the earth.” (Dennis E. Johnson, The Message of Acts in the History of Redemption, p. 137).

There is only one way into that covenant fellowship with God. Believe and receive the forgiveness of sins. Trust in God’s Anointed! Peter points Cornelius and you to the same Word that brought salvation to Israel—the good news of peace between a holy God and sinful man. God had anointed Jesus with the Spirit for his work of earthly ministry—he went about doing good. Now that same Spirit is poured out on Cornelius and those gathered in his house, paralleling the gift on the day of Pentecost. Luke is summoning you to believe in that name.

Receive forgiveness through Christ’s death and resurrection. The prophets gave witness to the message Peter proclaimed. That included the universality of the kingdom of the Messiah: Genesis 12:2,3; Exodus 19:5-6; Psalm 65:2; Isaiah 11:10 (a banner to the Gentiles); Isaiah 51:4 (JHWH’s justice a light to the nations); Jonash; Amos 9:11-12 (nations that bear my name). The breadth of God’s saving grace is matched only by its depth—the full forgiveness of sin. “Evangelism must lead with the gospel, not with a call to cultural conformity or moral reformation. Repentance is not adopting the evangelists clothing style, speech patterns, or taste in music. It is seeing the horror of one’s sin and receiving the forgiving grace of Christ, embracing the Savior in faith for washing from sin’s guilt and liberation from its tyrannical control.” (Dennis E. Johnson, The Message of Acts in the History of Redemption, p. 136). We are so used to this that we take it for granted. But the reason that you can come to God is because of the truth of Peter’s message.

Trust God’s Anointed One and receive the forgiveness of sins. Enjoy covenant fellowship with God because God, instead of showing favoritism, extends grace to you.