For They Were Afraid 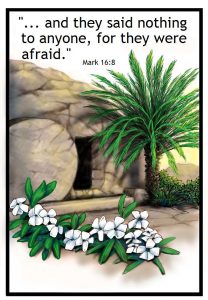 How do you respond to the news that the tomb is empty, that Jesus has risen? With joy? Why does Mark 16:1-8 emphasize fear? Do rejoice! But even so, don’t forget the element of fear he describes.

God reassures you that Jesus of Nazareth has risen! The tomb stands empty. The women were followers of Christ, who now were completing the burial process. They had witnessed Christ’s death and burial, Mark 15:40-47. Now, after the Sabbath, they had purchased spices and early Sunday, had come to anoint him. Their coming shows that they had forgotten Christ’s promised resurrection. As these first witnesses approach, they find the heavy stone rolled back and on entering the carved out tomb, see a young man dressed in white.

God’s messenger proclaims the good news. You need more than the bare fact of the empty tomb. You need to know why it is empty, what has happened, what it means. None of the Gospel accounts attempt to describe the resurrection itself. We go from the burial to the news that the tomb is empty and the Lord has been raised. The event is so stupendous that our words cannot wrap themselves around the details. The Gospels not only describe the acts that God performed in order to accomplish your salvation, they also provide God’s explanation of what those events mean. And God provides the explanation through “a young man,” not just a passerby, but one whose appearance and white clothing cause amazement, distressed fear. Like a number of Old Testament angelic visitants, he appears in the form of a young man. He speaks with authority, representing the Savior who is no longer in the tomb. And he begins with a reassurance that they are not to be amazed. The message of the resurrection requires action on your part. The women are commanded to go and convey the news of the resurrection to the disciples, along with the reminder that he had promised to precede them to Galilee, see Mark 14:28. Even though fear kept the women from initially obeying, v.8, they had a task to carry out. And the message to the disciples implied instruction to go to Galilee. The good news of the resurrection summons you to lay aside doubt and hesitation, and then to direct your daily life in relation to the living Lord. How do you, as part of the church which the risen Lord was to direct to carry out the Great Commission, how do you serve as a witness? How visible to co-workers, to fellow students, is it that you belong to the risen Savior?

“And Peter” means that this good news is for you. Peter needs to know that this message is for him. Mark’s last mention of Peter is his weeping after betraying his Lord at the end of Mark 14. The last time Peter had heard anything about going to Galilee was when he had been boldly assuring Christ that he would never deny him. The inclusion of his name reassures him of restoration and continued service. Mark may well have heard Peter, as he preached, emphasize the message of the angel to the women, tell the disciples and Peter, hearing in it the grace of Christ forgiving his frightened, but repentant follower. “Tell Peter, for it will be good news to him, more welcome to him than to any of them; for he is in sorrow for sin, and no tidings can be more welcome to true penitents than to hear of the resurrection of Christ, because he rose again for their justification.” (Matthew Henry, Commentary on the Bible, at Mark 16:7).

The good news of the resurrection is for you. The resurrection is good news for you as you repent of sin. Believers sometimes go through times of doubt and questioning, particularly after being confronted with failure and sin. David prays in Psalm 51, “Don’t take your Spirit from me.” David in Psalm 51 and Peter in our passage are included in Scripture, in part to reassure you that Christ’s death and resurrection are for you also, as you repent and turn from him. He was crucified for your sins and has been raised for your justification. Your baptism reassures you that you are united with Christ in his death, burial, and resurrection. The resurrection is a call to place your trust in Christ—and to continue to do so each day. But your life may not be at a crisis point of doubt or repentance. Perhaps it is the daily grind of life that has you wondering (at least feeling like) there is nothing more than the routine of your work. A young mother wrote on the wall of her Facebook, “If I see one more dirty diaper today, I think I’ll scream.” Perhaps you can relate. Perhaps you’re a teacher midway through the second semester, and feeling like you’re just going through the motions. Perhaps you are a student, overwhelmed at the material you still have to learn this year. You may be discouraged with the details of medical care for you or a loved one that seem to consume almost every moment of your day. The message that Jesus is not in the tomb, but that he is going ahead of his disciples, that he has work for you, is addressed to you just as much, just as personally, as it was to Peter. Psalm 16 is David’s expression of trust as he goes through seemingly overwhelming challenges. But, though the Old Testament saints did not have as clear an understanding of the resurrection as we do, David knows that God will not abandon him, even in the grave. And he speaks in language that anticipates the Lord’s faithfulness, not just to his people in general, but specifically to his Son, the Messiah, see Acts 2:24-32.

Hear the good news with fear. This Gospel ends abruptly on a note of fear. Mark’s Gospel likely ends with v. 8 of this chapter. The best manuscripts don’t have the remainder, and some of those that do have the last verses set off by marks. There are differences of style, etc., that make those verses appear to be a later summary that got appended. Some have suggested that the ending is so abrupt that Mark was interrupted or that a final column of his scroll was damaged and destroyed. But more likely, Mark, who writes tightly, who introduces his Gospel tersely (Mark 1:1) intended to end this way. Ending with the reference to fear is unusual, but not unheard of. And fear characterizes the reaction to the display of the authority of Christ in Mark’s Gospel. To be confronted with God’s direct intervention leaves you without normal categories for reaction. The initial response is one of fear and terror. Do you know God’s character well enough to fear him? “Astonishment and fear qualify the events of the life of Jesus. The account of the empty tomb is soul-shaking, and to convey this impression Mark describes in the most meaningful language the utter amazement and overwhelming feeling of the women. . . . he wished to say that ‘the gospel of Jesus the Messiah’ (Ch. 1:1) is an event beyond human comprehension and therefore awesome and frightening.” (William L. Lane, The Gospel According to Mark, p. 592).

Serve God in reverential awe. Mark is not the only Gospel that doesn’t give us all the details we might like to have. Mark’s hearers would have known that the terror of the women was not permanently paralyzing. As it modulated into reverential awe, the women carried out their task. The disciples, including Peter, met the Lord in Galilee and elsewhere, and took up the work he had given them to do. It took a while to sink in, but the disciples and the women began to live in the light of the resurrection. The resurrection impacts how you go about your daily work. It gives meaning and substance to it. No chapter of Scripture is packed more full of details about Christ’s resurrection and return and how it implies our own resurrection than 1 Corinthians 15. But look at the note on which it ends: 1 Cor. 15:58. The work to which you return this week is tied, as you look back, to Christ’s resurrection. And, as you look forward, it is tied into the glorious transformation as Christ re-shapes you in the last day.

What comfort will you take from the good news of the resurrection? How do you respond to the words of the young man in the white garment?