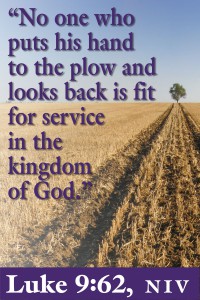 Where does following Jesus fit in your priorities?  You can appreciate the enthusiasm of the man who, in Luke 9:57, comes to Jesus and says, “I will follow you wherever you go.”  Yet Jesus’ response, “Foxes have holes and birds of the air have nests, but the Son of Man has nowhere to lay his head,” seems both less than encouraging and somewhat paradoxical.  It is less than encouraging in that, while you might expect Jesus simply to welcome a new follower, instead, the Lord speaks of hardship and deprivation.  Jesus’ response is paradoxical.  He calls himself “the Son of Man,” a title replete with the majesty and glory of Daniel 7:13,14, yet the birds and wild animals have more of a home than he does.
Jesus then challenges another to follow him (Luke 9:59), but the man begs off with the excuse that he has to bury his father.  Don’t assume that Jesus is heard-heartedly pulling a man away from his father’s funeral.  The father is likely still living, and the expression refers to caring for him until his death.  It is the question that many Middle Easterners considering emigration wrestle with: who will bury my parents?
The third person who encounters Jesus in this passage (Luke 9:61) expresses his desire to follow Jesus, but immediately adds a qualification.  He wants to go home and say farewell to his parents first.  In the Middle East even a grown son submits his plans to his father for his approval and blessing.  The son here may be making an excuse, knowing that his sensible parents will never approve of a hair-brained idea that involves leaving his occupation and following Jesus.
Following suggests travel, and indeed, Jesus is on a journey.  Luke 9:51 begins the great “Journey” section of Luke’s Gospel, “When the days drew near for him to be taken up, he set his face to go to Jerusalem.”  Although Luke summarizes Jesus’ teaching and describes Jesus working miracles, he never loses sight of the end of the journey: the suffering, death, resurrection, and ascension of Jesus.  Because this is going to happen at Jerusalem, a Samaritan village refuses hospitality to Jesus and his disciples.  James and John, who a short time earlier had witnessed the glory of Jesus revealed in his transfiguration, are ready, Elijah-like, to call down the fire of judgment.  Behind Jesus’ rebuke of them lies his consciousness of the stage at which his kingdom is at this point.  The time of final judgment is yet future.  Now he must suffer and die.  And it is on that journey to suffering that he calls you to follow him.  Ned B. Stonehouse reflects on the focus of this part of Luke’s Gospel: “In this extensive middle section one rarely loses sight of Jerusalem as the final destination, where Jesus’ decease was about to be ‘accomplished.’  The section begins with the solemn declaration that Jesus ‘set His face’ that is, reached the fixed determination, to go to Jerusalem when the days were well-nigh that He should be received up.” (The Witness of Luke to Christ, pp. 115, 116. © 1944).
Jesus confronts each of the three potential followers with his claims as Messiah.  The first needed to count the cost of following Jesus on a path that lead not just to homelessness, but to suffering and death.  The second is instructed to leave the dead to bury their own dead (probably a reference to spiritual death).  The third is warned that looking back, anything less than whole-hearted commitment, makes him unfit for the kingdom.  In a culture that honored parents, Jesus claims absolute commitment, exceeding even the respect properly afforded family members.  One minister with Middle Eastern experience recalls students turning pale when the sweeping claim of Jesus in this passage was explained to them.  Their reaction may well be closer than ours to the impact of these words on Jesus’s first hearers.
Luke’s record of Jesus’ call to follow him challenges you to examine the depth of your relationship with him.  Are you committed to him regardless of the impact on your finances or your comfort?  Is he more important than family or other commitments?  Having put your hand to the plow, are you willing to give your Lord the sustained focus he requires?