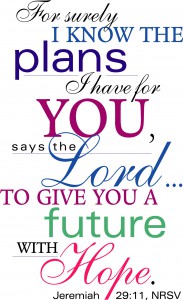 What does faith look like when you find it hard to sense that God is there? What happens to faith when your job suddenly (or gradually) disappears? Where is faith when a loved one dies? Hebrews assures you that you can trust God in these most difficult of circumstances as in Hebrews 11:4-6 he begins to point you to those who have walked by faith.

Believe that God exists. Focus your faith on the living and true God. Hebrews 11 is an expansion of Hebrews 10:38,39. The examples given are practical ones. Although you need to have faith, faith is not first of all about you (despite talk about “my personal belief system” or “my faith structure”). Faith involves looking away from yourself to the God who is utterly faithful. Hebrews is not arguing for the existence of a god, as some apologists do, but rather summoning you to trust in the one living and true God.

Know that your God rewards those who seek him. Not only does God exist, he is the God who rewards those who seek him. He is a personal God, whom you get to know, to trust, and to serve. He’s not just there to make you feel good. A few years ago the National Study of Youth and Religion interviewed more than 3,000 teenagers in our country, and come to the conclusion that while many of them called themselves Christian, they were indifferent and inarticulate about their faith. The study warns of their being “fake Christians.” Many teenagers thought that God simply wanted them to feel good and do good — what the study’s researchers called “moralistic therapeutic deism.” Unfortunately, these teenagers have been given a god to make them feel good, rather than being given the knowledge of the living and true God. (By the way, the study lays the responsibility for this, not on the teenagers, but on their parents and pastors, who too often have been more interested in superficial conformity than in wrestling with their children about spiritual reality.) In contrast, Hebrews confronts you with a God who is real, one to whom you can be committed, one for whom you can and should be willing to sacrifice. What does Hebrews mean when he tells you that this God rewards those who seek him? He is not promising to fill your wish list. Rather, he is assuring you that he will reward you with something far better—union and communion with the living God. “Has it never dawned upon us that God is valuable for His own sake, that just as personal communion is the highest thing that we know on earth, so personal communion with God is the sublimest height of all? If we value God for His own sake, then the loss of other things will draw us all the closer to Him; we shall then have recourse to Him in time of trouble as to the shadow of a great rock in a weary land.” (J. Gresham Machen, What Is Faith?, p.74). How do you get to know this God? See him as he reveals himself in the world around you and in your own heart and conscience. But above all, know him as he reveals himself in his Word. Make use of the means of grace. Read the Word. Study it together. Encourage one another in your Christian walk. Make use of the sacraments. Rejoice in knowing that you have found what is true. You have found the God who is truth himself.

Seek God earnestly. Turn your heart and life to God. Faith includes entrusting yourself to this God to deliver you from judgement. Hebrews 10:37-39 speaks of God coming in judgment, but delivering the righteous one who lives by faith (the community among whom Hebrews counts his readers, the community in which you stand). By faith Abel, though he died, was commended as righteous, v. 4. Seek God. Hebrews borrows the language of the letter Jeremiah wrote to exiles who had experienced the unthinkable–God’s people had been utterly defeated and led into captivity. Jeremiah’s letter is not a call to guerrilla warfare or subversion of the Babylonian empire (as wicked and cruel as it was). Rather they were to settle in their land of exile and seek its peace–for this was what God had warned would happen to them for a time if they persisted in rebellion. But above all, they were to seek God. The people of Israel were learning the hard way that God exists, that he is not to be trifled with, that ignoring him brings judgment. But the good news, the gospel, that Jeremiah communicates, is that if you seek the Lord, he will be found by you. He will bring you back. Your return is not from exile in a foreign land, but redemption from the blindness and slavery of sin as you trust in Jesus Christ. “If a true knowledge of God dwells in our hearts it will inevitably follow that we are brought to reverence and fear. God is not known apart from His majesty. From this comes the desire to worship Him and from this it comes about that the whole life is directed towards Him as towards its goal. . . . Scripture lays down that the right way to seek God is that a man, prostrate, smitten with the accusation of eternal death, and despairing of himself, should fly to Christ as the only refuge for salvation.” (John Calvin on Hebrews 11:6).

By faith walk with God. The call to seek God follows the example of Enoch. He is described in Genesis 5 with an unusual term, “he walked with God.” His was a fellowship so close that he escaped what is said about the others in that genealogy, “then he died.” By faith you may experience wonderful deliverances, as Enoch did, as Noah did in escaping the flood. But don’t equate faith with simple resolution of your problems. The first person on the list, Abel displayed the righteousness of faith–and died at the hands of his brother. Towards the end of the chapter Hebrews tells of saints who endured great suffering, even martyrdom, by faith. At the heart of faith is looking away from yourself to God. But as you do that, you then walk by faith, doing what God calls you to do. One of the great solas of the Reformation is faith alone. But the faith, by which alone you are saved, is never alone. It is always an active faith. Faith is, as Luther once said, a busy little thing. Faith means trusting God–and then doing what he says. It meant living as a stranger in the land for Abraham, and later for Israel in Babylon. Faith means you live in this world, but not as one belonging to it. Your commitment is to your Lord. Because you are connected with him by faith you know that he is with you, never abandoning you, whether life is moving smoothly or you are walking in difficult and even dark paths.

Faith is being sure of what you hope for. There can be a hope of the imagination, which is superficial. But your hope, joined by faith, goes right to the promises of God. That’s something to hold onto, even in the most challenging of times.