Establish the Work of Our Hands 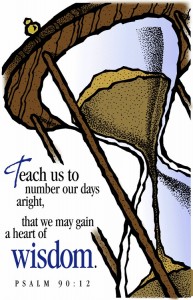 My first New Year’s Eve in the home of my future in-laws, my wife’s father read Psalm 90 just before midnight. While appropriate any time, it is especially fitting at we look at the end of one year and the beginning of another.

Count your days. Learn to number your days. Life is brief. The title identifies the author as Moses. Think of him leading Israel through the wilderness. Israel had experience magnificent displays of the redeeming power of God, first in the Exodus, then in the theophany at Mr. Sinai. But they had turned in rebellion and hard-hearted unbelief, refusing to enter the promised land. Now they were wandering in the wilderness for 40 years, and wandering while a generation died, after which they could enter the promised land. 1 Corinthians 15 is realistic about death, decay, and destruction. The Psalm talks about death, vv. 3, 5, 9, 10. The 70 or 80 years of v. 10 likely contrast intentionally with the great ages of the pre-flood patriarchs. Life is brief, and often painful—and Psalm 90 wrestles honestly with that. Count your days, and count them properly. We count all kinds of things, the rise or fall of the stock market, the percentage of unemployed people, the win-loss ratio of the Blazers. How much attention do you pay to what is really important? Do you understand the brevity of life? Do you act as though life is going on forever? More importantly, do you understand why life is brief? Do you realize the impact that the sin of Adam has had on you? Do you understand that your sin bars you from fellowship with God for eternity—unless you turn to Christ in faith?

“Even he who is most skillful in arithmetic, and who can precisely and accurately understand and investigate millions of millions, is nevertheless unable to count fourscore years in his own life. It is surely a monstrous thing that men can measure all distances without themselves, that they know how many feet the moon is distant from the center of the earth, what space there is between the different planets; and, in short, that they can measure all the dimensions both of heaven and earth; while yet they cannot number threescore and ten years in their own case. It is therefore evident that Moses had good reason to beseech God for ability to perform what requires a wisdom which is very rare among mankind. The last clause of the verse is also worthy of special notice. By it he teaches us that we then truly apply our hearts to wisdom when we comprehend the shortness of human life. What can be a greater proof of madness than to ramble about without proposing to one’s self any end? True believers alone, who know the difference between this transitory state and a blessed eternity, for which they were created, know what ought to be the aim of their life. No man then can regulate his life with a settled mind, but he who, knowing the end of it, that is to say death itself, is led to consider the great purpose of man’s existence in this world, that he may aspire after the prize of the heavenly calling.” (John Calvin on Psalm 90:12).

Wisdom flows from the Lord’s favor. Focusing only on the brevity of life can lead to a culture of death. We live in a culture that is sometimes schizophrenic about life and death. In the same hospital there may be people working tirelessly to save the life of a tiny, premature infant–and in the same facility the lives of children at that age of development are being terminated, sometimes because they are inconvenient to the parents. At the other end of the age spectrum, we not only have vigorous efforts to treat disease and to prolong life (usually very worth goals), but also experimentation and speculation about much more drastic efforts, procedures which raise their own set of ethical questions. Can I be frozen at death to be thawed and revived when a cure for cancer is discovered? Can I clone myself to provide a supply of transplant tissue? And that is combined with the idea that when I want to end my life, I can–and I can ask my physician to provide me with a fatal medication. The euthanasia movement is trying to gain momentum. I can’t help wondering if our preoccupation with death in our culture is God’s judgment on us for treating life as something that is simply our choice, rather than being seen as given by him and related to him. Psalm 90 and 2 Peter have in common the certainty of coming judgment. Don’t take delay on God’s part as an indication that he is ignoring sin.

Positively, God’s love is unfailing. Understand who God is. Appreciate his eternity, his self-existence, his being the Creator. Notice how Psalm 90 contrasts God’s character with the brevity of our own lives. Appreciate the holiness and transcendence of God. As you understand the character of God it can give you a quiet trust that he will have compassion on you. His presence is there as you walk through the valley of death–or accompany a loved one as far as you can on that journey. His presence gives you hope as you deal with disappointment, with a struggle to keep your head above water. Rest in the assurance that this eternal God has called you to enter his dwelling place. The way into that glory comes only in the Lord Jesus Christ.

Work in confidence. As a pilgrim people, pray for permanence. Even though this Psalm was sung by Israelites who were enduring God’s punishment for their sins, it does not leave you in the despair of an endless tramping through the desert. The Psalmist prays with confidence for God’s compassion to bring joy instead of sorrow. He expects the next generation to witness the splendor of God’s majestic deeds, v. 16. Don’t be deceived by the philosophy of death that permeates our culture. It is ultimately self-defeating, because it has cut itself off from the living and true God. You know that the favor of God rests on you in the person of his Son. And you have an even greater confidence than was available to Moses that God will establish the work of your hands. God has brought salvation out of judgment in the person of his Son. Judgment is coming, but because Christ has borne the wrath of God in your place, you face life–and death–with confidence. “God who is great in justice when he chastens will not be little in mercy when he blesses, he will be great all through: let us appeal to him with unstaggering faith.” (C. S. Spurgeon, Treasury of David, on Psalm 90:16).

In the light of the resurrection, know that your work in the Lord is not in vain. The heart of Paul’s gospel is that Christ died, was buried, and was raised. This is the core of the good news, but it is not a minimalist gospel—according to the Scriptures brings in the entire sweep of God’s revelation. The suffering and death of Christ are essential to the glory of the resurrection. Yet, even in the contrasts, there is continuity. We are raised, but we are also changed. Notice the glorious, yet practical conclusion Paul draws. Your labor, what you are doing this week, is not in vain in the Lord. If the glory of the kings will be brought into the New Jerusalem, how much more the work that you do to his glory. Neither Moses nor Paul allow you to divide life up into parts that are done for the Lord and “the rest of life.” Rather, for Moses, it is the work of you hands that has permanence and meaning. And for Paul, it is because of the work of the second Adam that the work that we do, as sons and daughters of Adam and Eve, is not in vain. His resurrection not only transforms your mortal bodies in the last day, but it also gives eternal meaning to the work you do this week.

What is worth counting? Your days, but only as you see them in their relationship to God.