Don’t Add or Take Away! 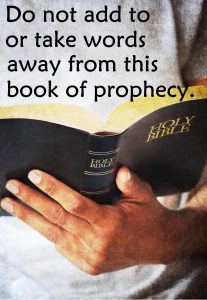 In 1982 the Reader’s Digest published a condensed Bible, with Old Testament books shortened by about 50% and New Testament books by about 25%. Excluded from the version was Revelation 22:18–19, which a spokesman for the magazine described as sort of an ancient copyright indication. The text is far more than that, however!

Beware of tampering! This warning is for you. Some have suggested that the text was a warning to scribes copying the document to take care. If it were, would any scribe have dared to make a copy?! Rather, the warning is addressed to those who hear the words of this prophecy. It draws on the blessing of Revelation 1:3. The warning addressed the original hearers and readers of the book. As John wrote, inspired by the Holy Spirit, the warning extends from the first century down through the ages. While the warning is part of the Book of Revelation, it applies to all of Scripture. “[T]he warnings in 22:18–19 are directed not primarily to those outside the church but to all in the covenant community, as the warnings of Deuteronomy were addressed to all Israelites. Those who do not heed the warnings profess to be Christian, but their allegiance to other gods betrays their confession.” (G. K. Beale, The Book of Revelation, p. 1152).

Do not add to God’s Word. The warning is ironic. Add to the words of this prophecy, and the plagues of this book will be added to you. We don’t know exactly what additions might have been attempted in John’s day—the warning seems to have had its effect. Perhaps he had in mind those who claimed to be apostles, Rev. 2:2, or Jezebel in 2:20. But down through the years there have been additions attempted. Cults may claim adherence to the Bible, but supplement (in practice replace) it with the writings of their leaders. Replacing the unique authority of the Word of God with the tradition of the church has a similar impact. And well-meaning Christians can compromise the unique authority of God’s Word by looking to a feeling or sense of peace, and claiming, “God told me….” Thankfully, many who do that are steeped will enough in Scripture that their impressions are actually guided by the Word. But avoid any attempt at ongoing revelation.

Do not take away from God’s Word. When sinful mankind finds God’s Word disagreeable, he wants to delete it. Jeremiah 36 describes King Jehoiakim burning Jeremiah’s scroll of warning, section by section. Revelation contains warning—and warnings were likely no less popular in the first century church than they are today. There was a temptation to ignore them in practice, if not actually to delete them from the book. Not long after John wrote, around 144 Marcion was rejecting the Old Testament and parts of the New. Inadvertently he motivated the church to clarity in recognizing which books composed the Bible. Too large a group of those who call themselves Christians treat the Bible as something less than God’s Word. Perhaps they do not deny it outright, but they treat it as any ordinary human book. Just as the seven churches faced pressure to ignore parts of God’s Word in order to survive in a hostile, pagan environment, God’s people today find that it takes courage to maintain positions that are clearly biblical, but are politically incorrect. It becomes easy to ignore in practice the parts of the Word that we find challenging. The ironically appropriate judgment is to have one’s share in the tree of life and the holy city removed. You cannot pick and choose what parts of God’s Word you want.

Hear the words of the prophecy of this Book. The Bible is God’s revelation. You need to listen to the Bible as God’s Word, without adding or subtracting, because it is God speaking. Biblical Christianity is uniquely a revealed religion. Not only does God reveal himself in creation, but he also speaks. He spoke to Adam and Eve in the Garden. He continues to speak. You read that speaking in the Bible. “The religion of the Bible thus announces itself, not as product of man’s search after God, if haply they may feel after Him and find Him, but as the creation in men of the gracious God, forming a people for Himself, that they may show forth His praise. In other words, the religion of the Bible. . . announces itself as the revealed religion, as the only revealed religion; and sets itself as such over against all other religions, which are represented as all products, in a sense in which it is not, of the art and device of man.” (B. B. Warfield, “The Biblical Idea of Revelation,” in The Inspiration and Authority of the Bible, p. 72). John is clearly aware that what he is writing is authoritative.

Pay attention to this prophecy. This warning in Revelation 22:18–19 is likely spoken, not by John, but by Jesus himself—look at v. 20 and also the earlier context. Remember the command, “he who has an ear, let him hear,” repeated to each of the seven churches. If the Bible is what it claims to be, God’s Word, it is authoritative. It is infallible. It is without error. It is what you need, not only as a guide to worship, but as your authority in every area of your life. “Oh, my friends, how precious it is that in this world of sin with its vagaries of unbelief, its fluctuating philosophies, its dim light which is darkness, and its wisdom which is foolishness with God, its bewilderment and despair, we have a sure word of prophecy, whereunto we do well to take heed, as unto a light that shineth in a dark place until the day dawn and the day-star arise in our hearts! How precious that we have a word divine, infallible and sufficient for the individual, for the family, for the church, for society, for the commonwealth and even for the world!” (“The Inspiration of the Scripture,” Collected Writings of John Murray, Vol. 4, p. 57). How are you making use of that Word? Do you read it? Children, are you developing the good habit of reading it each day? Fathers and mothers, are you reading it together? To your children? Are you memorizing it?

As you hear, come to Jesus! How you read the Bible is important. It is not just a collection of rules. Nor is it full of moralistic stories. It’s not a treasury of inspirational sayings to motivate you to have a good day. Rather, it has a theme. Particularly as you read the Book of Revelation remember that. Don’t get so caught up in the details, in trying to figure out strange symbolism (much less any attempt to set dates!) that you miss the heart of the Book. It is the revelation of Jesus Christ. Not only is he the author who speaks to John, both directly and through angels and visions, but it is the revelation about him. Revelation, like all of Scripture, is given to show you Jesus. As we will see next week, Jesus invites you to come to him. He reveals himself in his terrible majesty as the glorified Lord and the coming Judge. But he also reveals himself as the Lamb that was slain—in order to redeem his bride, the church, and to present it spotless.

Brothers and sisters, treat the Book of Revelation and all the rest of the Bible as what it truly is—words breathed out by God. You dare not supplement it, nor may you subtract from it. You must not ignore it. Read it, meditate on it, memorize it, but above all, respond to its call for you to come to Jesus.