Do You Know God? 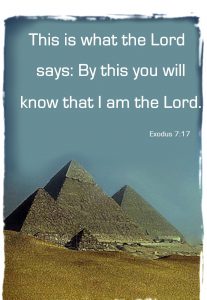 Recognize your Lord as judge. The Lord judges rebels who harden their hearts. The Lord has Moses and Aaron perform a preliminary sign for Pharaoh, throwing down the staff, and it becomes a snake. This is a different term than used when God had Moses throw down his staff in the wilderness: although it has a broader range of meaning, it may well mean snake here. The Egyptian magicians are able to imitate this miracle, but then Aaron’s staff swallowed up the others. The Lord is indicating that he is sovereign. Pharaoh, however, refuses to listen. He hardens his heart—and the Lord hardens it to display his power as the judge of the earth. Turning the water of the Nile to blood is the first of a series of nine plagues, to escalate to the final tenth plague that judges Egypt and releases God’s people. The Nile was critical to Egypt. Moses and Aaron confront Pharaoh near the river, and its water turns to blood. Efforts to explain away this and the following miracles as coincidental natural events simply don’t fit the Biblical evidence. As even Pharaoh’s servants will later come to admit, this is the hand of God. But the miracle is more than evidence to Pharaoh and judgment against him.

The Lord judges false gods. This is not just a contest between Moses and Pharaoh, or even between Israel and Egypt. The Lord, the God of Israel, is in contest with the false gods of Egypt. The Nile, the lifeblood of Egypt, was worshiped as divine. The Lord is the one living and true God. God is making clear what he will proclaim at Sinai in the First Commandment. He assures his people as he assures you that he is truly God. That gives you reason to hope in a world that tries to dismiss him as irrelevant or stands in firm opposition to him. “To whom are you looking to provide for your needs? While you may have never heard of these Egyptian river gods, people are still tempted to trust in other things to provide for them, instead of God alone. Many place their final hope in the stock market, economic growth, a new president, or something else. All these will pass away.” (Tony Merida, Exalting Jesus in Exodus, p. 57).

Know your God as your powerful Redeemer. Thank God that he uses his power to deliver you. There is a judgment side to this and the other plagues—but at the same time each of them is part of the deliverance God is providing for his people. Although Pharaoh’s heart is hard, though he still refuses to release Israel, the Lord is beginning to give hope to his people. The God who is powerful enough to turn the Nile to blood, who can prove himself stronger than this god of their enemies, this God is set on delivering them. As you look at what this and the rest of the Exodus events point to, don’t forget that a crucial part of Christ work is his exercise of his power over sin and Satan. He not only forgives you, he delivers you from the power of the enemy.

Respond with obedience. No longer does Moses argue with God. Repeatedly we read that he and Aaron did what the Lord commanded. Moses and Aaron are learning that God expects his people to obey him. Our obedience is never the ground or basis for our salvation, but it is one of the purposes God has in delivering us.

Enjoy fellowship with God. Not only does God want his people to obey him, he wants them to have fellowship with him. He has identified Israel as his firstborn son. There is a familial relationship. God wanted Israel to worship him, but beyond that, to go from slavery in Egypt into the promised land, where he would pick a place to live among his people. You know how imperfectly that worked out for Israel. But you have a Redeemer better than Moses. You have not just an anticipation, but the reality of God dwelling among his people.

The power of God has been displayed in Christ so that you, united to him by faith, can live in fellowship with him now and anticipate the fullness of that when his judgment is displayed at the last day. He wants you to know him in the sense of deep love and fellowship.