Dear Children, Keep Yourselves from Idols 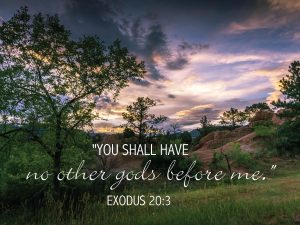 Israel, freshly out of polytheistic Egypt, needed the First Commandment (Exodus 20:3). But do we? Are you in danger of being an idolater?

Worship no other gods. Other gods do compete for your allegiance. Other gods are worshiped before (“besides” or “in opposition to”) the true God, although these gods are false, Isaiah 44:14-20. Idol worship, as attractive as it may seem, is foolishness, because there is only one true God.

“We can, of course, ask a question about who God is, but Scripture often firsts answers the question, how many gods are there? The most basic creed of the Old Testament is the cry, ‘Hear, O Israel: the Lord our God, the Lord is one’ (Deut. 6:4). We need to remind ourselves of this because there are many things that that are wrongly valued as gods (1 Cor. 8:4-6), while the truth is that there is only one God who is both ‘living’ and ‘true’, as Jeremiah told the Israelites and Paul told the Thessalonians (Jer. 10:10; 1 Thess. 1:9).

“But while God is limited in number, he is unlimited in his being and in all his perfections. Job and his friends were wrong about many things, but at least all of them understood that the depths of the divine Being cannot be sounded by any mere man; we we can hardly even grasp ‘the outer fringes of his works’ (Job 26:14; cf. Job 11:7-9).” (Chad Van Dixhoorn, Confessing the Faith, p. 30).

As Christians, expose the folly of our culture’s idolatry. Isaiah points out the incomparable character of the true God, but then goes on to show how foolish idolatry is. There are blatant idols. The Egyptians, whose land the Israelites had just left, worshiped the divine Nile River, the sun, and numerous other gods. The land of Canaan, which they were about to enter, was saturated with gods and goddesses who were seen as the source of fruitfulness and blessing. Your God provides the ultimate framework for understanding reality. Idols come and go. They tend to be replaced by newer and better models! The gods of a conquering nation were not only imposed on subject peoples, but they often voluntarily began worshiping whatever god was great enough to empower their conquerors. In our culture the idols of humanism and materialism have proved less than satisfying. They are being replaced by a belief in magic, worship of nature, and a new age pantheism–everything, including yourself is god. You can become an idol. This was the basic sin of Eve, placing herself on the throne. Herbert Schlossberg in Idols for Destruction calls Eve “the first humanist.” Whatever is most important to you is your god. To the degree that you let, even good things, become all important in your life, you are an idolater.

Worship none of these gods. Don’t bow to obvious idols. This may not seem like a strong temptation, but our culture sees increasing fascination with Satanism, witchcraft, magic, and the images of eastern religions. Don’t let the state become a god. Don’t look to it as the solution to every problem. Look deeper than a change in administrations of political power for solutions to our culture’s troubles. Christians, be alert to fulfill the function of the diaconate. At the heart of the physician assisted suicide lies a violation of the First Commandment. It puts man in the place of God in making decisions about the end of life. As a Christian, you need to object to that policy. But a very practical way of making clear that you worship the living and true God, the Lord of life, is to take the time to provide respite care to someone who is near the end of life. Your view of who God is affects how you see yourself and everybody else. Our western humanism tends to have an individualistic autonomous view of self. But eastern thought sees individual personality as an illusion, and thus love is also an illusion. Paul reminds you that the greedy person is an idolater, and that this sin, among others, excludes you from the kingdom, Ephesians 5:5. Our gender identity culture is at heart, a rebellion against God. Lie Israel in Canaan, like first century believers in the seven churches of Revelation, idolatry is not only seductive, it can be a powerful force in the culture, requiring conformity. This form of idolatry is a dissatisfaction with whom I am as God made me, and a belief that I can re-create myself as I wish. How do you respond as a Christian? With compassion for those who are confused. Rather than spew hatred, focus on displaying in your life and in you family what it means to follow the living and true God.

Love God above all else. The First Commandment requires total commitment. The First Commandment is stated in the negative. But obedience requires something positive. Although love is not mentioned explicitly, it is at the heart of keeping this command. A bride and groom promise to love each other exclusively. That is what God expects of you! God expects this love from you because he is the triune God, in which each of the persons, from eternity, focus not on self, but on the other persons of the Trinity. This God created you in his image, not because he had a need to fill, but so that you could share in that love and fellowship. No wonder that the prophets so often described Israel’s idolatry in terms of marital unfaithfulness or even prostitution. This commandment requires loyalty. It is at the place in which ancient treaties demanded commitment. Jesus requires your absolute commitment, Matthew 22:36,37. If he is your Savior, he is also your Lord, now, not just at some future point. This command includes the whole law.It cannot be kept without complete obedience. The First Commandment focuses on worship, but every area of life is in view.

“To have God, is to know and acknowledge that he is God, that he is one, that he is such a one as he has revealed himself in the church, and that he is also such a God to us: then it is to trust in him alone, with the greatest humility and patience—to submit ourselves to him with fear and reverence—to love him and to expect all good things from him alone.” (Ursinus, Commentary on the Heidelberg Catechism, p. 508).

Love God in the Lord Jesus Christ. The First and Second Commandments are related. Although there is a proper distinction, they are close. The sanctions of Exodus 20:5,6 apply to both. God’s rich blessings are promised, and God is jealous for his own worship. On another mountain, roughly a millennium and a half later, God again revealed himself in glory. Again he spoke. And he said, “This is my beloved Son. Listen to him.” The promised blessings are yours only in Christ. The law is a standard or compass. It reveals your direction. If you are really honest, you see yourself as an idolater. Thus you fall under the sanctions of the law. You deserve death. Even many religious people find offensive Jesus’ claim to exclusivity. He said, “I am the way, the truth, and the life.No one comes to the Father, except through me.” That bothers many, but, because Jesus Christ is the one living and true God, incarnate for your salvation, his claim is true. Its rejection is the ultimate idolatry. Only the God-man, Jesus Christ, offered God the perfect loyalty and worship he requires. He is the one Man who truly and perfectly put God first in his every action, word, and thought. Because of his obedience in your place you can enjoy God’s blessing instead of enduring his judgment. God has placed on your account the perfect worship and obedience of his Son, and then on him the guilt and punishment due you for your idolatry.

How does John, the beloved disciple, John who heard the Father’s voice of approbation for his Son on the mountain, how does this John conclude his first epistle? After sounding rounds on the Father’s love to us in his Son, after rejoicing in the redemptive work of Christ, after urging his hearers to love each other, John says, “Beloved children, keep yourselves from idols.” Those words are addressed to me. They are addressed to you.