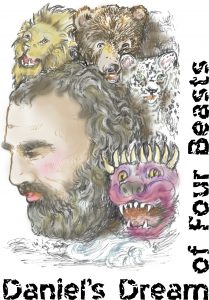 “Beware of bears” is a sign which you do well to heed. The warnings of Revelation 13 about a beast that is a bear-leopard-lion combined with something more horrible, a ten-horned beast, are in the Bible for your instruction.

Beware of the monstrous beasts. The beasts of Revelation 13 incorporate the beasts of Daniel 7. When we read Daniel 7 we often focus (appropriately) on the description of the Son of Man. But Daniel’s vision includes four ferocious animals. Daniel’s four beasts represent the successive empires pictured earlier in the image of Daniel 2, perhaps giving you a hint that you may not be far from the mark when you recognize repeating patterns in Revelation. That background also pushes you in the direction of looking for nations and cultures, not just individual leaders. If the first beast focuses on persecuting power, the second beast, rising from the earth, uses false teaching as well as persecuting pressure to promote the worship of the first beast. “Believers are to beware of compromise, not just with the Roman emperor, but with all the facets of the state in collusion with religious, economic, and social aspects of the idolatrous culture, which all epitomize fallen humanity.” (G. K. Beale, Revelation p. 725).

The beasts parody God. Notice the language John uses to describe the beasts. You have seen 10 horns on the Lamb of Revelation 5. Power, a throne, and great authority echo the language Daniel uses of the Son of Man. The second beast performs signs and wonders, promoting the worship of the first beast. Note the warning Jesus gave in Matthew 24:24. The imitative parody becomes clearer as you notice the fatal wound inflicted on one of the heads of the first beast, see Isaiah 27:1—yet the beast lives. Go back to the curse of Genesis 3:15, but notice also that despite this sword blow, the beast lives. John is not echoing rumors of Nero come back to life, though that may make the imagery appropriate. Rather he is showing how much the beast imitates the Lamb that was slain.

Be on guard. Be prepared for suffering. Satan, and those serving him, whether fallen angels or world empires or cultural forces attack God’s people. Be prepared to suffer for the sake of Christ. John himself was in exile for the Lord’s sake. Some of the seven churches were facing persecution. The history of the kingdom of God is marked by his people suffering. Andrew Brunson is on trial in Turkey right now for his faith, and you can point to other countries as well where Christians are severely persecuted. The pressures on Christians in our own country are increasing. John’s warning of suffering, and even martyrdom, is explicit in Revelation 13:9, 10, quoting Jeremiah 15:2.

Beware of false worship. One method of attack is open persecution. Another is pressure to compromise, not to be the nail that sticks up as politically incorrect. The self-centeredness of our culture tries to lure God’s people away from obedience and trust. “When purported Christian teachers take their primary cues from the surrounding culture instead of from God’s word, they corrupt the covenant community spiritually by encouraging it to live by norms and a faith that ultimately oppose the reign of God and Christ.” (G. K. Beale, Revelation p. 710). The corruption and power of the beast comes to focus in a man. John gives us a number for his name, 666. Some have used gematria (letters representing numbers) to identify Nero or other Roman officials. Speculation about a future appearance of the one opposed to God runs rampant. The term “anti-Christ” is sometimes used, although John does not use the term here. Notice how he does use it in the plural in 1 John 2:18–23. There are many anti-Christs, though there may also be a focus on a future individual, 2 Thessalonians 2:1–12. The number of man, man apart from God, falls short of the perfection of 7. This is humankind in rebellion against God. All this seems discouraging. Is there hope?

Give thanks that your names are written in the Lamb’s book of life. Your name is in the book! Notice who do not worship the beast. Notice who are willing to suffer for that refusal. It is God’s people. If your trust is in Christ, your safety depends, not on your own strength, not even on some last minute adjustment by God, but in the assurance that your name was written in the Lamb’s book of life before the creation of the world. (It is the writing of the name, not the slaying of the Lamb, that took place before the creation of the world, Revelation 17:8.) Even if you suffer, you have the assurance that your name is written in the Lamb’s book. He was slain for you, and he truly lives. Unlike the beast, whose destruction will be described, he reigns and you will reign with him.

So what do you do? Listen! Endure faithfully! Be wise! Picking up a refrain from the letters to the seven churches, listen to God’s Word. Pay attention. Endure faithfully. The Lord is in control, and the dragon and the two beasts cannot move beyond what the Lord allows. Be wise. The encouragement that comes with the name is not a call to clever, innovative interpretations, but rather to understanding. It takes wisdom to sort out the messages from the world that bombard you, and then to chose to walk in the way of the Lord. “Because suffering is the church’s inevitable path to glory, the saints must demonstrate enduring faith. . . . Persistence in the word of our testimony to the Lamb is the means of our victory over the dragon who empowers and authorizes the beast.” (Dennis, E. Johnson, Triumph of the Lamb, p. 194).

Yes, beware the beasts! But take heart, because the Lamb has triumphed over them. He will not erase the names of his people from his book of life.