Believe in the Lord Jesus 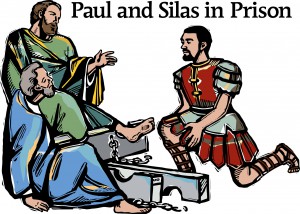 First century Europe was a continent enslaved in the darkness of paganism. In the Macedonian city of Philippi, the power of the good news began to shine. As Luke describes that in Acts 16:11-10, think of the places in your life and in your community where that power needs to come to bear.

Trust your powerful God. Thank God that he opens hearts. The city lacked the ten men minimum to form a synagogue, so Paul and Silas went to the place of prayer on the bank of the river. Dramatic events follow in this chapter, but do not overlook the power of God in opening the heart of Lydia. She and her household were baptized. The good news touched her life, and she opened her home, insisting that the missionary party accept her hospitality. That same power would soon be evident in the conversion of the jailer.

Trust your God who defeats the powers of darkness. A slave girl began to follow the apostles, crying out, “These men are servants of the Most High God, telling you the way to be saved.” She had a spirit of divination (a python spirit, associated with the Greek god, Apollos), and made profit for her masters by fortune telling. Luke may be glancing all the way back to the temptation in the Garden of Eden. Deuteronomy 18 prohibited God’s from turning to sorcery and divination, instead pointing them to coming Prophet, who would be like Moses, but greater. Isaiah 42:8-9 and 46:9-10 identify the Lord as the One who tells the future, in contrast with the ignorance of idols, 41:22-24. The Lord silenced the demon-possessed he encountered when they identified him. Paul was unwilling to accept endorsement from this tainted source, and in the name of Jesus commanded the spirit to leave her. The power of the God expressed in his Word defeats the powers of the evil one. The One who crushed the serpent’s head is at work.

Serving your powerful God, involves suffering. The spirit left the young woman, and the profits of her owner left as well. She had cied that “these men” were “announcing” the way of salvation; her owners accused “these men” of “announcing” practices unlawful for Romans. Paul and Silas were arrested and flogged, then thrown into prison and placed in the stocks. Expect suffering as you serve your Lord in an increasingly rebellious society. Paul’s words on suffering in his letter to this church take on fresh emphasis when you remember the background of this chapter.

Believe in the Lord Jesus Christ. Trust your covenant God who reveals his saving power. Because they know their God, Paul and Silas not only pray, but sing hymns to God, with a captive audience listening! At midnight the Lord displays his power as he had done at Sinai and at Calvary. The earthquake is violent enough that all the security measure of the prison are nullified. Paul interrupts the plan of the jailer to commit suicide, assuring him that the prisoners are all present. His coming to faith is a peak of the powerful working of God in Philippi. “The superiority of the gospel of Christ over pagan divination was shown first in the girl’s announcement of the apostles’ mission: ‘These men are servants of the highest God, who announce to you the way of salvation.’ . . . The gospel’s supremacy is seen also in the exorcism of the spirit from the girl. . . . The climactic demonstration of the gospel’s victory over pagan divination was the vindication of the apostles through their imprisonment, the midnight earthquake, the conversion of the jailor, and the apology of the city magistrates at daybreak.” (Dennis E. Johnson, The Message of Acts in the History of Redemption, p. 177-178).

Believe and be saved! Like him, be aware of your need. Like him, you need to believe on the Lord Jesus. That is not only the first step in the walk of a Christian, it continues to mark every step. Continue to cast yourself on him. He comes to you in the Word, read and preached. He comes to you in the sacraments. He unites you to his body, the church. Paul’s insistence on an apology from the city fathers was not to satisfy his ego, but to provide protection for the church. Paul and Silas eventually go on their way (since Luke writes “they” does he remain in Philippi?), but they leave a church united to Savior, a body of believers who know what it is to believe in Jesus and to walk with him through suffering.

“Believe in the Lord Jesus Christ” is often quoted in the context of evangelism as someone transitions from death in sin to new life in Christ. But remember that this is not just an individual matter—it is a crucial step in the triumph of the Seed of the woman over the serpent. Jesus is Lord! Your trust in him is part of that victory.