Are Your Neighbors Athenian Suburbanites? 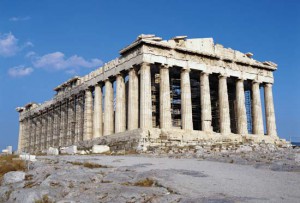 Even in ruins the Parthenon on the Acropolis in Athens is magnificent. Luke, in Acts 17:16-34, describes Paul viewing the city. It seems distant in time as well as geography from the splendor of Oregon’s Cascades and forested hills. Yet, in many ways, you live in a suburb of Athens.

Athens does not appear to have been a planned part of Paul’s itinerary on this second missionary journey. His stay was a respite from persecution in Thessalonica and Berea. Yet he could not simply be a tourist. His proclaiming the gospel summons you to call your neighbors to repent of idolatry. That means you need to recognize what idolatry is. The temple to Athena Parthenos, already 400 years old when Paul saw it, crowned the city full of beautifully carved idols, images of the gods, numbering in the thousands. The golden age of the glory of Greece had passed, but Athens still basked in its remnants. It was renowned not only for its architecture, but also for its philosophy and learning. Athenians considered themselves true aboriginals. Everyone else had a story of where the had come from, but they (they thought) were the original people of that place. Paul preached in the synagogue, but on other days was in the public markets, engaging the people. As he saw the many idols he was “greatly distressed,” the word from which we get paroxysms. The word was used to translate the Lord’s indignation at idolatry, Deuteronomy 9:18; Isaiah 65:3; Hosea 8:5. He preached the good news of Jesus and the resurrection, and perhaps was misunderstood as suggesting that the Athenians add a god named Jesus and a goddess named resurrection (anastasia) to their collection of deities. Epicurean and Stoic philosophers began to engage him, and he was invited to explain himself more fully at a meeting of the Areopagus.

There Paul seized as a point of contact, an altar he had noticed, with the inscription, “To an unknown God. He did not simply take Greek thought and add a bit more to it. Rather, in a gracious way, pointed out their ignorance and proclaimed the one living and true God. “In his address on the Areopagus Paul proclaims the name of the resurrected Christ to the Gentile covenant-breakers, would be fugitives from divine judgment. Paul does not place himself on their level in order with them to investigate the nature of being and knowledge in general, to discover whether the God of Abraham, Isaac, and Jacob might possibly exist. He tells them straight out that what they claim not to know, he knows. He tells them that their so-called ignorance is culpable, for God is near to them as their own selves. He tells them, therefore, to repent of their worship of idols, to turn to the living God, lest they stand without the robes of righteousness before the resurrected Lord Christ on the day of judgment.” (Cornelius Van Til in Jerusalem and Athens, p. 7).

Idolatry is giving to someone or something else the worship that belongs to the living and true God. It is not confined to marble statues. The self-centeredness of our culture affects not only the pagan world around us, but like the head of the camel, enters the tent of the church. If you are going to be an effective witness to your pagan neighbors, be able to recognize their idolatry—and how it threatens your own heart. Notice how, in a different setting, Paul in Romans 1 reminds you that the immorality of the culture is not the main problem—the heart is the false worship of self.

Repent because you are God’s offspring. Although Paul here does not quote the Scriptures the way he did in the synagogues, his thought, and even his language is steeped in the Word. God is the Creator, Genesis 1; Psalm 146:6; Isiah 42.:5. God formed the nations of one man (countering the elitism of the Athenians as well as modern racism) (see Malachi 2:10; Isaiah 42:5). Paul seizes a point of contact and quotes the poet Epimenides. In a deeper sense than that poet understood, in God we live and move and have our being. The Cilician poet Aratus wrote of us being God’s offspring. Don’t think that God is just a glorified man. Precisely because we are God’s creatures, made in his image, we seek him. Their ignorance of God was culpable, and Paul summons them to repentance and fellowship with the true God.

Repent because judgment is coming. Jesus is the judge appointed by God. He is the Man God appointed as judge, Psalm 9:8; 96:13; Daniel 7:13-14. He has fixed the day of judgment, Joel 2:1. Repent! Don’t let anyone tell you that Paul’s comment in 1 Corinthians 2:2 meant that he had changed the message he tried in Athens. The method of approach to the philosophers was different from that in the synagogue, but in both places Paul preached Christ.

Not only did Paul talk about Jesus, he summoned his hearers to repent because God raised Jesus from the dead. The second coming of Christ is an outgrowth of his first. Your resurrection is an extension of his. The resurrection is essential to the gospel message. “The gospel of Jesus Christ, according to Luke, as disclosed in both his Gospel and the Acts, is the gospel of the crucified One. But since the divine action of salvation is viewed as reaching its consummation in the exaltation of Christ, there is a profound occupation with the resurrection of Christ as serving to sum up even more pointedly than the cross the decisive saving work of God.” (N. B. Stonehouse, The Areopagus Address. p. 49).

The reference to the resurrection. Some of his hearers could accept the idea of an immortal soul, but a bodily resurrection was foolishness. Nevertheless, God used the foolishness of preaching to draw Athenians to himself. Even in pagan, sophisticated Athens, God had his people. He has them in Newberg and elsewhere in NW Oregon as well. Spiritually we may be suburbs of Athens, but God uses his Word.

Your responsibility is to recognize the idolatry of your neighbors (as you repent of your own) and to call them to repentance and trust in the One God raised from the dead.