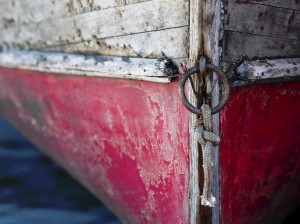 You know that you have a very limited time together with close friends, after which you may never see one another again in the flesh.  How would you spend that time?  Jesus spent part of the 40 days between his resurrection and his ascension teaching his disciples.  With limited time and so much to do, why does Jesus take time to host a picnic breakfast on the beach (John 21:1-14)?  And what, if anything, does this breakfast of bread and fish cooked over a charcoal fire have to do with Mother’s Day?
Jesus doesn’t simply appear.  He reveals or manifests himself to his disciples.  In fact, references to Jesus revealing himself in verses 1 and 14 bracket the account.  In the middle of the passage John acknowledges that it is Jesus who has revealed himself when he calls to the disciples in the boat, and Peter responds by jumping into the water to hurry to his Lord.  Certainly John is calling you to acknowledge and respond to the resurrection of Jesus.
The final chapters of John’s Gospel emphasize, not only the truth of the resurrection, but also the involvement of the risen Lord in the details of our daily lives.  The risen Lord is not above the feel of sand under the toes, the warmth of a charcoal fire, the taste of smoked fish, and the aroma of baking bread.  He blesses the fishing which his followers have been engaged in through the night by instructing them to put the net in on the other side of the boat – – resulting in a huge catch..  S. G. DeGraaf comments in Promise and Deliverance: “The risen Lord has all things in His hands; in the sovereignty of His grace He rules over all creatures.  If He is against us all our labor is in vain, but with His blessing our work will prosper.”
Think, for a moment, of how many seemingly mundane tasks fill up the days of the mothers we honor on Mother’s Day.  None of those are separated from the Lordship of the risen Savior.  The work done by mothers (and by any of the rest of us) is meaningful because it is blessed by the Lord who, even after his resurrection, is so deeply involved and interested in the details of our material, bodily lives.
Too often mothers are honored one day and taken too much for granted the rest of the year.  Is the reason God gives us the first day of every week as the Lord’s Day that we need (at least) a weekly reminder of Christ’s involvement in the details of our lives?