A Picnic on the Beach with Jesus 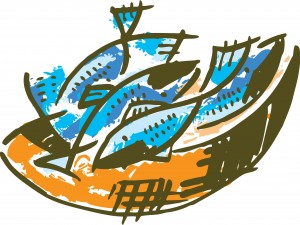 Jesus manifested himself, revealed himself, to the disciples. “Appeared” is a weak translation. John 1:31 referred to Jesus being revealed to Israel. Now he is being revealed to his disciples. Jesus’ resurrection marks the beginning of his glorification, even though he has not yet ascended. The disciples knowledge of the Lord, like yours, is dependent on his revealing himself. He consciously chooses to make himself known and visible to his people. The text brackets itself with references to Jesus revealing himself. This is the third appearance of the risen Lord to his disciples. (There had been other appearances, including to Mary Magdalene, but John is counting those to the disciples or a significant portion of them.)

Jesus has revealed himself as the new Adam. John alone mentioned that the location of the tomb is a garden. There doesn’t appear to be anything significant about one side of the boat as opposed to the other, but they follow his command, and cast on the right side. Their obedience is rewarded by a catch of 153 large fish, too much a haul to pull into the boat. Ezekiel 47 recounts a strange vision of a life-giving river flowing from the temple eastward into the Dead Sea. Where it flows there is life, and part of the picture is the large number of fish.

Respond to the risen Lord. In the early light of dawn the fishermen do not recognize the One calling from shore. It takes the miracle of the fish for John (again before the others) to recognize the Lord. And this intermediate state of Jesus, changed by his glorification, yet the same person, leaves the disciples not daring to ask, “Who are you,” for they do know it is the Lord, v.12. They are hesitant to start eating, and it takes the Lord giving them bread and fish to start the meal. John may be the first to recognize the Lord, but Peter is again the impetuous one. Grabbing his outer garment, since he had stripped down (probably to the essentials) for work, he throws himself into the sea to cover the 100 yards to shore and his Lord. When you know that Jesus is alive, that he is your Lord, you have to worship him. John records Jesus revealing himself to the disciples so that you can come the same realization: Jesus lives!

But, why these details? Why this picnic meal? The incarnate Lord, raised in his body, blesses what you do. Avoid fanciful interpretations. The disciples were not being unfaithful by fishing—they needed to eat! This was not the first day of the week. They were going about normal workday activity.

Why did Jesus take the time for this miracle and this meal, when he could have been teaching the disciples? Jesus is concerned with the seemingly mundane, everyday activity of fishing. His identifying miracle blesses their work. (He could have chosen some spectacular but unrelated miracle to reveal himself.) In Genesis mankind is given dominion over the creation (underneath the lordship of God). The risen Lord claims that position of sovereign lordship and blesses the night’s labors abundantly. The risen Lord continues to be concerned with what you, his people are doing. All of your activities, as long as they glorify God, are part of the work of his kingdom, and proceed only with his blessing. The Word became flesh, John told you back in chapter 1. Here in chapter 21 he shows you that he, even as the risen Savior, is involved in a real meal on a real beach with a real fire. Jesus died bodily and rose bodily to redeem you. Salvation is not escaping the body, but redeeming it. Use your body to God’s glory.

Revel in fellowship with your risen Savior! Jesus addresses the fishermen as “little children” (literally). “Dear friends” may convey the force, but departs from the text. Think of British “lads,” which can be used to address grown men.

Jesus invites the disciples to a fellowship meal. This breakfast sets the scene for the restoration of Peter and the call of him and the disciples to feed Christ’s sheep. Note the charcoal fire! But before he gets into that, he feeds the tired, hungry, cold disciples. This breakfast is not a communion service, but it does recall the feeding of the 5000 (and John’s Gospel tells you that Jesus ties that with feeding upon himself, the bread from heaven). The Lord is the host, you are his invited guests. He, the risen Lord, provides for your needs. All of your life, your daily work as well as public and private worship, is now lived in the presence of the risen Lord. Herman Ridderbos comments: “Why does Jesus, who has fish for the meal on the fire, tell the disciples to bring fish from those they have caught? . . . Only as the disciples bring fish that have just been caught does the meal prepared by Jesus achieve its full significance. Jesus makes the usual meal of bread and fish, which the disciples have so often shared with him, into a resurrection meal, not only by sitting down with them as the Risen One, but also by involving them in it as those who share in his resurrection power and as those who will continue his work on earth.” (The Gospel of John: A Theological Commentary, p. 662).

The command to Peter to follow Christ comes to you as well. He summons you to be busy about his work, the work of building his church as well as the daily activity of glorying him in what you do. Jesus has this revelation of himself recorded by way of summoning you to walk in obedient trust. This fellowship meal to which he invites you calls you to go and serve him throughout this week.

Because Christ has revealed himself, you have been given the task of serving him throughout the whole period bracketed by his comings. He is the risen Savior. Are you ready for fellowship with him today and at the great wedding feast of the Lamb?