A Most Important Preface 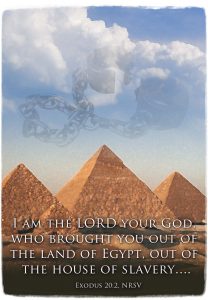 When you start a book, do you read the preface? Or do you get right into the meat of the writing? I have usually found prefaces interesting, but not crucial to understanding the author. The preface to the Ten Commandments, Exodus 20:1-2, however, gives you the crucial perspective you need to understand what God is saying here.

Know your God. Your God speaks to you. God has not left you in ignorance. Marvel that he communicates with you. He has revealed himself clearly enough in creation and conscience to leave all without excuse, Romans 1:21,28; 2:14,15. Here he identifies himself by his covenant name, the Lord, Exodus 3:14. God is the author of these commandments. They are not a collection of human ethical principles, nor are they borrowed from the Code of Hammurapi. He gives authority and permanence to the law. God’s speaking, even his speaking the Ten Commandments, is an expression of love for his people. And on the part of his people, love is expressed in obedience, John 14:15. Children, recognize that you owe your parents not just verbal appreciation, but obedience.

Jahweh has made his covenant with you. The Ten Commandments are a covenant formulation, Both the Lord, Exodus 19:5, and Moses, Deuteronomy 5:2, speak of keeping the covenant. This covenant adopts features of contemporary covenants: preamble, requirements, blessings, curses, and duplicate copies. These were not parity agreements, but suzerainty treaties. The making of this covenant constituted Israel as a nation, as God’s own possession. The covenant God had made with Abraham becomes a covenant with the sons and daughters of Abraham. God continues to use the covenant structure in dealing with people. Rebellious mankind is under his covenant curse. The people he has redeemed live in covenant fellowship with him. The covenant relationship expands, after Christ came to die and rise for you, to include all those who share in the faith of Abraham. The covenantal structure continues. God’s covenant includes both law and grace. The heart of the covenant is that God is your God, and that you are his people, Genesis 17:7; Exodus 19:5,6; 1 Peter 2:9,10. With it goes the expectation of obedience: Genesis 18:19; Exodus 19:8; 1 Peter 1:15,16; Romans 13:9. “In the Old Testament already it is God who, immediately after the fall, out of grace, puts enmity between humanity and the serpent and brings humanity to his side (Gen. 3:15). It is he who elects Abraham and the people of Israel born of him to be his possession (Gen. 12:1; Exod. 15:13, 16; 19:4; 20:2; Deut. 7:6f.), who makes a covenant with them and gives his laws to them (Gen. 15:1; 17:2; Exod. 2:24-25; Deut. 4:5-15), who gives the blood of the altar fore atonement (Lev. 17:11), and does all that is needed for his vineyard (Isa. 5; Jer. 2:21). But in virtue of that election and on the basis of that covenant, that people is also obligated now, on pain of the law’s curse (Deut. 27:26), to walk before God’s face with integrity and to keep his commandments (Gen. 17:1; Exod. 20: Deut. 10:15-16; etc.).” (Herman Bavinck, Reformed Dogmatics, Vol. 3, pp. 493-494).

Understand what he has done for you. Jahweh redeemed his people from Egypt. Redemption forms the foundation for sanctification. Israel was not delivered from Egypt on the basis of their obedience. God saves graciously–then gives them the law. The ten plagues were not only wonders, they were confrontations between the Lord and the idols of Egypt. The earlier plagues culminated in the Angel of Death, but he passed over the homes of Israel because of the sacrifice of a lamb in each home. The preface parallels the portion of ancient treaties in which the sovereign lord recites the benefits of his rule. The motive for obedience is gratitude. The Exodus is the great Old Testament redemptive event.

God has brought you out of slavery to sin. 1 Peter 1 tells you that you have been redeemed by something more precious than gold. You have experienced the real Exodus, the redemption God accomplished in Christ, the great Passover Lamb. He took upon himself the curse of the covenant, the curse which you and I deserve as our just judgment. The Father poured out that wrath on his beloved Son! Here you see the deepest love that the Father could possible have. You have been redeemed from bondage. You have been redeemed, not by a lamb that formed the basis for dinner, but by the Christ, by the Lamb of God. Yes, the law still has the function of showing you your sin. As you hear the law, listen to the preface, to the assurance that God has redeemed you. Understand that in sending his Son to die and rise for you, he has removed your guilt. Don’t let doubt or continued feelings of guilt separate you from Christ’s love. The better you know God, the more you recognize your sin—but also, the better you understand the depth of Christ’s forgiveness, not just of people in general, but of you. Appreciate the liberation from the enslaving power of sin that Jesus provides. Clothe yourself with the Lord Jesus Christ. Trust his forgiveness for what you’ve done this week. Clothing yourself involves living as those who belong to the daytime, putting off sin, structuring your life according to God’s Law. The Preface tells you who God is, ultimately, who he is in Christ Jesus. As you look at the commandments see, not just the specific instructions, but understand more clearly the holiness, love, and faithfulness of your God.

Trust and obey him. Desire fellowship with your God. Israel not only heard God speaking, they, through Moses, responded. Much of the last half of Exodus describes Israel building a Tabernacle as a place where they can meet with God. The covenant is unilateral in origin (God establishes it), but bilateral in its working (God and his people have fellowship with each other).

Live in obedience to him. Where you have fellowship with God, you live in obedience to him. “The Decalogue strikingly illustrates the redemptive structure of the theocracy as a whole. It is introduced by the summing up of what Jehovah has done for Israel in delivering them from the house of bondage.” “The preamble brings the affection to Jehovah, in view of what he has redemptively done for the people, to bear through a responsive affection upon their conduct.” (Geerhardus Vos, Biblical Theology, pages 145, 147-148). Understand how the commandments reflect the character of God. We will look at how the specific commandments do that. (How do you respond to the misuse of God’s name? Do you see obedience as just a matter of blipping out profanity? Or do you look at what you take into your heart–and at what comes out?) Understanding that the commandments reflect the holiness of God helps you see the importance of sanctification, of growth in obedience, in your own life, Hebrews 12:14.

The Ten Words are Ten Commandments. They are imperatives, telling you how God wants you to live. Therefore, obey! But before God gives those commands, he reminds you who he is and what he has done for you. The imperatives rest on the great indicative—God loves you so much that he has redeemed you!