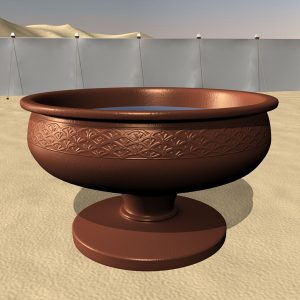 The basin was for washing. God had Moses make a basin for the courtyard of the Tabernacle. It was made from the bronze mirrors of the Israelite women, donated for that purpose. Parents teach children to wash hands so that they don’t spread or ingest germs. But sanitation and microbiology were not the reasons for the basin in the courtyard. Not just the hands, but also the feet of the priests were to be washed. Leviticus 1 tells us that at least some of the sacrifices were washed as port of their being presented to God. Interestingly, we are given far fewer details about the basin in the courtyard than we are about other items, such as the altar or the furniture in the Tabernacle. Solomon’s Temple seems to have been built and furnished like the Tabernacle, but on a much grander scale. 1 Kings 7 records the bronze sea, which along with ten smaller basins, provided water for cleansing in that building. END_OF_DOCUMENT_TOKEN_TO_BE_REPLACED 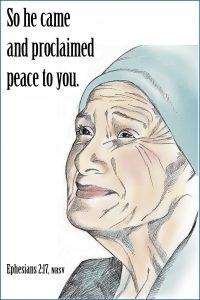 Live separate from the world. The courtyard marked the holy location of the tabernacle. The courtyard around the tabernacle was a rectangle, about 75 by 100 feet, with posts, apparently supported by pegs and ropes, and was made of linen. It was not designed to keep livestock in or out, but to mark out the precincts of the tabernacle. That was the area that was particularly holy as the symbolic dwelling place of God. Holy means set apart to God. Sinners cannot approach the presence of a holy God without the problem of their sin being dealt with first. That is why, as one entered the courtyard he came to the altar before he drew near to the tabernacle itself. The courtyard was not available for the people generally. It appears from Leviticus 1 that they could bring their animals to be sacrificed into the courtyard to the entrance of the tabernacle. But, usually, it was only the priests who spent extensive time in the courtyard. The closer one came to the most holy place, the more limited the access. Although Israel was God’s holy nation, the fence around the courtyard kept the people at at distance. “The Courtyard was new evidence of the fact that, although the Lord dwelled among Israel, the Israelites could not freely approach Him. (Cf. 39:9-20; Pss. 100:4; 116:17-19.) The work of Christ has removed this restriction; the Lord now dwells in the hearts of his people. We are privileged above the Israel of the Old Covenant: besides the approach to the Lord’s throne through prayer and ‘falling asleep in the Lord’ (cf. 1 Cor. 15:18), which was also open to the Israelites, we no longer have a courtyard beyond which the vast majority of the Israelites could not approach, and which they were not always able or allowed to enter.” (W. H. Grispen, Exodus, pp. 259-260). END_OF_DOCUMENT_TOKEN_TO_BE_REPLACED 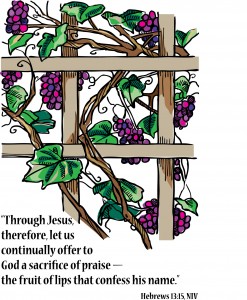 You need a substitute. Why bring a sacrifice? Some have suggested that the sacrifice was primarily something going on inside the person bringing it. It helped him feel close to God. This view has been promoted by those who suggest that mankind is inherently good, or at least has a spark of goodness that can be fanned into a flame. Others have suggested that sacrifices really didn’t happen in the wilderness (despite what Exodus says!), but was a practice picked up from the Canaanites, which the prophets later tried to modify in the direction of spiritual worship of God. More recently the idea that God would give his Son to die in the place of sinners has been dismissed as cosmic child abuse. END_OF_DOCUMENT_TOKEN_TO_BE_REPLACED 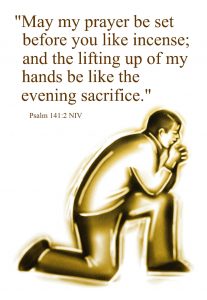