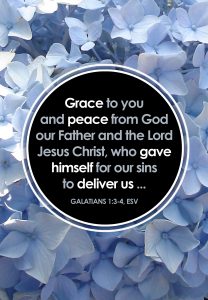 Listen to Christ’s messenger. This is a “not” letter from the apostle. An apostle is a “sent one.” His authority is not his own but that of his sender. An insult to an ambassador is an insult to the country which sent him. Paul’s apostleship was not from man. the source of his authority was not human, contrary to allegations made by false teachers in Galatia. (Note that Paul does not hesitate to stress the negative when necessary.) Paul’s apostleship was not even by man. Man was not even the means of commissioning Paul. Paul is countering allegations of having a derived apostleship, see 1:11-2:21. Paul defends his apostleship because that is a vector of attack by false teachers against the gospel. “May God send us men who are not deceived, men who will respond to the forces of unbelief and compromise…. The Epistle to the Galatians is a polemic, a fighting Epistle from beginning to end. What a fire it kindled at the time of the Reformation! May it kindle another fire in our day—not a fire that will destroy any fine or noble or Christian thing, but a fire of Christian love in hearts grown cold!” (J. Gresham Machen, Machen’s Notes on Galatians, p. 8). END_OF_DOCUMENT_TOKEN_TO_BE_REPLACED