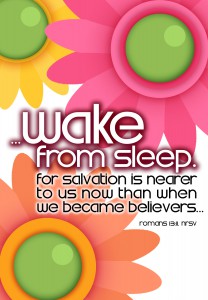 It’s time to wake up! Do you remember your parents waking you up early to go fishing or on some special outing? You struggle into consciousness and get dressed, ready to go. The time to wake from sleep that Paul tells you is now is not just the beginning of an ordinary day. Rather, this is the time of salvation. This is the completion of the work of redemption, as Paul indicated in Romans 8:23-24.

Some have suggested mistakenly that Paul taught that Christ was going to return very soon, during his lifetime. Paul, however, is thinking of time more as Jesus did. John’s Gospel mentions repeatedly that his time had not yet come. His time was the time of his suffering, death and resurrection. Paul thinks of time in a way similar to the Old Testament prophets, who spoke of the coming of the day of the LORD. That was the day of God’s judgment on his enemies and deliverance for his people. The next great event in redemptive history is our salvation, the completion of Christ’s redemptive work, the final judgement, and the ultimate restoration of creation in the new heavens and earth.

Harold Camping has not made it any easier to warn people of what they would rather ignore, that the Lord’s return is coming. Too often discussion of Christ’s return has focused on the issue of dates. As Christians, however, we are called to be always ready. Rather than trying to calculate when, we ought to be asking, “How should I be living? What should I do as one who is awake?”

That, of course, is where Paul takes you. Because the day is near, get rid of the works of darkness. Put on the armor of light (think of his description of the Christian’s armor in Ephesians 6). He provides a list of examples of behavior to put off, not seeking to be comprehensive, but to give examples. You do not belong to the darkness, though you live in this present evil age. Your citizenship is in heaven. Your real life belongs to the day.

Paul does not just exhort you to get rid of certain evil behaviors. He does more than encourage you to put on the armor of light. At the heart of what you need to do is put on Christ. You have been united to him in his death and resurrection. And your life as one who walks in the light of the dawning day is one that increasingly reflects the character of your Lord. You belong to the day. Wake up and live that way!

Thomas R. Schreiner in his commentary on Romans writes: “Even though believers have already ‘put on Christ’ (Gal. 3:27; Col. 3:10) and put off the old person (Col. 3:9), they must also put on Christ (Rom. 13:14) in the concrete circumstances of everyday life. The desires of the flesh (Rom. 13:14) still threaten believers, and thus a conscious effort is needed so that no provision is made for them.”