Your King Has Gone Up! 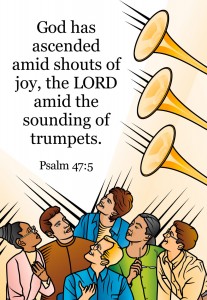 How seriously do you take the kingship of Christ? Acts 1:6-11 sets the stage for the accounts given in the rest of the book by showing you the majesty of your ascended Lord.

Celebrate the triumph of your ascended Lord by serving him as King. Old line dispensationalism sees the church as a parenthesis. But Acts 1 makes clear that the ascended Lord is still very much in charge of his church. This account also is the antidote to a practical ignoring of the kingship of Christ.

Your daily life, lived between his ascension and his return, is lived in the presence of and subject to the King. The life of the church and the lives of members of the church, is the life of the kingdom. Psalm 24 celebrates the entering of the King of glory into his city. Perhaps written by David for the bringing of the ark to Jerusalem, it anticipates the ascent of Christ. Remember that the ascension of Jesus means that he is the great King. Because he is the great and good King, you can trust him and serve him.

He ascended as the God-man. Our human nature is there at the right hand of the Father. As the God-man he intercedes for you.

Look for your Lord to return in the clouds. As he ascends, a cloud receives him out of their sight. This is not just a meteorological observation. Rather the cloud calls to mind Daniel 7 and the coming of the Son of Man. It reminds of Mt. Sinai and of the theophonic appearances in the Psalms, see Psalm 68.

This is the King of Glory who is entering triumphantly. Death cannot hold Jesus. After a suitable time of appearing to his disciples, it is time to ascend to his throne.

The sovereign Lord is there for his people in their suffering as well as in their joy. When the good news is proclaimed in Acts, it is the news of the Savior who had been betrayed and crucified, but now has been raised to life and exalted to the right hand of the Father (Acts 2:33). When Stephen, the first martyr is being stoned, he sees heaven open and the Son of Man ready to receive him. The ascended Lord is so connected to his suffering church that he asks Saul, “Why do you persecute me? When you go through suffering, it is with the knowledge that the ascended Lord continues to see you and care for you.

The angels promise that he will return in the same way. You live your life bracketed by the comings of Christ.

Be the witnesses that you are. The ascended Lord empowers you to be his witnesses. Richard Gaffin writes: “The single most important activity of the apostles is surely that. . . of witness to Christ (e.g., John 15:27; Acts 1:8; 13:31). The apostles bear witness, authorized and empowered by Christ himself, to his resurrection as the fulfillment of covenant history.” (Perspectives on Pente­cost, p. 91).

Acts 1:8 ties the gift of the Spirit with the idea of power. This empowerment with the Spirit is not just an example, a paradigm that we are to reproduce in our lives. Rather, this event, one event though mutli-faceted, is the resurrection, ascension, and Pentecost–all part of the history of what Christ has done to accomplish your salvation. The power is given to the apostles, but also to the church—built on the foundation of the apostles and prophets–with Christ Jesus the chief cornerstone.

You may think of being witnesses as something novel with the Great Commission. But Jesus uses language from Isaiah 43:10, 12; 44:8, where Israel is described by the Lord as “my witnesses.” The nation of Israel, corporately, as well as individually, are witnesses. Dennis Johnson comments: “Jesus is claiming to be this unique Lord, the God and Savior of the new Israel, whom he empowers with the Spirit and commis­sions as his witnesses. Those who worship Jesus as Lord, who pray to him and serve him, bear witness that he, not the idols, is the only God and Savior. The Spirit is sent to empower us to testify to the divine glory that the Son deserves.” (The Message of Acts in the History of Redemption, p. 44). Don’t underestimate the importance of the official heralding of the name of Christ. Acts has plenty of that. But also avoid the reactionary view that only ordained preachers can be witnesses about Jesus. See Acts 8:4.

Christ’s kingdom extends to the ends of the earth. The question of the disciples betrays a very limited, ethnocentric, notion of the kingdom. Jerusalem, Judea and Samaria, and to the ends of the earth are not simply a paradigm for local, regional, and international witnessing. Rather, Acts 1:8 outlines the book. The kingdom of the ascended King cannot be limited to one nation.

Jesus declares to the apostles that they are witnesses. This is directed specifically to the apostles, but by implication declares that you also, as part of the ends of the earth, are witnesses. While not direct witnesses of the resurrection, you do bear testimony to the work of God and to the reality of his grace. Your life, your words, are testifying about your God, about what he has done. Either the testimony is true or it is not. You are witnesses of what God has done in sending Jesus to die for your sins and to shape you into his holy people.

The ancient doors have lifted up their heads, for the King of glory has come in. The cloud has received the Son of Man in his glory. You, brothers and sisters, are the witnesses of his triumphal victory.