Why Was Christ Buried? 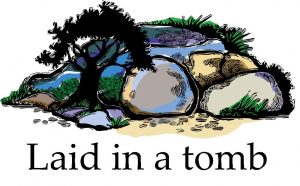 A funeral may be a good way to honor someone, to remember what she or he has done while alive, but burial marks the end of their activity. Why the emphasis in Scripture on the burial of Christ? It is described in all four Gospels, including our text, Luke 23:50–56, and is part of Paul’s summary of things “of first importance” in 1 Corinthians 15:3–4. It is included in the Apostles and Nicene Creeds.

Christ was buried because he truly died in your place. He suffered for your sins. Don’t look at the death of Christ as simply the tragic death of a martyr. He died as the sin-bearer in the place of his people. This is the last stage in the events of his arrest, trials, and crucifixion. Jesus had spoken words of comfort to the thief, and had committed his spirit into his Father’s hands. The curtain of the temple had been ripped, and he had breathed his last. John’s Gospel tells of the spear thrust which ensured that Christ was truly dead. That certainty is increased by his burial.

Christ’s burial is the final step in his humiliation. He had set aside the glory and privileges of heaven in order to be your Savior. He was born of Mary, truly human as well as fully divine. He lived and suffered during his life. Now is the last point of his humiliation. He was under the power of death. Death seems to triumph. He remains in the grave for a time. He fulfills Isaiah’s prophecy about making his grave with the wicked and with the rich. His friends failed to believe in his resurrection. Joseph and the others acted out of love–but is this what they would have done had they been certain that three days later he would be alive? His body was left in the tomb. Christ’s treatment in his burial is somewhat parallel to what happened during his triumphal entry the Sunday before. He had been welcomed as the messianic King by a crowd that was ignorant of what the work of the Messiah involved. The shouts of the crowd are profoundly true, but are true because he was not about to do what they expected the Messiah to do—rally an army and drive out the Romans. “Those who bury Jesus. . . do not understand Him as He wants to be understood. . . . Never had Christ been so concealed as now, never had divinity receded so far as now, never had He become so completely unknown to the sons of His mother as now. The discrepancy between the majesty of God and the body of the man Jesus was never as great as now.” (K. Schilder, “Christ Buried,” in Christ Crucified, p. 555). The Lord’s Supper reminds you of the death of your Savior. It summons you to trust, not in yourself, but in the one who died and was buried for you. In his burial, as well as in his death, Christ is the second Adam, representing his people. As you face death, as you stand beside a loved one who trusts the Lord, there is no step of that journey that Jesus has not trod before you.

Christ’s burial transitions to his glorification. Christ is no longer in the grasp of his tormentors. He has already committed his spirit into the hands of his Father. His body is in the hands of friends. He is buried with the rich. His death was with the wicked, executed as a criminal among other criminals. But his burial is in the newly-hewn tomb of Joseph of Arimathea, a member of the Sanhedrin, and a secret believer in Jesus. At this late point Joseph’s commitment to Christ becomes visible. Burial was important in the Old Testament: note the burials of the Patriarchs. Christ’s body is treated with respect.

Christ was buried to rise again. The second Adam underwent temporarily (as you will, unless he returns first) the separation of body and soul. The tomb is the prelude to the resurrection. Christ was laid in the tomb and the rock rolled in front of the entrance. As he was buried he entered the final part of his humiliation. At some mysterious point (and the Bible doesn’t give us the details) between then and Sunday morning his humiliation ended and his exaltation began. He was raised from the dead with a wonderful, glorified body. He spoke with his followers. He ascended to heaven and has taken his seat at the right hand of the Father. He rules over his and our enemies, and is preparing for the glorious day of his return. He is truly alive, raised as the firstfruits of your resurrection and mine. “[T]he burial of Christ represents the beginning of his glorification. . . . God shows us that the grave is but an intermediary state, and that and that heaven is busy preparing for the time when this ‘intermediary’ condition will no longer be necessary. Christ receives, He accepts, the new grave in which never yet man lay. . . . He who enters the grave here is none other than the Kurios, the Lord.” (K. Schilder, “Christ Buried,” in Christ Crucified, pages 558–559).

You were buried with Christ so that you could rise again. The burial of Jesus is part of the good news: 1 Corinthians 15:3,4. Christ’s burial means that the old you is dead. As Paul shows how incompatible continuing in sin is for those who trust in Christ, he reminds you in Romans 6:1–4, not only that you died with Christ, but you were buried with him as well. Just as the humiliation of Christ has come to an end, and it is inconceivable that he should again be subject to suffering or to the power of death, so the enslaving power of sin has been broken for you who have been baptized into Christ, and who by faith are raised with him. The Lord’s Supper functions as a means of grace because the Lord, whose death it remembers, is no longer in the grave. He is alive, and so are you—in him! “And this, too, was brought about by the secret providence of God, rather than by the premeditated design of men, that a new sepulcher, in which no man had ever yet been laid, as obtained by our Lord, who is the first-born from the dead, (Colossians 1:18) and the first-fruits of them that rise, (1 Corinthians 15:20). God intended, therefore, by this mark to distinguish his Son from the remainder of the human race, and to point out by the sepulcher itself his newness of life.” (John Calvin, Commentary on a Harmony of the Gospels).

Why was Christ buried? So that you who are united to him by faith, you who were buried with him in baptism, so that you might be raised with him to a new and glorious life—now, and for eternity.