Why do you believe? 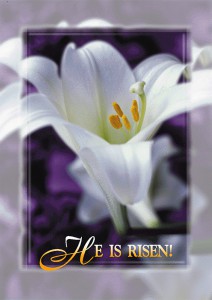 Seeing and believing.  Those are often contrasted.  But John (our text Sunday morning is John 20:8-9) sees them as connected as he writes about believe in the resurrection.  John, who refers to himself as “the other disciple, the one Jesus loved,” came running with Peter to the empty tomb.  He tells you that it was only when he had entered the tomb and seen that he believed.  Up to that point, even as one of the disciples closest to Jesus, he had failed to understand the Scriptures that taught the resurrection of the Messiah.
Although you do not have the opportunity to see Jesus with your physical eyes, John wrote his Gospel so that you might believe in Jesus, John 20:30,31.  He invites you to see the risen Savior with eyes of faith.  He wants you to see him as the One who died in your place bearing the guilt of your sin, and who then rose for your justification.  He wants you to see him as the One who gives hope and meaning, even in the most difficult of times.
God gives you exactly what you need in order to believe.  For Peter and John it was the empty tomb with the neatly folded grave clothes.  For Mary it was her gently spoken name.  For the disciples gathered that evening it was the Lord appearing among them and showing them his hands and his side.  For Thomas a week later, it was the offer to touch the scars.  All of those are recorded for your benefit.  Along with that, the Savior has poured out his Spirit to give you the conviction that he truly lives.
Perhaps the danger we face is not doubting the fact of Jesus’ resurrection, but rather underemphasizing the physical character of the resurrection, both his and ours.  We know that he rose, but do we realize that he continues to be the God-man, even as he has ascended into heaven.  Do we give the emphasis we should to the hope of our resurrection in the last day?  Or are we satisfied with less (as wonderful as it is), with the immediate presence of the soul of the believer with the Lord.  Look forward with glorious hope, as Scripture does, to the day of the Lord’s coming and your bodily resurrection that takes place then.