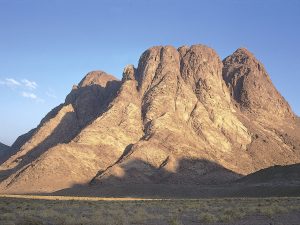 As we prepare for “the big one” here in the Pacific Northwest we think negatively about earthquakes. But the earthquake described in Exodus 19, terrifying though it was, indicated something very positive. Hebrews 12 ties that earthquake to your unshakeable inheritance of God’s kingdom.

The Lord’s coming down to Mt. Sinai is an earth-shaking event. Understand who is coming down. Imagine what you would have seen, heard, and felt, had you been among the Israelites that day. The mountain was covered with darkness—a thick cloud and smoke. There was thunder and lightening, and a very loud trumpet blast, increasing in intensity. You would have felt the whole mountain shake violently. Why these spectacular happenings on the mountain? God himself, the Creator of the universe, was coming down on the mountain to meet with his people.

Appreciate the holiness of your God. You cannot miss the emphasis on the holiness of God. The fence and warnings kept people off the mountain, lest they be destroyed. But, as you read this together with Exodus 24, notice the progression. The people assemble at the base. Part way up the mountain is a place where Moses and the elders of Israel meet with the covenant God, a place where an altar was built and they ate a meal in God’s presence. The priests had to be consecrated, purified, set apart to God in order to approach as far as they were allowed. And Moses alone ascends higher to receive the tables of the law and the plans for building the Tabernacle. The mountain pictures what was to be recreated in the Tabernacle and later the Temple. The outer court was where the people assembled. In the inner court the priests offered sacrifices and entered the holy place to burn incense. The most holy place contained the ark of the covenant with its mercy seat, symbolizing the throne of the Lord in the midst of his people. The law, about to be spoken from the mountain and then expanded in the regulations God gave Moses, also portrayed the holiness of God.

Through their mediator, the people speak with God. Not only does God speak with his people, but he is pleased to have his people have fellowship with him. Through Moses, their mediator, they speak to the Lord. The initiative in making the covenant is God’s, but the communication is two-way. “God is the Creator, man a creature; and with that statement an infinite distance between the two is given. . . . Accordingly, if there is truly to be religion, if there is to be fellowship between God and man, . . . then God has to come down from his lofty position, condescend to his creatures, impart, reveal, and give himself away to human beings; then he who inhabits eternity and dwells in a high and lofty place must also dwell with those who are of a humble spirit (Isa. 57:15). But this set of conditions is nothing other than the description of a covenant. If religion is called a covenant, it is thereby described as the true and genuine religion. This is what no religion has ever understood; all peoples either pantheistically pull God down into what is creaturely, or deistically elevate him endlessly above it. In neither case does one arrive at true fellowship, at covenant, at genuine religion. But Scripture insists on both: God is infinitely great and condescendingly good; he is Sovereign but also Father; he is Creator but also Prototype. In a word, he is the God of the Covenant.” (Herman Bavinck, Reformed Dogmatics, Vol. 2, pp. 569-570).

God has brought you into an unshakeable kingdom. The temporary theophany leads to the incarnation. God makes his presence known in a temporary appearance. But this looks forward to something better. “The first great theophany of the OT was at Sinai, where ‘God descended on it in fire’ and appeared in the midst of loud ‘voices and torches and thick cloud’ and ‘fire.’ Sinai was the model theophany for most later similar divine appearances in the OT, and to some degree God’s coming at Sinai stands in the background of the Spirit’s coming at Pentecost.” (G. K. Beale, A New Testament Biblical Theology, pp. 594-595). The God who has spoken in various ways has now spoken in his Son. The Son of God became man. The purpose of his incarnation was to be the Mediator.

God has brought you into his heavenly, unshakeable kingdom. Hebrews 12 tells you that in Christ you are no longer at a distance from your God. You have come, not to a mountain that can be shaken, but to the heavenly Jerusalem. You are part of a kingdom that cannot be shaken—because you have a better mediator than Moses.

It would have been awe-inspiring to witness what Israel say—but you have something far better.