What Happened in the Garden 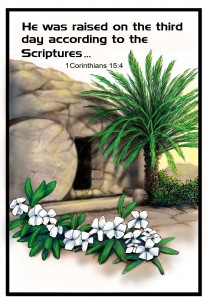 Your garden may be a quiet place for retreat, relaxation, and contemplation. John 20:1-18 records two events that happened in a garden, events that warrant contemplation, but also change the history of the world.

While John’s account of Christ’s resurrection is longer than any of the other Gospels, each tells the story from a different perspective, including different details, but all in agreement on the truth of the central idea: Jesus, who had been crucified, is alive! At the end of John 19 and again in our text this Gospel emphasizes that the burial and resurrection took place in a garden.

Mary Magdalene is the first visitor John records at the tomb. John focuses on her, while other Gospel writers include women who came with her. Apparently as soon as she sees the stone rolled away she assumes that the body has been taken from the tomb, so she runs to tell Peter and John. John returns to her later.

Peter and John run to the tomb, John arriving first. Impetuous Peter runs past into the tomb. What they see gives the lie to theories, such as the excuse made up by the soldiers that they had fallen asleep and the disciples had stolen the body. The linen grave clothes were lying there, with the cloth that had been around Jesus’ head folded separately—hardly the practice of grave robbers! John contrasts the scene at this tomb with the account of the raising of Lazarus, who returned to life still bound up in the burial cloths.

There at the garden tomb John saw the evidence and at that point believed. His mentioning his faith is not a boast, as though he were ahead of the others. Rather, as will be clear in Thomas’ encounter with the Lord, John is humbly reflecting that it took the sight of the empty tomb for him to believe. He mentions that they still did not understand from the Scriptures that Jesus had to rise from the dead.

You may sympathize with that lack of understanding. How many clear Old Testament prophecies are there of the resurrection? You think of Jonah 2, explained by Jesus himself. Isaiah 53 speaks of the Messiah rejoicing in his successful work. Psalm 16 is not only David’s affirmation of faith, but can be properly understood only as you look at the resurrection of Jesus. But John, writing this Gospel some years after that moment when belief in the resurrection dawned in his heart had come to see that none of the promises of the Messiah, none of the assurances of God’s presence and faithfulness, would make any sense were Jesus still in the tomb. As becomes clear at the end of the chapter, John writes his Gospel so that you and I, who have not seen the tomb with our physical eyes, might believe in Jesus.

The attention shifts to Mary Magdalene, returning to the tomb, but not as quickly as the two. (Note the inconspicuous but significant mention of “homes” in v. 10. Though the disciples would gather later to discuss what the women had told them, John does not go with Peter. Rather, he goes to his house, likely because there is someone in his home who needs to know that good news, John 19:27.) One reason for her slow return may have been her weeping.

John tells of the resurrection by showing you Mary Magdalene’s encounter with the risen Christ. He had cast seven demons out of her, Luke 8:1-3. His cleansing, healing power had touched her life, and she, along with others, had devoted herself to him. She had been present at his crucifixion and burial–when most of the male disciples had abandoned their Lord, as far as the Biblical record shows. The Gospels present a far different view of Mary Magdalene than the misconceptions fueled by The Da Vinci Code, and earlier Gnostic writings, such as the Gospel of Thomas or the Gospel of Judas. The relatively late suggestion that Mary had been a prostitute is without Biblical support.

Mary wept for her Lord. Blinded by tears, she seems not to paid much attention to the angels. Yet note the “my Lord” of v. 13, compare with v. 2. Jesus is Mary’s Lord in a way that he is not Lord to the angels (though they use the same term to address him). They serve him more perfectly than you or I do–but you know him as your Savior. He is your Lord because he bought you with his blood–and none of the angels can claim that. You are incapable of experiencing the heart of what the celebration of the resurrection is all about unless he is your Lord, your Savior. Notice also where the angels are seated—one at the head, the other at the foot of the place where the body of Jesus had lain. Where else do you find a pair of angels? The cherubim over the mercy seat. The Tabernacle that housed the ark was decorated with gold-wrought fruit, reminding the people of Israel of the Garden from which Adam and Eve had been barred. That first Garden also had cherubim, but the wielded a fiery sword to keep the sinners out.

Then, turning, she sees Jesus, who repeats the question the angels had asked, “Woman, why are you crying?” As John records Mary mistaking the questioner for the gardener, he is quietly reminding you of the setting of all of this. In the other garden sin had brought death with all of its ugliness into the world. In this garden, because the sinless One had obeyed perfectly and had given his life as the Lamb of God, death now had worked backwards. The Second Adam gives life in the garden, and that gift points you ahead to the glorious garden of the new heavens and earth.

Jesus called her by name, “Mary.” That one word brought recognition. Her Lord was not dead. He was alive! Mary addressed him as “Teacher!” The title carries far more respect and love than it does in our culture. In fact, John, writing in Greek, does what our translations into English do–he preserves the word as she spoke it in Aramaic, the language of the Hebrews of the day, “Rabboni!” It implies submission and faith. There is more in the term than can be translated into English in one word. You must address Jesus in trust. It is not enough to know about Jesus Christ. It is not even enough for you to be convinced that the tomb is empty. You need to trust in him yourself. You need to call him Rabboni. That involves not just a one time vocalization of the word, not just a one time praying the sinner’s prayer, but a life of trust and commitment, of submission to his lordship.

Jesus sent Mary with good news. The command not to hold on to him was not an arbitrary instruction. Rather, Christ was showing her that his resurrection was the first step to ascension and glory. No longer would he walk the paths of Galilee. No longer would Mary and the others minister to his needs. Christ’s relationship with her would change–and for the better. His ascension would lead to Pentecost, and to Christ’s presence through the Holy Spirit.

Rejoice that you are included among the “brothers.” The term may have included Jesus’ own brothers, but more likely refers to the disciples. Jesus’ relationship with his Father is unique. But because he is the risen Savior you have become adopted sons and daughters of God. Jesus speaks of “my Father and your Father, my God and your God.” Because the garden tomb is empty, Jesus’ God and Father is your God and Father as well. That is good news. That is reason to rejoice!

Have you heard the risen Savior call you by name? Do you know that he is your teacher, your Lord, and your God?

“What does Christ mean for us? For what do we need him? If we have learned to know ourselves guilty sinners, destitute of all hope and life in ourselves, and if we have experienced that from him came to us pardon, peace and strength, will it not sound like mockery in our ears if somebody tells us that it does not matter whether Jesus rose from the dead on the third day? It is of the very essence of saving faith that it clamours for facts, facts to show that the heavens have opened, that the tide of sinful nature has been reversed, the guilt of sin expiated, the reign of death destroyed and life and immortality brought to light.”

“There is great comfort for us in this thought that, however dim our conscious faith and the sense of our salvation, on the Lord’s side the fountain of grace is never closed, its con­nection with our souls never interrupted; provided there be the ir­repressible demand for his presence, he cannot, he will not deny himself to us. The first person to whom he showed him­self alive after the resur­rection was a weeping woman, who had no greater claim upon him than any simple penitent sinner.”