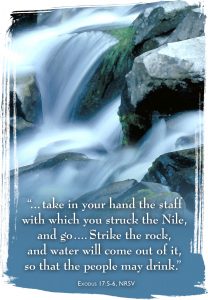 Have you ever been really thirsty? You can appreciate the need the people of Israel had in Exodus 17:1-7—though not how they dealt with that need.

Don’t test God! Do not try to make God fit your expectations. Notice in Exodus 15:22-27, how quickly the people began to grumble and complain. They had just witnessed the powerful displays of God in the plagues against Egypt, through which they had been delivered. The song of Exodus 15 was almost still echoing in their ears when they began to complain against Moses because of their thirst. The giving of manna is bracketed by complaints about thirst. In Exodus 17 it is not just grumbling, which is an expression of lack of trust, but a quarrel, almost a legal dispute, focusing on Moses, but on him as God’s representative. It is rebellion against God. It is ultimately a demand that God meet their expectations. That is a pattern of thinking into which we easily fall. “In the story of the faultfinding when the people ran short of water, it was not the Lord who put the people to the test. In fact, it was just the other way around. Israel was testing the Lord, saying: ‘Is the Lord in our midst or not?’ This challenge was to force the Lord to show His love in the way they saw fit. Such a challenge was born of unbelief, not faith.” (S. G. DeGraaf, Promise and Deliverance, Vol. 1, p. 288).

Testing God has consequences. Psalm 95 cites this testing, naming this geographic location, as bringing God’s anger against his people. The testing was ultimately rebellion against God, disobedience to him, a refusal to trust him. It, along with the other grumbling and doubting, culminated in the refusal to enter the promised land. So Israel spent 40 years in the desert until that generation had died. Hebrews 3 and 4 puts you and me, the church today, in the same place as Israel in the desert. We are wilderness people, a pilgrim people, on our way to the ultimate rest God has prepared for us.

Your Rock provides you with living water. God, stands on the rock. Even in the face of the quarrelsome rebellion God is gracious to his people. The Lord send Moses and the elders ahead to a rock, and says that he will stand on the rock. (The preposition could be translated by or on.) In any case, the Lord is identifying himself with the rock—it is not that he is just in the neighborhood. Rock is used in Deuteronomy 32 and the Psalms as an identifier for God, the Lord who accompanies and protects his people. He he stands. Notice the posture. It is not that of an enthroned king, though he is the King of Israel as well as the Lord of the universe. He stands as a servant would, ready to serve his master. You have an anticipation of what the Messiah would do as he washed the feet of his disciples.

He provides water for his people. At the Lord’s command, Moses strikes the rock with the same staff that had been wielded during the plagues of Egypt, the staff that had been held over the sea to part the waters. Abundant water pours from the rock, satisfying the thirst of God’s people. The gift of water is life-giving (as well as an instrument of judgment on occasion). It looks back to Eden, watered by four rivers, it is celebrated in the Psalms. A river of life-giving water flows from the temple in Ezekiel. The picture is completed in the New Testament, where Jesus offers living water to a Samaritan woman, and then in John 7 offers himself as the source of water.

Drink the water God gives. Christ is the Spiritual Rock who accompanies his people. This is not just one of several spectacular miracles. Rather, it, along with the giving of manna, is the Lord giving life to his people. Israel, united to their redeeming God, experiences salvation. “. . . the rock is. . . expressly called ‘Christ.’ What Israel was given to eat and to drink was not merely an incidental miraculous food and drink, but was taken up in the great context of the divine work of redemption in Christ.” (Herman Ridderbos, Paul: An Outline of His Theology, p. 420). Paul describes the Rock, identified as Christ in 1 Corinthians 10, and the bread and the drink all as Spiritual. He does not mean simply immaterial (the bread was chewed, the water drunk), but rather characterized by the Holy Spirit.

Continue to drink of Christ. Respond to the invitation/command of Jesus: “If anyone is thirsty, let him come to me and drink.” While coming to him has a beginning, it is something you continue to do. Come and feed upon his Word as it is proclaimed. Come also, and eat and drink as he comes to you in the Lord’s Supper.

Deeper than any physical thirst is your need for the water of life. What you need, your Spiritual Rock has provided. Drink of him.