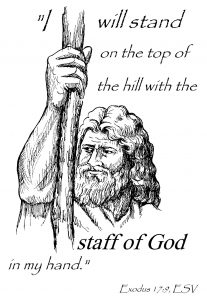 What can you do when the evil one stirs up persecution against the church? How do you handle it when the battle against your own sin seems to be faltering? Exodus 17:8-16 is more than just a snippet of Israelite history focusing on an obscure battle.

The battle is the Lord’s. The Amalekite attack was not just against Israel, but against the Lord himself. The people had just left Egypt, where they had been an enslaved nation. They were untrained for war. The Amalekites were a nomadic people, descendants of Esau, living to the south of the promised land. They attack from the rear, Deuteronomy 25:17-19. Their attack is a continuation of the plan of Pharaoh to destroy the Israelites. Moses has Joshua select men to fight, and sends them out to defend the people of Israel.

The prayer of Moses, lifting up his hands, gave victory to God’s people. Militarily, the untrained Israelites were no match for the Amalekites. But Moses, on the hill, lifted his staff, calling out to the Lord in prayer. As long as his hands were raised Israel prevailed. When they dropped in weariness, the Amalekites were winning. God was making clear to Israel what you and I need to know—it is not by our might, our strategy, our cunning that the victory comes. God’s people were utterly and obviously dependent on him.

The conflict between Amalek and God’s people continued. It is part of the conflict between the descendants of the serpent and the descendant of the woman. Amalek was not just an opportunistic plunderer, but rather an instrument of the evil one rebelling against the Lord and attacking his people. Note the judgment pronounced at the end of the chapter. This would continue as King Saul failed to obey God’s command to utterly destroy them. (Perhaps Saul was too impressed with his new role as king to remember the importance of obedience.) The command to exterminate the Amalekites is an anticipation in time of the judgment to come at the end of the age. The conflict surfaces again in Esther, as Haman, apparently a descendant of the Amalekite king, Agag, seeks to destroy Mordecai and his people, but fails dramatically.

Give thanks for your Intercessor. Moses needed help to pray. As Moses’ arms grew tired, Aaron and Hur held them up. God was giving the victory through the prayers of the appointed mediator—but it was clear that Moses was not adequate himself. Moses is the mediator, but he too is a sinner. He is frail. He is not sufficient himself.

Your high priest always lives to intercede for you. God is concerned enough about you that has given you a better Mediator, his own Son. Jesus, as the possessor of an endless life, is in heaven now, continuing his work as your great high priest by interceding for you, as Hebrews 7:24-25 reminds you. His death and resurrection did deal with the guilt of your sin. But he is also the victorious conqueror. This intercession for you is triumphant because of his completed suffering, his death, and his resurrection. “Because Israel was to be the Lord’s, because Israel’s hand was to be on the throne of the Lord, because Israel was to confess that its cause was the Lord’s cause, the war against Amalek would never end. If we are the Lord’s we must never call a halt to the fight against sin, the devil and all God’s enemies. If we make peace, we will lose the battle. Fortunately, the Lord Jesus Christ never relaxed in that struggle, but fought it to the very end. He is still waging war out of heaven. He will make sure that those who belong to Him wage this battle continually. And He will give them the victory, for He has conquered and He will always conquer.” (S. G. DeGraaf, Promise and Deliverance, Vol. 1, p. 293).

Lift your hands to the throne in prayer. Respond to the battle by worshiping your God. Identify the threats to your relationship with God. Sometimes the threat is open persecution. Revelation is written to suffering churches. It emphasizes that the prayers of God’s people are effective, Revelation 8:3-4. Satan, the great serpent, attacks God’s people, both through false teaching and open persecution. But some of Satan’s attacks are much more subtle than a murderous raid by a marauding army. Some of the most crucial battles between the kingdom of darkness and the kingdom of God’s Son take place in the hearts and minds of you, God’s people. We can be so focused on the enemy “out there,” that we fail to resist temptation in our own hearts. Whatever the need for which we are praying, in prayer we reach to the very throne of God. Count that a privilege!

Pray faithfully. In 1 Timothy 2 Paul is teaching Timothy how to equip the church to meet its challenges. He commands that we pray for those in authority. That is a timely reminder for us today—regardless of how we voted or what our political views are. The focus of the chapter is on public worship. Posture in prayer is not indifferent. It is not a goal in itself. Don’t let it become a mechanical way of seeking God’s favor. Even more important is the attitude of the heart. But the point is, be faithful in prayer.

Be self-conscious as you conclude your prayer with the familiar, “in Jesus’ name, Amen.” How do you know that in your prayer your hand is on the throne of God? Because the nail-pierced hand of your now exalted Mediator is at the right hand of that throne. He is interceding for you. So, pray boldly!