To Lead You to Christ 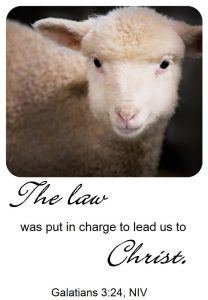 Did you have a bossy older brother or sister who ruled you while baby-sitting? That was the place of the Mosaic administration as Paul describes it in Galatians 3:23–25.

The law was put in charge of you. You were under the authority of a tutor. The law was your custodian. “Schoolmaster” misleads somewhat as a translation, since the primary emphasis is not education but custodianship. Other translations use “tutor,” or “guardian,” or “in charge.” Paul uses the word from which we get “pedagogue.” It referred to a slave who was entrusted with looking after and supervising a free-born child. “Babysitting!” Paul has the whole Mosaic economy in view. The law followed the patriarchs by 430 years, v. 17. It does not contradict the promise of the covenant with Abraham, v. 21. The law points out sin. It makes it obvious, vv. 19, 22 so that you see your need of Jesus Christ as Savior.

You had been held captive by the law. “The law” includes all ceremonial regulations. Those regulations “hemmed in,” or “locked up” God’s people. That subjection was temporary, v. 23. Be careful to note Paul’s language. To be “free from the law” can mean to be free from the bondage of sin. In Romans 6:14, to be under the law is to be under the dominion of sin. The law intensifies sin, Romans 7:9. As a Christian you are dead to the law, Romans 7:4. But as a Christian, there is a sense in which you are still under the law. Paul makes clear that he was not outside the law in 1 Corinthians 9:19–21. Note also the force of Romans 13:8–10; 1 Corinthians 6:9. Yet you are not under the law as it refers to the Mosaic ceremonies. If you want to know what they were, read Leviticus, and imagine what it would have been like to live with the burden of those details. God was teaching his people something profound about his holiness and the contaminating power of sin. Unlike Israel in the Old Testament, you are no longer under obligation to keep the ceremonial regulations God gave his people of that age. “As under the law,” 1 Corinthians 9:20 refers to conformity to Mosaic ceremonies. This usage sheds light on Galatians 3:24,25. “Law” here refers to the pedagogical custodianship of the Old Testament ceremonies. Rather, having come to know Christ, you no longer need the ceremonies which pointed to him. “It was fitting that, before the sun of righteousness had arisen, there should be no great and shinning revelation, no clear understanding. The Lord, therefore, so meted out the light of his Word to them that they still saw it afar off and darkly. . . . What did the Law and the Prophets teach to the men of their own time? They gave a foretaste of that wisdom which was one day to be clearly disclosed, and pointed to it twinkling afar off. But when Christ could be pointed to with the finger, the Kingdom of God was opened.” (John Calvin, Institutes of the Christian Religion, Book II, XI, 5). But then, what purpose did the law serve?

The law was given to lead you to Christ. The law points to Christ. The law addresses your need of a Savior, v. 22. Is salvation by law-works possible (as the Judaizers claimed)? No! The law tells you, and everyone, that you are a sinner. The only way to God is Abraham’s way, by faith in Christ. For him, as for all believing Israelites, it was trusting in a Savior to come. The custodianship or guardianship of the law points you to your Savior. The Mosaic ceremonies were burdensome, but they had a purpose. They reflected (in anticipation) aspects of the work of Christ, Hebrews 8:5. Now that the full reality of Christ’s work is present, the ceremonies are no longer needed. (The child has grown, and no longer needs a baby-sitter.) The goal of the ceremonies of the law was not to make you trust in them, but to lead you to Christ, to be declared just by faith in him. “In the old age, Torah was the epitome of divine revelation, but now its high position has been surpassed in the ‘new creation,’ which expresses the zenith of God’s revelation in Christ, a revelation only pointed to in the former age of Torah (see, e.g., Gal. 3:23–25). The ‘new creation’ is the other side of the coin of the crucifixion; Jesus’ crucifixion was inextricably linked to his resurrection, since the former was necessary for and led to the latter, which Paul understands elsewhere to be the new creation.” (G. K. Beale, A New Testament Biblical Theology, p. 309). Notice how the feasts of Deuteronomy 16 not only look back at the Exodus, but also ahead to their fulfillment in Christ. Focus on Christ as you read and study the Scriptures. Don’t let the message degenerate into interesting, uplifting stories or good moral lessons. Keep looking for the grace of God in Christ Jesus. “[T]he beauty of Jesus is without a flaw. That beauty cannot be appreciated without a knowledge of the holiness upon which it is based; and the holiness is unknown except to those who have been convicted of their own sin through leaning the lesson of the law.” (J. Gresham Machen, What Is Faith?, p.137).

You have become a son of God. You have a right to all the privileges of a member of God’s family. Contrast that with the burden of being under the tutor, v. 25. Paul is telling you not to live in a childish way, depending on the restrictive custodianship of the ceremonies. A contemporary parallel is setting up human rules in addition to God’s law, as though you cannot trust God’s people to live as mature children of God. Undoubtedly much that Hollywood produces is corrupt and corrupting. But the Word of God does not prohibit you from entering a movie theater to watch a movie that glorifies the Lord. You are God’s child by faith in Christ, v. 26. You are adopted in Christ, Romans 8:17; Galatians 4:4–6. You can claim to be God’s child only as you trust in Christ. Your status as a child of God implies a relationship of respect and obedience. Picture the relationship between father and son in the Middle East.

You are no longer under the restrictions that hemmed in God’s people in the Old Testament. Give thanks for that. Yet don’t mistake your freedom for license. Live as a child of God, bringing honor to him in all that you do.