The Truth Will Set You Free! 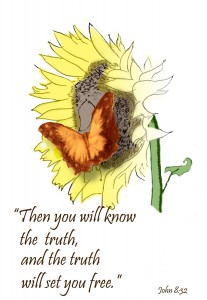 Jesus’ words, “The truth will set you free,” (John 8:31-32) are sometimes pulled out of context, used as a slogan, or even engraved on buildings on university campuses, where any connection with Jesus is considered politically incorrect! Truth, as it comes from the mouth of Jesus, is not an abstract concept.

John tells us that Jesus was addressing those who had believed on him. Yet, as the conversation progresses, it becomes clear that he considers his hearers, not children of Abraham as they claimed, but followers of their father, the devil. Apparently there are believers and there are believers. Many who had believed on him in some sense (as a provider of food or a great teacher) were unwilling to place their trust in him as the one who redeems from sin, perhaps because that would involve admitting to a problem that they were unwilling to face–their alienation from a holy God. Similarly today many have a one-sided view of Jesus. They want him to fall back on when life is difficult, but are much less enthusiastic about discipleship, following Jesus in daily life.

You need the truth to set you free because by nature you are a slave to sin. In response to the protest by the leaders of Israel that, as Abraham’s descendants, they had never been slaves, Jesus emphasizes that everyone who sins is a slave to sin. Sin has an addicting power. The more we engage in it, the harder it is to break. Think not only of grossly sinful habits, but also of sins like self-righteousness. How does Jesus show that his hearers, that though they are descendants of Abraham, they are not true children of Abraham? Abraham, the friend of God, the man of faith, the recipient of the promise, is one who “will direct his children and his household after him to keep the way of the Lord by doing what is right and just” Genesis 18:19. Rather than walking as Abraham did, Jesus’ hearers were plotting his death. Their actions show that they are carrying out the desires of their father, the devil, John 8:44.

No matter what the shape of your prison cell, what you need is the liberating power of the word of Jesus Christ. His word is not simply a body of knowledge. Ultimately he offers himself. Herman Ridderbos comments: “‘Truth’ here is not general or philosophical truth but the trustworthy knowledge of God that is realized in its fullness in the coming of Jesus Christ. . . . It is the truth that ‘came’ through Jesus Christ, that became flesh and blood in him (1:14, 17), that he therefore is (14:6).”

Today we may describe regular Bible reading and meditation as abiding in the word. As important as regular Scripture reading is, and it is a means of grace, that is not the focus of what Jesus says. Rather, he is calling you to continue to trust in him and to walk in faithful obedience. Remaining in him is resting in him, but rest in Jesus is an active rest. “Hold to my teaching,” is not a bad description of what it means to abide in Jesus’ word. It means doing what Abraham did, trusting the promises of God no matter how improbable they might seem. It means walking your daily life by faith. Abraham, who had left Ur for an unknown destination, was ultimately seeking the country to which you belong, the glory of the new heavens and earth.

Remaining, abiding, holding (however you translate it) involves the idea of perseverance. Keep on holding to the One who is the way, the truth, and the life. As you do, find yourself free indeed!