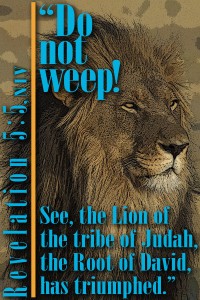 Sing because… Sing because God is God. The God who made you in his image speaks with you and listens when you speak. Appreciate the sovereign power of God. To a church suffering under persecution, faced with the claim that Caesar is Lord, Christ gives John (and you) a glimpse of the throne room of heaven. It is clear who sits on the throne. You need that reassurance as you face a world that is unfriendly to the gospel. Don’t get the impression that the church has suffered some massive defeat if bad laws and regulations are passed. The world around you may be in blatant rebellion against God, but he hears your cries. Creatures in the presence of God must worship.

Sing because God has redeemed you. The One seated on the throne holds a scroll, apparently containing his plan. The only one worthy to open it is the Lion of Judah–who is a Lamb that was slain. His taking the scroll is what triggers the songs of praise in our text. The prayers and songs of praise are the response to the speaking by God’s messengers. God’s people respond to redemption by singing, Exodus 15; 2 Samuel 6:5; Psalms; 1 Chronicles 25:1, 6–7; and Nehemiah 12:27–43 The speaking in Rev. 4-5 focuses on God’s work of redemption. The setting reminds of Sinai, at the heart of the great Old Testament picture of redemption. The scroll, written on the inside and the outside, contains God’s covenant promise, his outworking of what he has planned for his people, Daniel 12:4. Adam had been given dominion, but rebelled himself. The promise of dominion is thus given to the second Adam, Jesus Christ. Mankind have been given dominion and had forfeited it—thus a human person has to open the scroll. But only the Lion-Lamb can do so. The scene, drawn from Daniel 7 as well as other prophets, is a heavenly courtroom scene. Despite the suffering and seemingly chaotic situation on earth, the heavenly King has all in his control. “[I]n their struggle against the world, believers should remember that Christ also suffered at the hands of the world but triumphed over it. His destiny is to be theirs, if they persevere.” (G. K. Beale, The Book of Revelation, p. 353).

Sing to… Sing to the triune God. Worship is the response of creatures, even heavenly creatures, to the glory of the sovereign Creator, Isaiah 6. The four creatures (see Ezekiel 1) and the 24 elders sound praises at the end of Rev. 4. Our speaking back to God focuses first of all on him. Worship is praise directed to God. Though we benefit from it, its purpose is honoring his name. It must be more than setting the mood or stirring the emotions. The songs of Col. 3 and Eph. 5 build up one another. Singing in worship is corporate, not individualistic. Singing can be praise and adoration. It can be confession or intercession. It can even, like some of the Psalms, be Psalms of judgment, reflecting God’s wrath on his enemies (hear the cries, “how long”). But it may not be trite. It has to be reverent. It has to reflect the character of your God. Grow in learning to sing better. Use hymns in your family devotions. The hymns of Revelation 4 and the one in 5:13 specifically focus on or include the One who sits on the throne. The imagery is fluid as the Holy Spirit is described in 5:6 in fluid imagery, as the seven eyes of the Lamb. The Spirit who searches the hearts, the Spirit who is working sanctification in you, is connected with the triumphant Lamb.

Sing to the triumphant Lamb. Lion of Judah, the Root of David (Genesis 49:9; Isaiah 11:1) is announced—but John sees a Lamb that has been slain. Psalm 33:3; 149:1; Isaiah 42:10 and other passages speak of a new song. As God accomplishes new things in salvation, his people respond with a new song. The ultimate new thing in salvation has happened. The Lion-Lamb has come. He has died, but is alive. He has purchased men for God. And thus the heavenly choirs sing a new song, Revelation 5:9. “When every creature in heaven, on earth, under the earth, and in the sea joins the song, our perspective, which began in adoration of the thrice-holy God from eternity past (‘who was and is and is to come,’ 4:9), is expanded to embrace eternity future: may the enthroned One and the Lamb receive blessing, honor, glory, and dominion ‘forever and ever’—literally, ‘into the ages of the ages’ (5:13).” Dennis Johnson, Triumph of the Lamb, pp. 111–112). A new song is sung in heaven. But Revelation is written for you and me, for a suffering church on earth. Yet we learn from the singing of the heavenly worship, and we sing those songs in our broken world. Because we were purchased by the death and resurrection of the Lamb that was slain, because we are united to him, we sing in our suffering, looking forward in hope to the fullness of our salvation. Because he has redeemed, not just people from one country, but from every tribe and nation (fulfilling the covenantal promise to Abraham) the song expands. “Our understanding of heaven’s eter­nal worship as expressed in Revela­tion also informs our understanding of worship following the death and resur­rection of Christ, for ‘eternal’ worship must include the past, present, and future.” (Paul S. Jones, “Hymnody in a Post-Hymnody World,” in Give Praise to God: A Vision for Reforming Worship, p. 230). Grow in learning to sing better. Use hymns in your family devotions.

Because his redemption is not just snatching sinners from the fire, but also renewing and restoring them (notice that Revelation ends with a combined new heavens and earth), the song of praise arises from every creature in every corner of creation. If you sing this new song from your heart, you can’t compartmentalize your life. Everything you do needs to be an underlying affirmation of what your voice has sung.