The Triumphal Entry from a Post-Resurrection Perspective 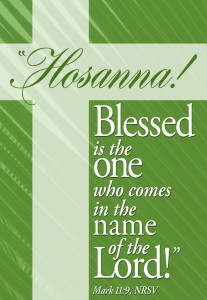 John 12:12-19 is John’s description of the Triumphal Entry of Jesus into Jerusalem. John presents his eyewitness account, but emphasizes how a historical perspective gave him insight into the significance of the events. That perspective is crucial if you are to understand how you relate to Jesus.

“The next day” puts us in the middle of a story. In John 11 Jesus had raised Lazarus from the dead, the last of the signs of Jesus before John records his suffering and death. This was a great sign and attracted the curiosity, awe, and even faith (John 11:45) of many. It also increased the hatred of the chief priests and Pharisees, prompting an ironically accurate prophecy by the chief priest, John 11:49-52. Jesus had withdrawn to a desert area.

Now Jesus had returned to the area around Jerusalem, yes to attend a dinner at Bethany (where you see Mary anointing him for his death), but for the larger purpose of going to the Passover Feast. He uses the means of grace, and here he is to be the Lamb of God that takes away the sin of the world.

The crowds (Jerusalem’s population swelled at time of Passover) come out to welcome the approaching Jesus. A crowd had gone out to Bethany to see Jesus and Lazarus whom he had raised. They take palm branches, a symbol of national victory at least since the time of the Maccabees and used on Jewish coins 100 years after this entry, and wave them.

The crowd picks up the language of the messianic Psalm 118. “Hosanna!” literally “save now” had become a cry of praise. The blessing on the one coming in the name of the Lord refers to the messianic deliverer. And, lest anyone miss their point, they add words not found in the Psalm, Blessed is the King of Israel!”

Jesus’ time has now come. Jesus had told Mary in John 2, “My time has not yet come.” In John 5:15 Jesus withdrew because the people wanted to make him king by force. In John 7:1 and 11:54 he has acted to avoid a premature confrontation with the leaders of Israel. But now he accepts the cries of the crowd. He takes part in the procession. He even finds a mount to ride.

The young donkey (not only humility, also used by judges as they had made rounds in Israel) and the related passages of Scripture speak volumes about how he views his kingship. Zechariah 9:9: righteous, having salvation, gentle, on a donkey; Gen. 49:10-12: scepter, ruler’s staff, donkey to vine, washing garments in wine; “Do not be afraid”: Isaiah 40:9.

Herman Ridderbos writes: “No one in Jerusalem but Jesus–neither his disciples nor the crowd nor the rulers of Israel–understood that he entered Jerusalem, sitting on a donkey, to receive that kingship and, as the Son of Man, to be lifted up on the cross. For that reason the story of the entry, particularly in John’s presentation of it, is the story of Jesus’ hidden glory, the deep meaning of which only the progress of the events of salvation would disclose.” (The Gospel of John: A Theological Commentary, p. 424). What Jesus means by accepting the accolades and riding the donkey in this procession and what others see are not the same. The crowds may think that his time has come to rally the people and set them free from Rome. But you can’t put this Jesus into a box. Were he to come down today and speak to the conservatives and to the liberals and to those between, all would find him disturbing. Does it trouble you that so many in this huge crowd can be shouting “Hosanna!” on Sunday, and “Crucify him!” on the next Friday? That shows you the depth of sinfulness in the human heart.

You can try to mold him to your expectations. The crowds see the miracle worker, now willing to be called King, entering Jerusalem, ruled by the hated Roman invaders. They call him “the King of Israel,” and expect him to meet their expectations of what the Messiah will do. But their “faith” demands that Jesus meet their expectations. Do you seek a Jesus who will meet your preferences, who will comfortably suit your agenda? You will be disappointed, feel hurt and betrayed if he doesn’t do what you expect, and you may well betray him. Many in the crowd may have been in crowd which on Thursday of the same week shouted, “Crucify him!”

You can reject him outright. You may decide from the start that you and Jesus are not on the same page, that you cannot get along, that you are unwilling to give up anything in your life for him. Are we ever at least partial Pharisees, choosing areas of our life over which we try to deny him sovereignty? The Pharisees (v. 19) exclaimed: “This is getting us nowhere. The whole world has gone after him.” Notice the ironic folly of their position. They were jealous because of the followers when Lazarus was raised, John 11:45-50. They decide the solution is to kill not only Jesus, but Lazarus as well! John 12:10-11. Their plots do lead to the death of Jesus, but as John makes clear, that is not the end of the story! Note the irony of “The world has gone after him!” God is using the Pharisees to underscore a central point of this Gospel. Jesus is Savior of the world. (And the story continues with Greeks coming to Jesus.) You don’t want this King on a donkey as your enemy!

You can and must view his kingship from the conclusion of his work. As the other Gospels indicate, the disciples had assisted in obtaining the colt and preparing it for the Master’s use. But, John admits, they had done so in ignorance at the time. It was only after the resurrection and glorification of Jesus that they understood the significance of the events that day.

Yes, Jesus was the King, but he was mounted appropriately on a humble donkey because his kingdom would come, not through doing battle with the Romans, but by the suffering and death of the King. The road to the throne may lead into Jerusalem, but it leads out again to Golgotha before he ascends to it. Jesus enters the city to die, but then to rise, to ascend to glory, and to pour out his Spirit on the church. Then they and you can understand.

Look at this incident from the end of the story. Then the pieces fit together. Then you understand what to do with a king on a donkey! Look at him in Rev. 19:11-16 (written by the same author as this Gospel). See his majesty! His royal power was good news to a persecuted, suffering church and continues to be comfort for Christians as they struggle.

Look at him through the viewpoint of what he came to do. Then trust him (these are written so that you might believe!). Serve him. You cannot be neutral about him. And praise him! Revelation 7:8-10, which includes palm branches. But go home, not with a palm branch, but with the Lord Jesus himself as your king and Lord. Rest in his protection. Question and Answer 75 of The First Catechism reads: “Why do you need Christ as your king? Because I am weak and helpless.” What is the fear that nags at you? What is the temptation you face? What is the biggest discouragement you have today? What are the doubts you struggle with? Because your King rode into Jerusalem on a donkey you can take them to him with the assurance that he hears and that he is powerful enough to protect you.

How do you see this King on a donkey? What do you do with him?