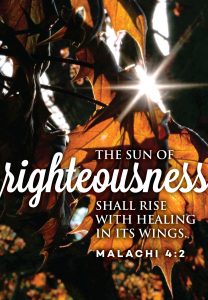 The day is coming. God’s judgment will consume his foes. The background is the seeming lack of difference between the lot of the righteous and that of the wicked, Malachi 3:14–18. It has seemed that God has forgotten, that there is no sign of coming judgment. That is a fatal mistake! 2 Peter 3:3–5. Paul keeps reminding us to live in view of the coming judgment. Warnings in both books are addressed to believers. We need to remember that judgment is coming. We need to be shaken out of complacency. The day that burns is coming! This is more than the refining fire of Malachi 3:2,3. This is a fire of destruction and judgment. The day of the Lord is one of fire, Joel 2:1–3. The wicked will be completely burned. Malachi strikes at the heart of the hypocritical pride of the nation of his day. Those destroyed are the proud and wicked. The destruction is complete–the burn like stubble, root and branch. This fire includes specific acts of judgment (such as the destruction of Jerusalem in 70 A.D.) and other events, up to the great final day of judgment. “Nor, again, have we any right to exclude the whole period from the destruction of Jerusalem till the last judgment, as if in the great book of history only the first and last leaf were written with the finger of God, and the rest left vacant.” (E. W. Hengstenberg, Christology of the Old Testament, on Malachi 4:1). As we worship on this Lord’s Day near the end of 2018, remember that we are one year closer to the day when the Lord’s judgment will fall on the earth. Notice how v. 1 begins, “Surely the day is coming. . . .”

You share in God’s triumph. You tread down the wicked. God’s triumphs in history are on behalf of his people. The church is victorious (the picture of Matthew 16:18 is that of the church in an offensive, not defensive posture). This is the fulfillment of the petition, “Your kingdom come.” Yet this triumph is one that is achieved, not in spite of suffering, but through suffering. Although the arrogant and evildoers will ultimately be judged, they appear to triumph for a time. Malachi wrote for people who were facing a time of suffering (read Daniel’s prophecies about Antiochus Ephiphanes). This assurance of triumph comes to you as you face stress in your home, challenges to your health, hurdles in your job. You live in the tension of a victory which has been accomplished, but is not yet fully revealed in your life. You have hope, and even joy in suffering, because the Lord of hosts does this. God is the one who acts. The battle and the victory are his. Throughout he is identified as the Lord of hosts–the sovereign, conquering, faithful God of his people. Though you struggle against sin, there is no sin that is more powerful than your Lord. Though your habits may be slow to break, you have the Lord who commands the hosts of heaven and earth as your deliverer. Geerhardus Vos notes (The Eschatology of the Old Testament, p. 162) regarding Malachi: “The judgment aspect of Jehovah’s advent—the coming is condensed into the one ‘day’ par excellence and this one day assumed the character of a veritable dies irae (‘day of wrath’) (3:2; 4:1). . . . Side by side with this retributory aspect, the judgment assumes the form of a process of purification resembling the method whereby silver and gold are extracted from the dross adhering to them.” Because he does provide what you need, he warns of his curse on those who refuse to restore relationships, v. 6. You are coming one year closer to the glory of the new heavens and earth–to the blinding glory of the direct presence of God. The metaphor of fire changes as Malachi describes the salvation that God has for his own.

The sun rises. The sun will rise for you. The sun is righteous. Note that it is “sun,” not “son.” Malachi uses an abstract noun–the sun is righteousness. “Wings” seems to refer to rays. The sun was used in the ancient near east as a witness to great events. Here the witness is also the one bringing deliverance. This sun rises on those who fear God. This sun is none less than the Messiah of 3:1–3, the messenger of the covenant, who is the Lord himself, coming to his temple. His coming is sunrise after a dark night. There is a difference between God’s people an others, see Malachi 3:16. The Lord is still the judge, but here he is vindicating his own. To his oppressed people, there is healing in those wings. The Lord assures you that the sun rises for you. The comfort is addressed to you as you struggle against sin, as you deal with the effects of the curse. The coming of the Lord means joy and assurance of victory for you.

Rejoice in the salvation the Lord brings. Those that fear God’s name never fail. You will prosper in the salvation the Lord brings. “Malachi shows that despite God’s mercy in choosing Israel over Edom (1:1–5), Israel’s response to exhortations to faithfulness has been negative. . . . If Israel will repent of its many sins, God will bless the people again in the future (3:5–18). Judgment is coming, but the faithful will be spared (4:16).” G. K Beale, A New Testament Biblical Theology, p. 85). You take part in the triumph the Lord provides. He is the one who acts, but he acts on behalf of his people. You will skip like calves. Picture a calf frisking in the sunlight after a night pent up in a shed or barn. That describes the relief and exuberance of God’s people, rejoicing in his triumph. That joy should be the underlying characteristic of your life. It doesn’t deny the challenges and even grief you face, but beneath all that is the foundation of what God is doing for you. That joy comes to expression in peace (replacing worry). It shows itself in grace shown to those around you, replacing sharpness and harshness. How can your family, your co-workers, your neighbors see that joy in your life? What Malachi looked forward to, you have experienced. Life cannot be the same, for the sun of righteousness has risen! Face this season and the year before you in the presence of the One who is the light of the world.

As you go through this week, rejoice in the coming of the sun of righteousness, the light of the world. Each day look for at least one way for the joy of his presence to color a conversation or to illuminate a relationship.