The Promise of the Incarnation 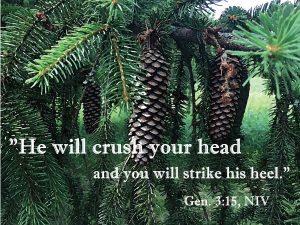 This season can be the favorite time of year—or it can be incredibly difficult, especially for those suffering from illness or dealing with grief. Look with me at the very first promise of the incarnation (God becoming man) as it is found near the beginning of the Bible in Genesis 3:14-15, and notice the challenging circumstances in which that promise was given.

God gave his promise in the context of a curse. You need God’s promise because you stand guilty before him. God questioned Adam and Eve. They had a sense of their guilt, vv. 7,10. God, as the righteous judge, was questioning them, not because he needed information, but to bring them to see their guilt. The question of v. 11 focuses on God’s command, and gives opportunity for clear confession and repentance. With your first parents, you are guilty. Adam was your representative. You are involved in his guilt, but you also have added to his guilt placed on your account, you are liable for all of the daily sins you commit. You and I stand with Adam and Eve.

God pronounced curses because of sin. The serpent was cursed above all animals. The curse did mean that the snake would not be above or better than any other animals. It would be the object of degradation and hatred. Yet, even the curse on creation, vv. 17-19, shows that there is something drastically wrong with creation, see Romans 8:20-22. This curse contains a measure of common grace. It helps keep the world from being as bad as it can be. The ultimate object of the curse was Satan. He is the one cursed directly (Eve and Adam are affected by curses, but are not cursed directly). The curse relates to and affects Adam and Eve and all of their sons and daughters. The grief, pain, suffering, loss, and frustration we experience is the result of the curse. It strikes all of us, young and old, alike. When you see the effects of the curse, appreciate more clearly the need for the Savior. Understand how cosmic his work truly is.

God promised the woman a victorious offspring. God placed enmity between the woman’s seed and the serpent’s seed. God takes the initiative. He doesn’t leave us in the middle of the problem of our sin. He doesn’t just stir up enmity, he establishes it. In the context of the curse, God provides a promise. Eve may have anticipated that the son she would soon bear would be the snake crusher. But it would be thousands of years later when a Son would be born to a young virgin, a Son who would be the child of Mary but also the Son of God. His moment of victory, his crushing the head of the serpent, would come, ironically, as he was being crucified. That is the striking of the heel, for though it meant the death of the Messiah, the grave could not hold him. He rose triumphantly. It is when you are most aware of your helplessness, your frailty, and above all, your sin, that you see most clearly your need of a deliverer. The promise of the incarnation is part of an ongoing conflict. The woman will have a descendant, and God will place enmity between him and Satan. The rest of Scripture describes that conflict. It is there in Egypt when the infant boys are thrown into the Nile, it is there when David is tempted and sins, when Judah is led into captivity, and when Herod strikes out at the babies of Bethlehem. Understand that everything you do happens in the context of this conflict. It either advances the kingdom of the Seed of the woman, or it contributes to the darkness of the seed of the serpent.

Trust the seed of the woman, who has overcome. This is the promise of victory for mankind in Christ. In Revelation 19 the victory portion of that promise is described. “Christ has promised to judge the wicked in order to vindicate his name and his followers, and he will be ‘faithful and true’ in fulfilling this promise.” (G. K. Beale, The Book of Revelation, NIGTC, p. 950). The Seed (Offspring) of the woman will crush the serpent’s head (though in so doing his heel will be wounded). The reference is to Christ’s crucifixion, a seeming defeat for him, but ultimately the event which decisively overcomes Satan. The victory is not for Christ alone, but for all whom he represents. In promising that Seed, the Lord was inviting Eve, Adam, and you to trust the One who would crush Satan’s head. He gives hope to all who depend on him. The God who did not abandon Adam and Eve is the God who will never desert you, no matter how discouraging your situation, if you stand before him represented by his Son. That hope-giving promise of Genesis 3:15 has blossomed into fulfillment in the birth of the Savior. The anticipation of victory has melted into his death in our place and the triumphant glory of his resurrection. The hope of his first coming has moved into the certain anticipation of his return in glory. “Did Luther go too far when he said, ‘This text [Gen. 3:15] embraces and contains within itself everything noble and glori­ous that is to be found any­where else in the Scrip­tures’? Per­haps he did; it is a strong state­ment, pos­sibly an ex­treme one, but it points to the truth that the heart of the Biblical mes­sage is found in this verse. And the heart of that mes­sage is re­demption.” (Edward J. Young, Genesis 3, p. 106). The entire history of mankind from beginning to end is focused in this promise of the incarnation.

The question of which traditions you use to celebrate the incarnation is relatively unimportant. After all, the Bible does not command us to observe a particular day to remember the wonder of the incarnation and birth of Christ. Even how you feel is of secondary importance. What is vital is what God promised so long ago–and has brought to fulfillment–the giving of his Son to gain forgiveness, reconciliation with God, and victory over the forces of darkness, all for you who trust him. God offers him as the one in whom you can put your hope today!