The Peace of the Risen Lord 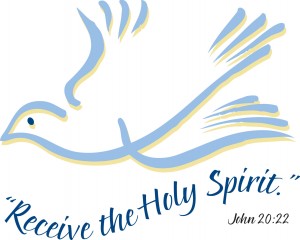 Jesus greets his disciples with “Peace be with you.” That was the common, expected greeting of the day–but it is not just an empty greeting. As the disciples think back over the past few days, they may well have expected words of rebuke from Jesus. Instead he greets them, and after showing them his hands and side, repeats the greeting. Jesus can greet his disciples with peace, because he has just offered himself as the sacrifice to satisfy his Father’s justice. The resurrection is the indication that the Father’s wrath has been propitiated. The sacrifice has been accepted. All that was required has been accomplished. Your salvation is complete, and God is at peace with you! You have received the Lord’s peace!

After satisfying the disciples that it is really he, Jesus breathes a deep breath. (“On them” is an addition to make the English flow more smoothly.) The word is the same as that used in Genesis 2:7 and Ezekiel 37:9. Both passages are in view as John writes. With that breath he gives the Holy Spirit. This is not a particular gift or talent of the Spirit, but the Spirit himself. Don’t contrast this with Pentecost, but rather see the connection between the resurrection and the gift of the Spirit. This is that to which Jesus’ teaching to Nicodemus in John 3 and the cry of Jesus at the feast in John 7:37-39 both pointed. This is an anticipation of what came more fully at Pentecost. The Spirit is essential for your life in Christ’s peace. Having received that Spirit, go out in Christ’s peace. The Son was sent by the Father to do his Father’s will. He has carried out that task, and is about to return to the right hand of the Father. Now he sends you out to do his work. (The verbs of sending are different, but the variety is probably just stylistic.) The work of the risen Lord, after he ascends to heaven, is to be carried out by his body on earth. It is not only the apostles who are sent, but the whole church has the responsibility of obeying the Lord. Beale writes concerning this breathing by Jesus, “Just as God’s breathing into Adam made him alive and a part of the first creation, so Jesus’ breathing into the disciples the Spirit might well be considered an act of incorporating them into a stage of new creation, which Jesus had inaugurated already by his resurrection. As such beings of the new age, they are to announce the life-giving forgiveness that can come only from Christ (John 20:23), the center and foundation of the new creation.” (G. K. Beale, A New Testament Biblical Theology, p. 572).

Go with the message of forgiveness. This is not a special authority given to priests or ministers to forgive sins (though it has sometimes been cited in support of that). No individual has the authority ultimately to condemn or forgive another. God alone can forgive. Rather, given the tense of the verb, it could be translated, “they have already been forgiven,” and “they have not been forgiven.” As you are faithful in living in the power of the Holy Spirit, as the church is faithful in proclaiming the gospel, the message of forgiveness (and condemnation) which it contains is carried out in actuality. Those who respond in faith to the risen Lord, those who trust him and live in covenant fellowship with him, experience his peace. Those who reject his peace on earth will find that their sins have not been forgiven in heaven.

“If [the disciples] believed, they could also be sent out. For this mission Christ gave them His Holy Spirit, the Spirit by which they would bring the Word of God into the world. By that Word they would forgive or not forgive sins. The sins of everyone who believed in that Word would be forgiven. The church is now the bearer of that Word. Itself created by that Word and subjected to it, the church by that Word must now also forgive sins.” (S. G. De Graaf, Promise and Deliverance, Vol 4, p. 109).

Because the peace of the risen Lord rests upon you, because he has breathed his Holy Spirit upon you, go about your work this week, not to serve yourself, but to live to his glory.