The One You Pierced! 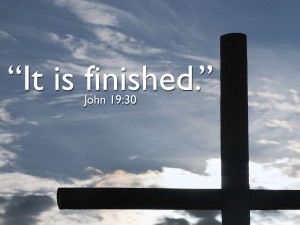 John gives his eyewitness account of Christ’s sufferings and death. But remember that the Gospel was written after the passage sufficient time for reflection, in the light of the Old Testament, on the meaning of Christ’s redemptive work. In John 19:28-37 the Apostle focuses on a particular incident, which he sees as important to your trust in Christ.

Jesus fulfills Scripture as he lays down his life. In his hours of hanging on the cross he has endured not only the physical agony of the crucifixion, but has endured the Father turning from him. In that time, as Paul puts it, he who knew no sin became sin for us. That work has now been completed, as John 19:28 indicates, except for the actual death of Jesus.

Having finished his suffering, he lays down his life. The “I am thirsty,” was likely whispered. The sip of wine vinegar, though it may have burned his parched mouth, enabled his triumphant cry, “It is finished!” The suffering of Christ is unique, unrepeatable. Atonement has been accomplished. Jesus does not die as a martyr, as a passive victim. Rather, he lays down his life as he had indicated he would in John 10:17-18. Jesus bowed his head and gave up his spirit. As the God-man he, according to his human nature, entered that temporary separation of body and soul that is the effect of death, the curse on sin. Yes, Jesus identifies so much with you that he endures that as well for you.

In all of this Jesus was fulfilling Scripture. Even the whispered, “I am thirsty,” is taken from Psalm 22, which so richly describes ahead of time the suffering, not only of David, but of David’s greater Son. The fulfilling Scripture is not so much Jesus thinking something like, oh yes, there is one more saying I have to utter. Rather, it means that he totally enters into the suffering of his people and bears that along with their guilt.

You see Scripture fulfilled also in the fact that, unlike the thieves, his bones were not broken. In powerful display of legalism working itself out, the leaders of Israel, on the basis of Deuteronomy 21:22-23, request that the legs of those being crucified be broken so that they die before sunset and can be removed from their crosses. They were scrupulous about not allowing a body of an executed criminal to hang on the cross over the Sabbath–but did not hesitate to plot and carry out the execution of Jesus during the Passover celebration. The soldiers carry out that task on the two thieves, but not on Jesus, since they find that he has already died. John again points to Scripture being fulfilled. The death of the lamb provided salvation for Israel. Exodus 12:46 and Numbers 9:12 emphasize that bones were not broken. The blood of the lamb provided safety for God’s people. John is echoing the identifying cry of John the Baptist, John 1:29. John refers to this sparing of Jesus as a fulfillment of Psalm 34:20. Initially it may seem strange to refer this Psalm to Christ, but God did hear the prayer of his Son, and answered it, not by removing him from the cross, but by preserving him and by raising him on the third day.

John calls you to look on the One you pierced! The leaders made their request to Pilate, and he sent soldiers to break the legs of the criminals to hasten their death. That was not needed in the case of Jesus, for he had already died. But the soldiers had to make sure of his death. The spear thrust resulted in blood and water flowing out. John (an eyewitness of the crucifixion, vv. 26, 35) certifies what he had seen. Theories that Jesus had not really died are false. John sees this seemingly small detail as important to your faith.

Don’t read more into this than John writes. Some speculate that the water represents baptism and the blood the Lord’s Supper. But the case would be stronger if that identification could be shown from what John says and from the early church. It is probably enough to recognize that in his Gospel John speaks of blood (John 6:53-56) and water (John 3:5;4:10,11; 7:38) as the source of life. John is telling you that life comes from the death of the Son of God. Similarly, be cautious about speculating on the exact medical cause of Christ’s death (Dr. William Stroud in 1847 argued that Christ died literally of a broken heart). John is not giving a medical examiner’s report.

Instead, John confronts you with the question: Have you seen the one you pierced? The quote from Zechariah 12:10 was difficult for Old Testament Jews to understand. How could the Lord talk of being pierced? The context is one of mourning and repentance. Yet there seems to be an emphasis on looking to the Lord in trust, see Numbers 21:9; John 3:14,15. The meaning of this difficult prophecy must have dawned on John as he reflected on his Savior’s death. Only as God became man and humbled himself could he be subjected to being pierced. Only as he was pierced in death could he be the Savior in whom you can trust.

Who pierced him? The soldier who thrust the spear into his side? Pilate, who sentenced him? The Sanhedrin who judged him guilty? Judas, who betrayed him? Yes, all of the above, but ultimately you pierced him. Christ was pierced for the sins of all his people, all who trust in him. Do you see Jesus as pierced for you? Do you trust him as the one pierced by your sins?

There is also judgment involved. The mourning of Zechariah 12 involves remorse over the treatment of the Lord. In Revelation 1:7 Jesus reveals himself in glory and power, also to those who pierced him. The judgment that came in 70 A.D. on the city of those who pierced him is just a foretaste of the wrath of a holy God on those who have rejected his ultimate revelation in his Son. Ultimately every man, woman, boy, and girl has to deal with Jesus as the one pierced. Either you mourn because of your sins and look to him as the One pierced for you, or you will one day mourn because of his wrath.

John’s primary focus here is not on judgment, but on salvation. Zechariah 13:1 makes that clear. That is why John emphasizes that he witnessed this detail. As Ridderbos points out: “From now on, because of Jesus’ self-offering in death, he is the one whom no one seeking salvation can bypass. In the one who was pierced (Zechariah 12) God places everyone before the great decision, just as that occurs in the man of sorrows of Isaiah 53 (cf. Jn. 12:38) and in the Son of man who had to be lifted up on the cross as Moses lifted up the serpent in the wilderness (Jn. 3:14).” (The Gospel of John: A Theological Commentary, p. 614). You will see the one you pierced. As John writes his Gospel, he describes the piercing as the final indignity at hostile hands which the body of Jesus would suffer. Tender hands would remove him from the cross and bury him. In that pierced body, Jesus would rise! John knows that in the next chapter he will be writing about Jesus inviting doubting Thomas to touch that scar left by the spear.

No, you have not seen with your eyes the scar from the spear. But as you read John’s Gospel you see the one you pierced. How do you respond?