The New Heavens and New Earth 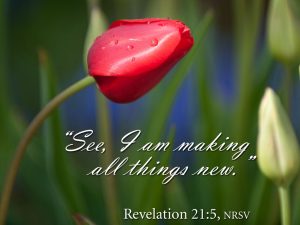 See the new Jerusalem! The new heaven and earth are real places. Revelation 21:1–8, though part of the final two chapters, is also part of bridge between the glory of the new Jerusalem and the account of God’s judgment. The last part of Revelation 20 focuses on the last judgment (with mention that those whose names are written in the book of life, are not punished), and our text focuses on them (with mention of judgment for hypocritical rebels). The passage uses lots of figurative language, but the symbols describe something real. The symbolism is needed because our minds and imaginations, clouded by sin, cannot fully comprehend what God has in store for us. There have been theories in parts of Christianity that the heavens and earth will be annihilated and brand new ones created. But God pronounced his creation “very good,” hardly pointing to simply a temporary purpose for it. Isaiah 60 speaks of the renewal, the re-creation of the heavens and earth—though describing it in language suited for his Old Testament hearers. In Romans 8 and 1 Corinthians 15 Paul draws a parallel between our resurrection and the renewal of creation. Your resurrection body will certainly be changed (1 Thessalonians 4), but you will be raised and changed. Similarly the creation will be perfected, as we shall see, purged from sin and its effects, but it is God’s good creation in which you will dwell in the new heavens and earth. “‘All thy works shall praise thy Name, in earth and sky and sea.’ To sing that line from this well-known hymn is to confess that the present praise of creation is not merely pre-eschatological, destined in the end for the silence of eternal extinction. The present creation awaits the eschatological voice it will receive when, free at last from its ‘bondage to corruption,’ it will ‘obtain the freedom of the glory of the sons of God.’ With this obtaining together with the sons of God, creation’s praise— beyond all sighing and in a manner beyond present comprehension— will heighten their enjoyment of that freedom and glory in the new creation of God. (Richard B. Gaffin, Jr., “What ‘Symphony of Sighs’” in Redeeming the Life of the Mind, pp. 160-161). An obedient Adam, if you can talk carefully about what would have happened, was not to continue for all eternity in the Garden, continuing to guard against the temptations of Satan. After his period of testing, the fruit of the Tree of Life (from which as a fallen creature he was barred) would have been his to eat. He would have moved on to far greater glory. And, the creation, instead of being cursed by his fall, would have moved on to something even better as well. Now that has been realized, but only because the second Adam has done what the first did not do.

The people of God are the holy city. Don’t get so caught up in the details of the symbolism that you miss a basic point. The new heavens and earth are for the people of God, those whose names are in the Lamb’s book of life. They are described as the holy city, the new Jerusalem. The gaudy wealth of Babylon in its rebellion against God is contrasted with the magnificence of the holy city. We’ll look next week at the more detailed description of the city to follow. Focus here on the fact that what was symbolized by the tabernacle (God’s tent in the midst of the camp of his people) and more clearly in Jerusalem, the place where God had caused his name to dwell in the midst of his people in the promised land, has now become a reality. Showing the closeness of the relationship between God and his people, the city is described as a bride prepared for her husband. Babylon was pictured as a harlot. Here you have the bride, not only beautifully dress for her husband, but redeemed and perfected by his work. He won his bride by giving his own life for her.

God will be with you. A loud voice comes from the throne — you remember who is seated on the throne — focusing your attention on the very heart of the glory you are seeing. God himself tells you what this vision means. He dwells with his people. What old Jerusalem picture imperfectly, has become a permanent reality. God dwells among his people. His voice goes on to reaffirm the heart of the covenant relationship that was expressed repeatedly throughout the Old Testament and into the New: they will be his people, and God will be with them and will be their God. That lay at the heart of the grace shown to our first parents after the fall, and to Noah, as the earth passed through a preliminary judgment and cleansing. It becomes much more explicit in the covenant as God makes it with Abraham, and then with Israel through Moses, and again, with David. It becomes even clearer in the New Testament with the coming of Immanuel. Because the holy God is present with his people, and because they have been both forgiven and fully sanctified, the new heavens and earth have no more curse. Gone also are the effects of the curse. There is no suffering. Were there any tears, God would wipe them from their eyes. There is not death, mourning or pain. The old order is gone. The new has come. “According to Scripture the present world will neither continue forever nor will it be destroyed and replaced by a totally new one. Instead it will be cleansed of sin and re-created reborn, renewed, made whole. While the kingdom of God is first planted spiritually in human hearts, the future blessedness is not to be spiritualized. Biblical hope, rooted in incarnation and resurrection, is creational, this-worldly, visible, physical, bodily hope.” (Herman Bavinck, Reformed Dogmatics, Vol. 4, p. 715).

Beware of being excluded. Sin—and sinners are excluded. Even in this description of blessedness, there is a note of warning. The blessedness of the curse-free heavens and earth can exist only because there is no sin. And just as the description of the final judgment in Revelation 20 mentions those whose names are written in the book of life, so here, amid describing their blessedness, John reminds you that excluded from this blessedness are sinners, rebels against God, verse 8. They face the judgment of fiery lake, the second death. John is warning you not to presume (as so many in our culture do) that you can ignore God, reject his Son, live in rebellion—and expect the blessedness of the new heavens a earth.

Here the church is finally purified of hypocrisy. In describing these particular sins — and sinners — John may well be more specific than simply speaking of all the ungodly. The phrase, “he who overcomes” takes you back to the letters to the seven churches in Revelation 2 and 3. Where there are warnings and condemnations there, they are directed, not primarily at the ungodly world around the churches, but rather at those within the bounds of the church who are caving in to compromise. Christ condemns those who, from within, are leading his people astray. This list of sins, culminating with lying, may well have those people in mind. The church here on earth cannot read hearts, it can only hear professions of faith and observe fruit (or its lack) in the lives of people. John seems to be warning that there will be no place for hypocrisy in the new earth. At this point, and not before, the church will be perfectly visible. Only God’s true people will be part of it. Men may be deceived. Hypocrites may even deceive themselves. But God sees the heart and judges justly. But that judgment is not the primary focus of our text.

Inherit all this! Listen to the invitation of the Alpha and Omega. As John hears the voice of God the Father in Revelation 1:8, he hears that description. It is renewed here, near the end of the book. Alpha and Omega, first and last, God is claiming to be all in all. Here is the fulfillment of what Paul in 1 Corinthians 15:28 tells you of Christ’s work. The Father here offers the water of life. Wait for Revelation 22 for a more full description of that water. Just remember that it is what God offered in Isaiah 55. It is what Jesus spoke of to the Samaritan woman in John 4. It is the Lord’s own cry in John 7:37–39. Are you discouraged? Is your soul thirsty? God himself invites you to drink freely of his Son, the living water.

As you drink, overcome and inherit as God’s child. Remember what comes near the end of each of the messages to the seven churches? God promises his blessing, the blessing of his presence, described in various ways that anticipate what lay ahead in the book, to the one who overcomes. The overcoming is not a military battle. It is entrusting yourself to the faithful Savior and remaining committed to him, despite the trials, temptations, suffering, and persecution that characterizes your life here on earth. Now the old order has come to an end, and as an overcomer, your inheritance is in the new heavens and earth. “[A]ll who overcome the dragon, the beasts, and the harlot through humble, persevering faith are heirs of everything. The homestead they inherit is not the first heaven and earth, sin-stained and curse-infected, but the new heaven and earth in which every impurity, pain, and sorrow has ceased to be.” (Dennis E. Johnson, Triumph of the Lamb, p. 307). But what you inherit is not just relief from tears and mourning. It is not just streets of gold. What you inherit is God himself. He is your God, and you are his child. Adam rebelled against his Father and lost Eden, not just for himself, but for you and all mankind. But God through his only Son, has undone the curse. The Lamb was slain so that your robes could be washed white in his blood. Now God is your Father, and you are his son, you are his daughter.