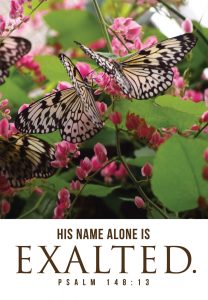 “What’s in a name? that which we call a rose / By any other name would smell as sweet;” Juliet asked Romeo. Was his being a Montague and not a Capulet a barrier to their young love? Regardless of how significant or insignificant your name is, the name of God is exceedingly important, as he points out in Exodus 20:7.

Do not use God’s name lightly. Don’t misuse name which the Lord gave to reveal himself. God’s name is vitally important, for he, the God who creates and names, gives his name to his people so that they may know him, trust him, love and worship him, and serve him. The name JHWH was revealed to Moses in Exodus 3. “There is an intimate link between God and his name. According to Scripture, this link is not accidental or arbitrary but forged by God himself. We do not name God; he names himself. In the foreground here is is the name as a revelation on the part of God, in an active and objective sense, as revealed name. In this case God’s name is identical with attributes or perfections he exhibits in and to the world. . . .” (Herman Bavinck, Reformed Dogmatics, Vol. 2, p. 98). This commandment safeguards the sanctity of the oath. Oaths and vows are important–at marriage, professing faith in Christ, and taking office. They are to be kept because of God’s name which is involved. Jesus proclaimed all oaths binding (in opposition to the practice of outward conformity, while considering all oaths in another name non-binding), Matthew 23:16-22. To break an oath is to use God’s name in a light, vain way–to misuse it. The commandment is frequently broken as marriage vows or oaths of office are taken with little intent or effort to keep them. Profanity is prohibited. This is an even more common form of breaking the commandment. It treats God’s name, or his prerogatives, in a light and inappropriate way. “O my God,” is used, not to begin a prayer, but as an exclamation of surprise. “God Almighty” or “Jesus Christ,” are not used to invoke God’s name, but to add emotion to what they are saying. The misuse of God’s name is so common that we sometimes tend to fail to hear and fail to be shocked by the profane use of the name of our Creator and Savior in entertainment. We hear it so often, that it is easy for that kind of language to slip into our vocabulary as Christians. Be self-conscious about what you let yourself listen to. Be prepared to address the misuse of God’s name. Do it calmly. A comment such as, “I would have understood you just as well without the profanity” might work. Obscenity is a related sin, which involves swearing by a 21st century idol. Obscene, crude, dirty, language may not actually use God’s name. But it does treat improperly those who are made in the image of God. You take God’s name lightly when God’s name is being used in prayer–and your mind is everywhere but in the throne room of heaven. You take God’s name lightly when you go on autopilot as we sing to the praise of our God. The commandment forms the foundation for all justice and all legal procedure.

God will not hold you guiltless. A special warning is attached to this commandment. Breaking this commandment is one of the most serious problems in the world! That may sound shocking as you look at tensions between North Korea and other nations, atrocities in the Middle East, and the tragic loss of life through abortion in our country. But as serious as those other problems are, God tells you that this sin brings about his special judgment. Man often overlooks this sin, but God will not ignore it. His own name is at stake. At least in the long run, it will be punished. Develop the habit of controlling what comes our of your mouth. Re-read James 3, and ask the Lord for the wisdom from above that is capable of doing what you cannot do in your own strength–reign in an unruly tongue. Reflect on the meaning of what you are saying—and remember that words do have consequences!

Reverence the name of your God. God calls you to truthfulness. Be willing to take proper oaths. Some have misinterpreted Matthew 5:33-37, ignoring the Bible’s instruction and example, to Old Testament saints taking vows – Deuteronomy 23:21-23; Jesus – Matthew 26:63,64; Paul – Romans 9:1; and the Father himself – Hebrews 6:17. Strands of Christianity that have reacted against any oath taking, even in judicial settings, have often also been marked by a mistaken notion that the worship of God (where we use his name) is radically separated from the rest of our life (where we are not to use it). Are you called, “Christian”? You carry the name of your Savior, and with that the names of the other persons of the Trinity. Have you been baptized into the name of the Triune God? God’s name rests on you. How you do your homework either honors or dishonors that name. How you speak to parents (or parents to children, husbands to wives and wives to husbands) either glorifies that name of sounds a discordant note. Protect the sanctity of truth. As God’s covenant people be known for your honesty. For ordinary purposes, let your “yes” be “yes,” and your “no,” no,” James 5:12. Remember that God is truth. Jesus described himself as “the way, the truth, and the life.” “If the name of God is dwelling in a believer by the Spirit, then the believer’s word should be as good as God’s and need no extra swearing. . . . God’s name is a living reality with implications in every area of the life of his people.” (Edmund P. Clowney, How Jesus Transforms the Ten Commandments, p. 41).

Trust in the name that God proclaims. Moses sought to see the glory of the Lord, Exodus 33:18 (a request that was met more fully on the Mount of Transfiguration). God responded by proclaiming his name, Exodus 34:5. That name reflects God’s covenant faithfulness: the Lord, the compassionate and gracious God, etc. Yet the covenant sanctions against sin are reflected as well, Exodus 35:7. Note the connection between this self-proclamation of the name and the giving of the law, Exodus 34:4,5. That law was a fuller revelation of the Name. The commands reveal God’s justice, and the whole sacrificial system proclaimed his gracious character. The giving of that law, as glorious as it was, is overshadowed by the far greater glory of Jesus Christ, 2 Corinthians 3:7-11. In him alone can you find forgiveness for the times you have misused the name of your God. In him alone can you keep this commandment. He enables you to move on to ever increasing glory as trust him, 2 Corinthians 3:18. God himself took an oath, and in the One promised by that solemn promise lies your hope. Your life as a Christian is intertwined with the name of your triune God: “We lift up as a shield God’s name.” (Trinity Hymnal 104), a setting of a prayer attributed to St. Patrick:

I bind unto myself the Name,

The strong Name of the Trinity;

By invocation of the same.

The Three in One, and One in Three,

Of Whom all nature hath creation,

Praise to the Lord of my salvation,

Salvation is of Christ the Lord.

Proclaim the Name! If the name of God is so special, if it truly reflects his character, how can you keep this commandment? Certainly you can and should make every effort to control your tongue. A theme running through the Psalms is that the name of the Lord is so glorious that not just Israel, but the nations must use it in praise. Jesus’ high priestly prayer prays for his name and his Father’s name to be glorified in his work. Luke 24:45-49 gives a version of the great commission. Notice that repentance and forgiveness of sins will be preached in his [Christ’s] name to all nations. That is why you witness to your neighbors. That is why our guest today is involved in making the name known.