The Magnificence of the Son 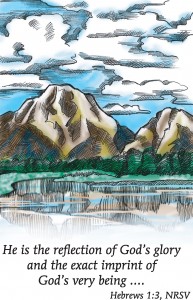 Hebrews 1:3-4 points you to the greatness of Christ by focusing on his name. Christ has inherited a superior name. Christ is Son from all eternity. The superior name Christ inherits is “Son.” Christ is eternally Son. Although v. 4 refers to an acquired, messianic sonship, behind it lies the eternal relationship between the first and second persons of the Trinity. Beware of any denial of the eternal sonship of Jesus Christ. He is the second person of the Trinity from all eternity. The Son is the Maker of the universe, v. 2b. Creation is a function of being God himself. Christ is Creator, John 1:3; Colossians 1:16; and Proverbs 8:27-29. The glory of Isaiah 40 is his. Christ, as your maker, has a sovereign claim on you.

Christ has also inherited the title “Son.” Christ was appointed heir of all things, v. 2. On a specific day he became Son, v. 5, Psalm 2:7. Note the “this day.” We tend to associate this with the incarnation, but although that is an essential element in it, it is not where the focus of Scripture lies regarding this event. In Acts 13:32,33 Paul quotes Psalm 2:7 and ties its fulfillment in with the resurrection of Christ. In Acts 2:33,36 Peter says that Jesus has been made Lord and Christ by the resurrection and ascension. Christ became “Son” because of his messianic work. Christ’s resurrection marks his victory, the end of his humiliation. Hebrews 1:3b refers to Christ’s official work as messiah. Verse 4 is the inheritance of the name, which he receives as a reward upon, and because of, the completion of his messianic work, Philippians 2:5-11. Join in praising Christ for the excellency of his name. “We read that he inherited the title. But such inheritance can only take place in the case of one who is already a Son by nature. Therefore the two senses are connected; because Christ is a Son ontologically, He is qualified to inherit the functional title of Son in the Messianic sense.” (Geerhardus Vos, The Teaching of the Epistle to the Hebrews, p. 75).

Praise the excellent name of your Savior. Keep angels in the proper perspective. The position of angels was important for the original readers. They may have been influenced by Gnosticizing Jewish speculation, where Christ was merely one more point on a chain of beings, a greater angel among others. Rabbinic thinking held angels in high regard as the ones through whom the law had been given. In the Old Testament angels were messengers, means of revelation, servants of God. The original readers (and you) need to know the incomparable superiority of Christ. An army of angels chanted the praise of their Lord outside of Bethlehem. Gabriel came from the presence of God to visit Jerusalem and Nazareth, simply announcing the good news of what God was about to do. The angels are important, they are glorious, holy, and terrifying, but the focus of Scripture is never on them, but on their Lord. Christ is far better than the angels. Hebrews is not comparing them in a moral sense–the angels in heaven are without sin. Rather, Christ, as the Messiah, is far greater than any of the angels. He is not merely a servant or a teacher, but the Savior. Read through the chapter, and note the force of the quotes from the Old Testament.

Praise the glorious Son. He is the radiance of God’s glory. In Christ you see God’s glory, John 1:1,4,5,14. Christ is not merely an abstract reflection of God’s glory, but in the God-man of Galilee the brightness of God’s glory truly shines on earth. You cannot use the excuse of ignorance. He is the very image or representation of God’s person. Christ is the very stamp of God’s nature. He is not just the imprint, but the die that cuts the pattern. Therefore he stamps you in God’s image, Colossians 3:10; Romans 8:29. He upholds all things. The Creator is also the Sustainer, whose power holds things together, Colossians 1:17. Christ is present in his world. He has not abandoned it. There is no room for discouragement or despair.

The Son made purification for sins. The eternal God became man in order to stand in the place of sinners. Christ made purification for sins, by his life, but especially by his death and resurrection. This was a once-for-all event (Hebrews 10:2) in contrast with the Aaronic priesthood. If you stand in awe of Christ’s power, how much more of his grace? He sat down. His earthly work is complete, though, as Hebrews will point out, his heavenly high priestly work continues. This is the fulfillment of Psalm 110, see Ephesians 4:9,10; Philippians 2:9. He is the omnipotent King.

Praise him for his redemptive offices. He is the definitive prophet. In him God has spoken. Do you listen to him? He is the great high priest. Providing purification for your sins was at the heart of what he did. Do you trust his work? He is the omnipotent king. The original readers found that Christ did not appear with the suitable majesty they expected. Hebrews calls them, and you, to trust God’s promises, rather than demanding their fulfillment on your schedule. Do you serve your king?

God has called you to bear witness of the glorious, excellent name of Christ. Because that name belongs to Christ, he gives you the strength to serve him. His victory is yours as well.