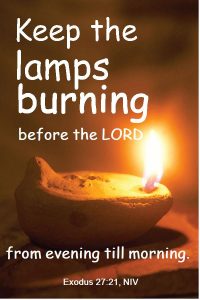 A good architect gives thought to lighting. But the golden lampstand in the holy place of the tabernacle, Exodus 25:31-40, was made for deeper reasons than aesthetics.

The lampstand looks back to the source of light. Light marked the beginning of God’s creative work. “Let there be light” was the creative word of the first day. The same Hebrew noun as is used repeatedly in Genesis 1 is Moses’ choice to describe the light given by the lampstand. When God dwells symbolically in the tabernacle in the midst of the camp of Israel, his sanctuary is not to be in darkness. All night long the lamps were kept burning, Exodus 27:20-21.

The lampstand was made to reflect the perfection of Eden. Without being too speculative, it appears that there is a resemblance, a conscious reflection, between the original tree of life and the lampstand, with blossoms incorporated into its construction. I was formed of gold—75 pounds of gold.

The lampstand looks ahead to the glory of God’s presence. The lamps in the tabernacle (and later the temple) point to the greater light of the new heavens and earth. Eden was a place where man was to have fellowship with God, not only obeying him, but also worshiping him. That fellowship was broken by sin, but God was not willing to leave man to perish. Redemption would come through the Son whom he sent into the world. The goal of his work would be more than forgiving our sins. As important as that was, it served the purpose of restoring fellowship between God and man. That fellowship, imperfect and marred by our sin right now, blossoms into perfection in the new heavens and hearth. The tabernacle and its furnishings, formed after the pattern God showed Moses on the mountain, anticipate the glory of the new, perfect creation. “. . . the ‘tree of life’ itself probably was the model for the lampstand placed directly outside the holy of holies in Israel’s temple: it looked like a small tree trunk with seven protruding branches, three on one side, and three on the other, and one branch going straight up from the trunk in the middle.” “Israel’s tabernacle and temple were a miniature model of God’s huge cosmic temple that was to dominate the heavens and earth at the end of time. That is, the temple was a symbolic model pointing not merely to the present cosmos but also to the new heaven and earth that would be perfectly filled with God’s presence.” (G. K. Beale, A New Testament Biblical Theology, pages 619 & 627). Not only is there no temple in the heavenly Jerusalem (because the whole city is the temple), but the light of the sun and moon is not needed, because God himself is the light. That is what the lampstand anticipates!

The oil burning lamps seal the presence of God by his Spirit. Among the gifts that Israel brought to build and furnish the tabernacle was oil—oil that kept the lamps burning all through the night. The oil was a gift from the people to God, but as is true with all of our giving, we are simply returning a portion of what we have received. The prophetic vision in Zechariah 4 makes clear that source of oil is the Spirit himself. That is something which discouraged Christians need to remember.

Reflect the light of your Lord. Jesus came as the light of the world. John identifies him that way, and in one of his great I am sayings, Jesus claims to be the light of the world, John 8:12. His redemptive work is not just his shinning into our lives. It also involves his rolling back the forces of darkness. The darkness cannot overcome him.

Because he is the light, Jesus calls you to live as lights in the world (Matthew 5:12). That is true of us as individuals. But it also is true of us as a church. In Revelation 1 the glorified Son of Man appears standing in the midst of seven lamps, which are the seven churches to which letters are addressed. Walk in the light, because God is light, 1 John 1:6,7. Walk in fellowship with one another. God has called you out of darkenss into his wonderful light. Live this week as people of light.

The golden lampstand was magnificent and precious. But the true temple today has lamps that are more valuable—the living people of God, serving him and reflecting his light so that the number of the chosen in the new heavens and earth will be complete.