The Bread of Presence 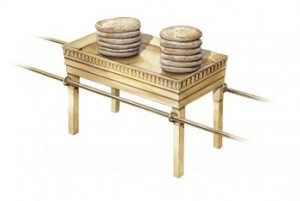 In the tabernacle stood a table—not impressive in size. It was only about three feet long, one and a half wide, and roughly 29 inches high. But it was covered in gold, and it was an important piece of furniture.

The table held bread in the presence of the Lord. The bread of the Presence was not to feed God. That concept was present among surrounding nations—their gods needed food, so the people brought food to the temple. You may hear that theory about the bread (and the sacrifice of animals) in the worship of Israel, but that is not true. God has no need of food from his people, Psalm 50:7-15.

Loaves on the table represented the tribes of Israel before the Lord. The function of the table was to hold a dozen loaves of bread, as Leviticus 24:1-9 reveals. The number is not an accident. There is one loaf for each of the tribes. This is described as the bread of presence, literally the bread of face, or the showbread in older translations. Sabbath after sabbath new loaves were placed on the table and remained there throughout the week. This is described as a lasting covenant. Symbolized in the loaves is the obedience of each tribe, the commitment of Israel to their God. The dishes on the table were made of gold and the table was covered in gold. This is the house of God, the place where he meets with his people, and thus everything is precious. Each item of furniture, as well as the tabernacle as a whole, was made according to the pattern God showed Moses on the mountain. The tabernacle was a movable place where God met with his people, and thus the table had rings into which poles could be inserted for carrying the table as Israel moved from place to place. The bronze altar outside the tabernacle was where the sins of God’s people were forgiven as sacrifices were made. Now, in the Holy Place, where only the priests could enter, the loaves of bread, along with incense, lay on the table. God’s people were offering their lives and themselves in service to the Lord. “Still another application of the idea of the presence of Jehovah in the tabernacle appears in this, that it is the place where the people offer their worship to God. It is the palace of the King in which the people render Him homage. This feature belongs more particularly to the ‘holy place,’ where it is symbolized in the three pieces of furniture there placed, the altar of incense, the table of the bread of the Face (i.e., the Deity in revelation) and the lampholder.” (Geerhardus Vos, Biblical Theology, p. 168).

Live your life in the presence of the Lord. Offer your bodies as a living sacrifice. We no longer have a tabernacle (or temple—in Solomon’s temple there were 10 tables replacing the one in the tabernacle in the wilderness). But the table with the bread of Presence is not just a historical footnote. The Book of Hebrews reminds us that these old ceremonies have been fulfilled in something greater and better. Instead of offering lambs on an altar, we look the Lamb of God, who sacrificed himself once for all for our sins. Instead of baking loaves of bread to place on a table in God’s presence, you offer yourself as a living sacrifice. Paul, in Romans 12:1-2, certainly has in mind the animals that were killed as they were sacrificed on Old Testament altars, but also includes the whole sacrificial system, including the offerings that were expressions of dedication and thanksgiving. Rather than animals, loaves of bread, grain, oil, and wine, the offering you bring is yourself. Paul could have written simply, “offer yourselves.” Be he emphasized, “offer your bodies” as a living sacrifice. There is no part of your person, no part of your life that is excluded. “. . . we are not ‘Spiritual’ in the biblical sense except as the use of our bodies is characterized by conscious, intelligent, consecrated devotion to the service of God.” (John Murray, Commentary on Romans, Vol. 2, p. 112).

Live before the face of God. What the table of the Presence pictured, Paul summons you to do in reality. Focus your life on living in God’s presence. The believer is no longer chained and enslaved by the sinful habits that controlled his life. He is not mastered by porn, laziness, gluttony, and other sin. He has been set free. Romans 12 comes after Paul has described in detail the work of Jesus Christ in the place of sinners. You have been declared not guilty on the basis of his obedience on the cross and his resurrection. You have died to sin and have been raised to a new life of obedience. You are united to your faithful Savior. Paul makes his appeal on the basis of the mercies of God, mercies that you have experienced in Christ. In a real sense, you, the church, are a loaf of bread laid out in God’s presence as an offering of dedication to him.

Carefully baked loaves of bread on a gold-covered table—that is special and precious. But even more valuable, even more pleasing to God is your life lived before his face.