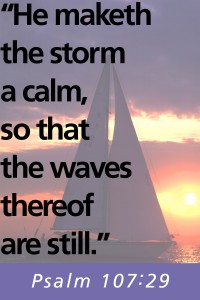 Jesus fed the 5,000. When they wanted make him king by force, he went into the hills, and the disciples got into a boat to cross the northern part of the Sea of Galilee to the town of Capernaum. Jesus in John 6:16-27 was absent not only from the crowds, but he was also from the disciples, who started to sail across the lake without him in the dark. John emphasizes that Jesus had not joined them. Why was Jesus absent from the disciples? Just as the crowd had to learn that Jesus was not an earthly king who would fight the Romans, the disciples had to learn who Jesus really was.

Although some of the disciples were fishermen, familiar with boats and with that lake, they got into trouble. Strong winds come up suddenly on that lake. Rowing in the rough water, they had sailed only a little more than three miles. They seem overwhelmed by darkness and the storm. The glory of Jesus seems to have been replaced by darkness. (This is a different miracle than the one in which Jesus was sleeping in the boat when a storm came up.) Sometimes Jesus uses the most difficult and challenging things in your life and in the life of the church to teach you to understand who he really is.

Psalm 139 reassures you (comforting for the believer, but terrifying for those who reject Christ) that you cannot flee from God’s presence. No matter how far you go, he is with you. The disciples should have been comforted. But that is not the only Psalm that must have come to mind that night. Remember that John emphasized that this was the time of the Passover. God had led his people out of Egypt through the waters of the sea. He had stopped the flow of the Jordan to bring them into the promised land. Psalm 77:19 celebrated that event:

Your path led through the sea,

your way through the mighty waters,

though your footprints were not seen.

The disciples in the boat on the stormy sea saw Jesus walking, not around the lake, but towards them on the water. Jesus makes clear that he is not just an earthly king. He is God himself, coming to redeem his people. When John records that the disciples saw him, he echoes what he wrote in John 1:14, “We have seen his glory.”

Jesus is about to give an extensive sermon on himself as the bread of life. That message will contain some difficult material about feeding on Jesus. But before he gets to that, Jesus shows the disciples who he really is. Herman Ridderbos comments:

They [the disciples] are confronted by another reality, one in which all glory departs from them; darkness and waves tower over them while the safe shore of the other side is still at a distance. In that situation Jesus reveals to them in the absoluteness of his messianic power and authority. . . . And it is faith in that identity to which he wants to lead his disciples, even when they might have to follow him not in the light of his glory but along other roads and under the threat of other powers.