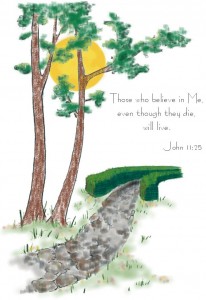 John’s Gospel inextricably connects the Word being made flesh and dwelling among us with the reality of our fallen, broken world. John 11 begins the second half of this Gospel with the miracle of Jesus raising his friend Lazarus from the dead. But the first part of the chapter, verses 1-16 which we are looking at, has Jesus delaying going to his dying friend until after Lazarus died.

See God’s glory in your sickness. Lazarus (not the Lazarus of whom Jesus spoke in Luke 16:20) and his sisters, Mary and Martha, lived in the village of Bethany, just outside Jerusalem. Lazarus lay sick, very seriously ill. Notice how Martha and Mary describe their brother in the message they send to Jesus: “Lord, the one you love is sick.” It is not, “the one who loves you,” or “your disciple,” but “the one you love.” At the heart of your relationship with God is the love of the Lord Jesus Christ to you. J. C. Ryle puts it well, “Christ’s love to us, and not our love to Christ is the blessed truth which we ought continually to keep before our minds. His love never changes: ours is wavering and uncertain.” Jesus loves you individually, just as he offered himself as a sacrifice, not for a mass of mankind, but for each of those whom the Father had given him.

In the illness and death of Lazarus Jesus is dealing with something universal. All of us, even those whom Jesus loves, face illness, and, unless he returns first, will face death. Death and sickness are the result of the fall. Until the return of Christ, these will be part of your life. Sickness is not God punishing you. A child may ask, is God angry with me because I’m sick? His glory and your good are what he is working out even in the things that are not good themselves.

What Jesus says about Lazarus undermines the health and wealth gospel of some televangelists: God does not want you to have any illness, any suffering, any poverty. One proclaims that God is about to transfer huge amounts of wealth from sinners to the righteous. And somehow God’s people seem to be identified as those who have responded to the televangelist’s invitation to send in $111 as seed faith.

When you are sick or going through some other trial, don’t assume that God is punishing you. He may chastize his children (as he did the Corinthians who were dealing loosely with the Lord’s Table), but he does not punish them. Your punishment has been borne by Christ if you trust in him. Although any trial or suffering is a good opportunity to ask yourself if there is something that God is teaching you through this, be careful not to fall into a self-centered focus. Instead, look for ways for God to be glorified through what is happening. Ask God for relief from your sickness and suffering. David certainly cried out in Psalm 31, but he did so throwing himself on the mercy of his God.

Entrust yourself to the hands of the Savior, knowing that he does all things well. Ryle says: “Let us believe that He by whom all things were made at first is He who is managing all with perfect wisdom. The affairs of kingdoms, families, and private individuals, are all alike overruled by Him. He chooses all the portions of His people. When we are sick, it is because He knows it to be for our good: when He delays coming to help us, it is for some wise reason. The hand that was nailed to the cross is too wise and loving to smite without a needs-be, or to keep us waiting for relief without cause.”

You see the love of Jesus and his humanity. When he does go to Bethany, he says that he is glad he was not there–for the sake of the disciples. This event would strengthen their faith. Had he gone before the death of Lazarus, could he have refused the requests to heal? You see the humanity of your Lord in his desire to go in response to the request, and yet the overriding desire to do his Father’s will.

This chapter of John’s Gospel shows you that Jesus wept–and thus it is appropriate for you to grieve in the face of death. It is a conquered enemy, but it is still the last enemy we face in our earthly lives. And yet, because of what Christ was going to do in Jerusalem before long, triggered in part by the reaction to this miracle, death for the believer is sleep.

Believe in the face of death, because God’s Son is glorified. This chapter is not primarily about sickness and death, though you learn a great deal about them here. It is not first of all about Martha, Mary, or even Lazarus. It is about the Savior and his great miracle. This is the last miracle (except for the resurrection of Jesus) recorded in John’s Gospel. It parallels the first one, recorded in John 2.

The delay in going to Bethany was “so that you might believe” (v. 15). He summons Martha to believe, v. 26. And his prayer is aloud so that those witnessing the miracle might believe (v. 42). The comfort of this chapter is yours only if you believe in Jesus. For those outside of him, death is not just sleep. It is the beginning of eternal separation from God. For those outside of Christ illness is not something that God uses for their good, but it’s a piece of the ultimate judgment. There are eternal consequences to how you respond to this sign that Jesus performs.

When the disciples question his decision to travel to Bethany, Jesus speaks of walking in the light. The light of his earthly ministry was still shining. The hour of darkness, his own suffering and death, had not yet come. The raising of Lazarus is a small foretaste of the glory of the final resurrection. Jesus, by his death and resurrection, would break the enslaving power of sin and free you and all his people from both its guilt and its effects. In this miracle the Father would reveal the glory of his Son in a powerful way. That display would intensify the opposition of his enemies. But it confirms that the Son will be triumphant, not just in rasing Lazarus, but in his own resurrection as well. As you believe in Jesus, his triumph becomes yours as well.

How can you see your sickness as something to the glory of God? Because you are united to Christ by faith, you are united with him in suffering as well as in glory. He is with you in your sickness. He will not abandon you when you face death. He is central as you are glorified.