See Your World the Way Christ Does! 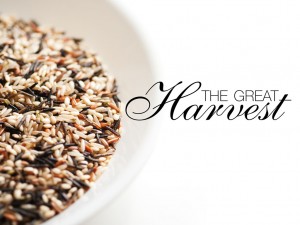 Do you see the world the way that Jesus does? As you come to the end of John’s account of Jesus speaking with the Samaritan woman, found in John 4:27-42, Jesus commands his disciples to look at the harvest. The disciples, who have returned with food they had bought in the village, urge Jesus to eat. But the focus of the Lord is on the harvest, a harvest to which his disciples are oblivious, but which he sees as ready for reaping.

The harvest is ready because the seed has already been sown. Jesus had initiated a conversation with the woman at the well. He had offered her living water. He had revealed to her that he is the Messiah. Leaving her water jug, she had run back into the village, inviting people to come and meet Jesus. Her “Here is a man who told me everything I ever did,” intrigued the villagers, and they came to see if this could possibly be the Christ.

Jesus speaks of the disciples reaping what others have sown. He may well be thinking, not only of his conversation with the woman, but also of the preparatory work of John the Baptist and the work of the Old Testament prophets, all leading up to his work as Savior. And John, the author of the Gospel, in recording the words of Jesus, is reminding the Christian community of his day (and ours) of the planting work that had been done by Jesus and the apostles. The absolutely crucial work has been accomplished by Jesus, who did the will of the one who sent him.

This harvest won’t wait. Although some have tried to speculate as to just when in the calendar year Jesus was speaking when he referred to “four months more and then the harvest,” it seems more likely that Jesus was using a proverbial saying that recognized that one cannot rush the harvest. Of course Jesus is referring not to reaping grain, but to the bringing into the kingdom the Samaritans who were coming out to him as he spoke with his disciples. This is a “crop for eternal life.”

The disciples who had just been in the village returned with some food, oblivious of the harvest that Jesus saw. The Samaritan woman came back with people, hungry for the Savior, thirsty for the living water. What do you see when you look around you? A place to buy food? A place to work? A place to live? Or do you see the harvest? Jesus is warning you that you don’t have leisure time in the work of this harvest. The time for reaping is now!

When Jesus speaks of the harvest he is pointing to himself as the fulfillment of the rich imagery used by the Old Testament prophets. God’s grace to the Gentile world, anticipated in many of those in the Samaritan village coming to faith in Christ, is not a second thought or a “Plan B.” Rather it is the harvest for which God had planned and to secure which he sent his Son into the world.

Accomplishing the will of the one who sent him is so important to the Savior that he calls it his food. Serving the Father, doing his will, bringing in the harvest, is more important than the crucial activity of eating. John Calvin comments: “The office of Christ . . . was to advance the kingdom of God, to restore to life lost souls, to spread the light of the Gospel, and, in short, to bring salvation to the world. The excellence of these things caused him, when fatigued and hungry, to forget meat and drink. Yet we derive from this no ordinary consolation, when we learn that Christ was so anxious about the salvation of men, that it gave him the highest delight to procure it; for we cannot doubt that he is now actuated by similar feelings towards us.” (At John 4:34)

The church today, equipped with the Holy Spirit who was poured out at Pentecost, continues to labor in God’s field, as Paul points out in 1 Corinthians 3:5-9. The work may be difficult at times, but even the prophets looked forward to God’s rich blessing so that the sower and reaper might rejoice together, Leviticus 26:5; Amos 9:13.

After Jesus cleanses the temple, John (in John 2:23-25) introduces a series of conversations about faith. Jesus spoke with Nicodemus, with the Samaritan woman, the disciples, and now the residents of Sychar. Here in a small village of people who had an incomplete and erroneous view of God, Jesus finds a harvest and draws people to himself. And here, as they come to believe in him, they confess, “This man really is the Savior of the world”! See your world and your neighborhood the way that Jesus does so that many more come to join in that confession.