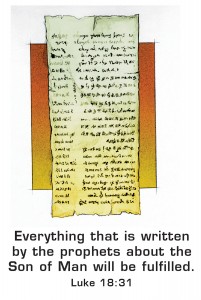 “We’re drinking a cocktail that’s a mix of the Protestant work ethic, the American dream, and the gospel. And we’ve intertwined them so completely that we can’t tell them apart anymore. Our gospel has become a gospel of following your dreams and being good so God will make all your dreams come true.” Those are the words of Phil Vischer, creator of VeggieTales, in an interview last year. Humbled by the bankruptcy of the company he had founded in the ’90s, he has come to realize “I had spent 10 years trying to convince kids to behave Christianly without actually teaching them Christianity.” You can have something that is very religious, that even seems “Christian,” but actually distances you from Christ.

Jesus had healed a lame man on the Sabbath, and then compared his work to the continuing work of his Father–so his critics accused him of blasphemy. In John 5:39-47 he warns his Scripture-searching critics that they are guilty of failing to believe in the One who is revealed in the very Scriptures they are searching!

Jesus’ critics were experts in the Scriptures, especially in the treasured books of Moses. Their knowledge of the contents would put almost any of us to shame. Give them a passage, and they could quote the opinions of three different rabbis on its interpretation. They thought that because they had the right understanding of Scripture, because they were so scrupulous in obeying its details, that they had eternal life. They searched the Scriptures, but were blind to the Messiah revealed in them, the Savior who now stood before them!

The Orthodox Presbyterian Church and the local congregation I serve, Trinity Presbyterian Church, take very seriously the authority of Scripture. We understand the importance of checking our beliefs by the standard of God’s inerrant Word. We encourage families to read and study the Bible together. But, if we think that we have any standing before God because we have our system in order, because we are trying hard to be faithful Christians, we have fallen into the same error that Jesus condemns in John 5. He calls it what it is–unbelief. If we think that having our order of worship in just the right balance or our philosophical principles finely tuned make us anymore righteous, we have deceived ourselves.

Jesus digs to the problem underneath the problem: an inordinately high respect for the praise of men. You see the severe pressure to conform in those circles displayed towards Nicodemus (John 7), the man born blind and his family (John 9), and Joseph of Arimathea who buried Jesus (John 19). How can leaders in mainline denominations ignore the clear teaching of Scripture and approve for ordination those who openly espouse an immoral life style? Because they are afraid of what their peers will think of them. But we face the problem on many levels. Will my neighbors or co-workers think I’m a kook if I take a stand for biblical convictions? Does the opinion of my boyfriend or girlfriend stand in the way of my doing what I know God requires? J. C. Ryle points out: “If a man . . . secretly cherishes any idol which he is resolved not to give up–if he privately cares for anything more than God’s praise–he will go on to the end of his days doubting, perplexed, dissatisfied, and restless, and will never find the way to peace” (Expository Thoughts on the Gospel of John).

What is the remedy? Jesus calls you to believe the testimony of the Scriptures. Interestingly, though Jesus says the “Scriptures testify about me,” and Moses “wrote about me,” he does not supply a couple hundred proof texts. In fact, he dos not point you to any one specific passage in the books of Moses or the rest of the Old Testament Scriptures, for they all focus on him, as, after his resurrection, he told the two disciples on the road to Emmaus. Don’t take the words of Jesus as minimizing the importance of reading and studying the Word. Rather, see your Lord revealed on every page.

What counteracts a self-exultant undue respect for the praise of men? Understand the greatness and glory of your God. John wrote his Gospel so that you can meet, know, and trust in Jesus in all his glory. When you grasp that, then indeed you will want to worship him with the best that you have to offer. You will strive to submit every thought to him. You’ll be careful that your doctrines serve to glorify him. But all of that is the doxological result of God working in you, whom he has redeemed in his Son. The Lord has a wonderful way of shaking you out of your doubt, self-centeredness, and complacency. Have you truly seen Jesus in the Scriptures?